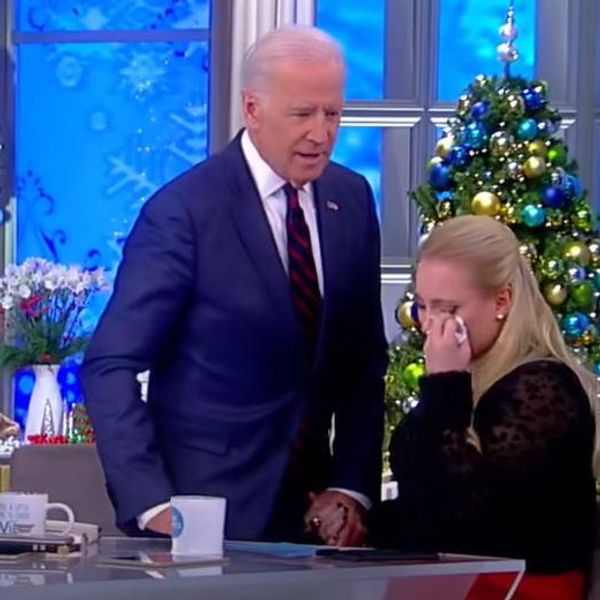 What is legacy famous person Meghan McCain up to these days? Oh, you know. Marriage. Motherhood. Writing. Possibly selling patterns for her weird hairstyles on Etsy.

Also, carrying forward her birthright of being a world-class asshole.

Megs recently went a few rounds with COVID, the current heavyweight champ of respiratory viruses and the reason yr Wonkette does most of our drinking at home these days. By the sounds of the column she wrote about it for The Daily Mail, she had a pretty rough bout. She says she's still feeling the effects weeks later — she's easily fatigued and has no sense of taste or smell.

As for her lack of class, that was one of those pre-existing comorbidities that is not always fatal but will result in writing shirty columns with titles such as:

I finally got Covid and it was so horrible it made me doubt if America will ever recover from this pandemic. It WILL but not with moronic Biden in charge

Lest you think that maybe an editor wrote that headline, well, that's probably correct. But describing President Joe Biden as "moronic" is all Meghan. As in:

Biden and his feckless, moronic, isolated Titanic of an administration gets the blame now.

Biden may not believe in morning in America, but I sure as hell still do, just not under his failed leadership.

Here is where we note that the country is nowhere near shut down. Schools are open. Restaurants are open. Stores are open. Movie theaters are open. Concert halls are open. Sporting events have packed houses. Airplanes are flying at full capacity. The economy is booming. Republicans are electing amiable, cruel dunces in purple states.

In short, America is back to its mindless, poor-hating, environment-destroying self. The only difference is sometimes you have to wear a surgical mask while sashaying along the Freedom Road.

You wouldn't have to wear a surgical mask to do all of this, and Meghan might not have caught what was likely the highly contagious Omicron variant that has emerged in the last few months, if certain conservatives had offered a modicum of cooperation with the president. Instead, the official Republican television outlet Fox News — where, not coincidentally, Meghan's husband is employed as a talking, very doughy head — and certain rightwing "news" sites — like the Federalist, which is owned and published by the aforementioned doughy head that sleeps next to Meghan every night — had not spent the last two years undercutting the fight at every opportunity.

What makes Meghan's usual bit of wingnut offal so particularly ridiculous, however, is that Joe Biden was such a friend of her sainted father that when the elder McCain died, Biden went on The View and comforted Meghan while she cried over a story about how her dad bonded with Beau Biden when the younger man was dying of the same cancer that later killed the senator from Arizona.

Seriously! He did this on national fucking television! Old Handsome Joe Biden!

This is Joe Biden comforting Meghan McCain whom he has known and loved for her whole life. Today Meghan called him a moron. #TheView #JoeBidenpic.twitter.com/uPG9O0AU9R
— Nicolette NuVogue (@Nicolette NuVogue) 1643251180

Yr Wonkette cannot imagine the void one must have in the soul to repay such kindness by publicly trashing a man as a "feckless moron" in a widely read opinion column. Even if we wanted to put all the blame for the continued pandemic on his shoulders.

But then, that has been the story of the right for two years now: abject uselessness laced with whiny cruelty.

Wonkette loves you so much we brought back Gary Legum. Pay him for us, if you are able!