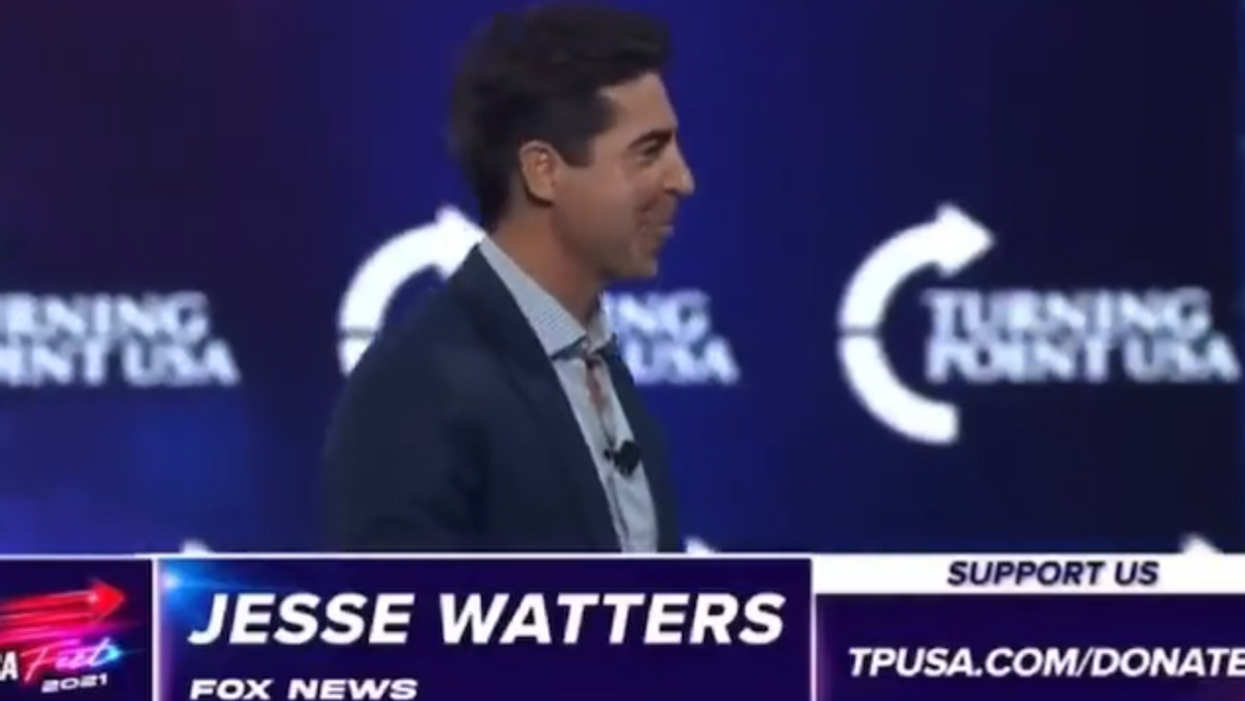 Charlie Kirk's festival of white guys who definitely aren't all signed on to Grindr right now with no pics and saying they're "discreet" and "masc" continues to produce winning video clips! But if Fox News had any principles, the one we're about to talk about might get somebody fired.

We are of course talking about Fox News's Jesse Watters, who used some really colorful and violent rhetoric to teach a crowd how to "ambush" and "kill-shot" Dr. Anthony Fauci. WITH QUESTIONS, obviously! Not with guns! WORD QUESTIONS! This is a crowd, we should mention, which maybe 24 hours before had a spontaneous orgasm all over itself when gun-happy Kyle Rittenhouse walked onstage.

These folks are definitely known for their nuanced word questions.

The incendiary, dangerous, violent rhetoric against Dr. Fauci continues at AmericaFest. Fox News host Jesse Watters tells them how to go after him to harass him in public: \u201cNow you go in with the kill shot - deadly. Because, with an ambush, he doesn\u2019t see it coming.\u201dpic.twitter.com/V34YZwDdPD
— Ron Filipkowski (@Ron Filipkowski) 1640034857

WATTERS: Now you go in for the kill-shot. The kill-shot, with an ambush? Deadly. Because he doesn't see it coming. This is when you say, Dr. Fauci, you funded risky research at a ... "

Of course, it's adorable Jesse Watters thinks these morons listening to him are clever enough to win an argument with Dr. Fauci. Even one where they "ambush" him with a "kill-shot" that's actually just a turd-shaped rightwing talking point that gets debunked every time it squeezes its way out of Rand Paul's or Ted Cruz's face hole. Watters really thinks Fauci wouldn't see that galaxy brain argument coming at him. Sure thing, dude.

Watters explained that if you say the rightwing talking point to Fauci at a restaurant, then ...

Now, some are pointing out, and we concede, that watching the full clip, it is very clear Watters is teaching the white power rangers in the audience to take the BOOM HE IS DEAD THIRTY SECONDS! video clips they get and mail them to Tucker or the Daily Caller, so they may be the new viral sensation for owning the libs. (He said he was "deputizing you guys to be little James O'Keefes.") Some are making good arguments that Watters is giving us a unique look — a master class, if you will — into how the rightwing bullshit outrage du jour sausage is made.

But we think there's other context that's important. For instance, the audience for Charlie Kirk's Caucasian Vaudeville incel sextravaganza, which Watters was addressing, is pretty much an ideological carbon copy of the terrorists who attacked the US Capitol on January 6, with Congress and the vice president inside, to overthrow an election they lost. We might note that Charlie Kirk's organization has a variety of ties with what happened that day in DC.

Literally yesterday, an audience member at the same event asked Trump Not-A-Nazi Sebastian Gorka when will it be time to use the Second Amendment to overthrow the government. Gorka said civil war would be very bad, but "If somebody tries to take our liberty I'm not afraid of the people who are afraid of guns." (He didn't mention whether he was afraid of the gabillions of liberal gun-owners who aren't afraid of guns, but just don't wave them everywhere because they don't have a psychological need to use them as penis-substitutes.)

Of course, Jesse Watters himself should know better, since he was Bill O'Reilly's main coffee boy when O'Reilly was leading what Gawker called a "holy war" against Dr. George Tiller, an abortion doctor who was one of the most compassionate medical professionals this country has ever seen, who fought for and protected and cared for patients experiencing tragedies with pregnancies that you wouldn't wish on your worst enemy. You know, until May 31, 2009, after months of O'Reilly segments about "Tiller the baby-killer," when a rightwing terrorist entered Tiller's church and assassinated him.

We might note that Watters should have learned his lesson back then.

Or, with a cynical smirk on our face, we might wonder aloud whether he DID learn his lesson — just not the lesson decent or good people would take from the experience.

Dr. Fauci said on CNN today that Watters should be "fired on the spot," but said regrettably that probably won't happen. (Fox News is defending him, actually.)

Media Matters has a huge roundup on all the deranged and disgusting attacks Fox News has lobbed at Fauci. It goes way deeper than Fox's recent questions about whether Fauci is Mussolini or Josef Mengele. With the exception of Lara Logan being mostly absent ever since the Mengele comments, there hasn't been much accountability to speak of. But that's part of the context here too.

But don't worry, Watters only wants people to ambush and kill-shot that guy with clever questions!

And, well, if something else happens, it definitely won't be Jesse Watters's fault, because it never is.