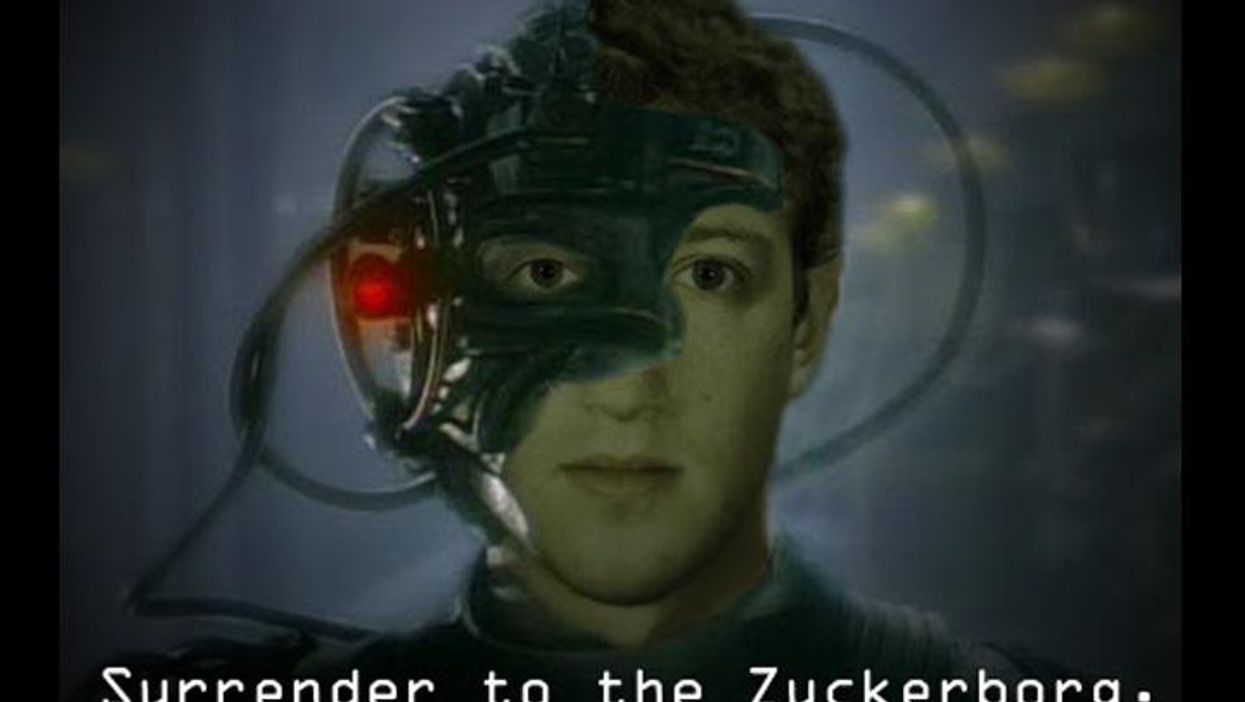 Back in October, which only feels like 30 years ago, former Facebook product manager Frances Haugen went public with a mess of internal Facebook documents showing that the company is every bit as evil as most people think it is. (Except for the folks who think Facebook is out to "silence conservatives." They're still bugfuck crazy.) In particular, Haugen shared documents with the Wall Street Journal, which published a series of articles called "The Facebook Files" and revealed that Facebook's own internal researchers had determined the company's algorithm worked "best" when it drove anger and political radicalization, and that Instagram, owned by Facebook, could be very bad for teen girls' mental health.

Facebook publicly responded by saying "nuh-UH!" a lot and pretending the real scandal was the harm done to to the kind, warm wonderful people who work for Facebook. Also, the company immediately changed its name to "Meta" so everyone on Twitter could make fun jokes about metafiction, metaphors, and Metatron, the dickless angel of the Lord played by Alan Rickman in that fun comedy about Catholic canon law. Facebook CEO Mark Zuckergberg insisted Facebook was now a virtual reality company, and explained the company's Brave New Virtual World in a disturbing videoconference where his remarkably accurate avatar — the eyes are just the right shade of soulless! — wore skeleton pajamas. 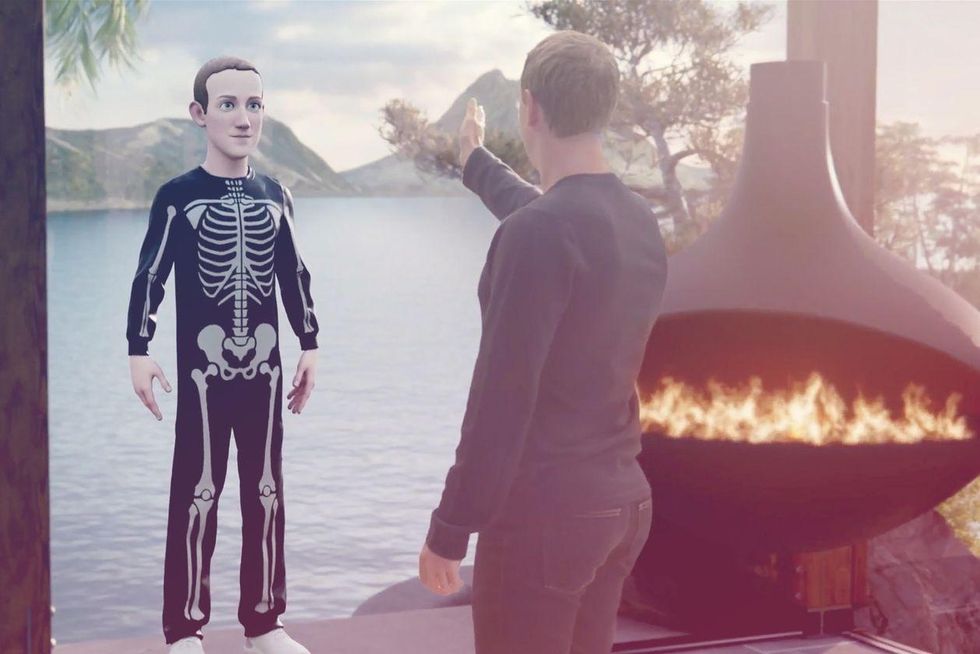 Also too, as the Journal reported yesterday, Facebook's team in Washington DC immediately got to work ginning up anger with rightwing media outlets and Republicans, spreading the impression that Haugen was no whistleblower who was sick of how Facebook operates — no, she was a Democrat mole motivated by her far left ideology! Then the same lobbyists worked the phones calling Democrats to warn that Republicans were up to no good, too:

To lawmakers and advocacy groups on the right, according to people familiar with the conversations, their message was that Ms. Haugen was trying to help Democrats. Within hours, several conservative news outlets published stories alleging Ms. Haugen was a Democratic activist.

Later, Facebook lobbyists warned Democratic staffers that Republicans were focused on the company’s decision to ban expressions of support for Kyle Rittenhouse, the teenager who killed two people during unrest in Kenosha, Wis., and who was later acquitted of homicide and other charges.

The goal, the Journal reports, was to shift the discussion away from what Haugen had actually revealed, and instead to "to muddy the waters, divide lawmakers along partisan lines and forestall a cross-party alliance that was emerging to enact tougher rules on social-media companies in general and Facebook in particular."

The story details how Zuckerberg shifted from his usual approach when Facebook got in hot water — apologize to Congress, pledge to do better, and keep making money by stirring division and hate-clicks — to pure pushback. Facebook's internal research teams started being watched more closely, both to prevent leaks and to steer them away from research that might make the company look bad, and Zuckerberg told employees they should not apologize for anything, because Facebook is good and only a dirty liar would say otherwise.

“When our work is being mischaracterized, we’re not going to apologize,” said Facebook spokesman Andy Stone. “We’re going to defend our record.”

The internal politics at Metaface are interesting; members of the company's "safety advisory board" were apparently blindsided by the whistleblower stories, and insiders told the Journal that Facebook hadn't even informed the safety board of

its research into Instagram’s effects on teen girls, nor had it disclosed the relatively small amount of resources committed to protect users in developing countries, those people said.

Some members of the advisory board talked about quitting, and eventually some of them drafted a letter laying out their very strong concerns to the company.

The draft letter recommended that Facebook overhaul its business model; appoint an executive focused on safety to report to the CEO; make more internal data available to independent researchers; and clearly explain what kind of regulation they could stomach.

Ultimately, though, nobody on the safety board resigned in protest, and the letter was never sent. Also, hey, look at these cool new virtual clothes your Meta avatar can wear! The "Profiles in Courage" virtual tees are especially striking.

The story offers a few more details on the efforts to spin Haugen as a Democratic operative, which of course got picked up in multiple rightwing media outlets like Ben Shapiro's Daily Culture War Freakout and others.

The articles variously called Ms. Haugen “the frontwoman of a PR campaign pushed by the Democratic party,” a “leftist activist” and someone who is “part of a broader Democratic initiative.”

We also learn that some calls to wingnut media came from Josh Althouse, a former congressional aide to Paul Ryan who now serves as a "public-policy manager" in Meatface's Washington office, meaning he schmoozes with prominent Republicans on behalf of the company.

Haugen, for her part, has said from the start that she has no strong partisan ties, and that she's met with lawmakers from both parties who are interested in making Fleasbook get its shit together and stop wrecking America. And despite Facebook's lobbying efforts, there really do seem to be some strange bedfellows coming together, though perhaps it's more of a virtual bed, because ew:

“Their biggest fear has been conservatives and liberals coming together to break up their so-called family of apps, and it could very well be coming very soon,” said David Bozell, president of ForAmerica, a conservative group that creates political content on social media. “It’s not every day that [Republican] Mike Lee, [Democrat] Amy Klobuchar and [Republican] Ken Buck get together and break bread on these things—on anything.”

So maybe there'll be legislation, maybe not; on the whole, it looks like Europe is far more likely to try to rein in Zuckerberg and his band of merry pirates, but it's nice to dream. The Journal piece closes by noting that since the scandal in October, employee confidence in the Zuckernaut they work for briefly slipped, but has largely returned:

Within a couple of months, questions about compensation and benefits surpassed societal issues in the rankings of questions submitted to executives before the company’s weekly question-and-answer session.

On Nov. 18, the most popular question was: “Will our yearly salary raises reflect the increased levels of inflation we’ve been seeing?”

The Failboat sails on, with no signs that any rats are headed for the portholes.

Yr Wonkette is funded entirely by reader donations. If you can, please give $5 or $10 a month so we can keep you up to date on all the latest developments in antisocial media.