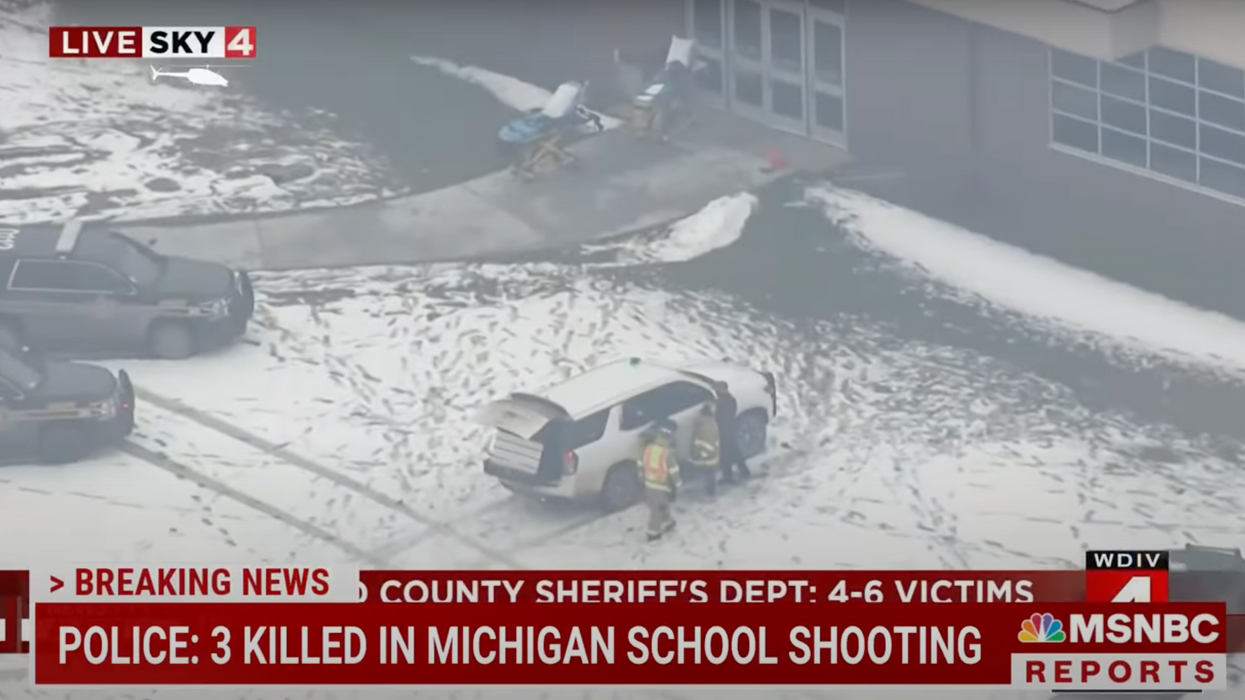 Tuesday added another school shooting to an already bloody ledger. A 15-year-old sophomore at Oxford High School in suburban Detroit shot and killed three students and injured eight others, including a teacher.

Oakland County Undersheriff Michael McCabe described the victims as a 16-year-old boy, a 14-year-old girl and a 17-year-old girl. The eight wounded were hospitalized. At least two were in surgery, and their conditions were unclear as of Tuesday afternoon. There’s video footage of the gunman coming out of the bathroom with a semi-automatic handgun before starting his rampage. So far, there’s no indication of any motive.

McCabe confirmed during a news conference that the shooter was taken into custody.

"Deputies confronted him, he had the weapon on him and deputies took him into custody," McCabe said of the semi-automatic handgun. "The whole thing lasted five minutes.”

No, the “whole thing” will last forever. It will haunt the victims’ loved ones for the rest of their lives. The survivors will also never forget.

Authorities did not say what led to the shooting, and McCabe told reporters that the suspect "invoked his right to not speak." Police briefly spoke to the suspect's parents, who McCabe said advised their son not to speak to police.

“He’s not telling us anything at this point in time,” he said.

What is there to say? He’s a child who never should have had access to a semi-automatic handgun. It’s that devastatingly simple, but we can expect the usual rightwing deflections. It’s not this country’s peculiar obsession with guns that leads to gun violence. No, it’s because feminists give men the sads or maybe something involving single moms. Oh, and there’s not enough Jesus in schools.

The suspect’s father reportedly bought the gun just last Friday. He should probably also exercise his Miranda rights. His Black Friday purchase made no one safer. That’s how guns work. They just make everything worse.

We have a responsibility to do all we can to protect\u00a0each other, and we have the tools to reduce gun violence. No one should\u00a0be afraid to go\u00a0to school, work, a\u00a0house\u00a0of worship, or even their own home. This is a time for us to come together and help children feel safe at school.
— Governor Gretchen Whitmer (@Governor Gretchen Whitmer) 1638308264

Michigan Governor Gretchen Whitmer, like President Joe Biden, said all the correct things from the Big Book of Senseless Gun Violence. She thanked the first responders and expressed empathy for the families and community. She choked up at one point and, close to tears, called the shooting "a uniquely American problem that we need to address,” and the fact that this country never will should make us all weep.

Here are some children using deductive reasoning to see if the person outside their classroom door was a sheriff or the shooter.

A student from inside Oxford High School captured this footage of the possible shooter trying to get into the classroom by impersonating a sheriff\n\nThe students did not open the door and escaped through a window\n\nhttps://www.tiktok.com/@shwifty766/video/7036463957997030702\u00a0\u2026pic.twitter.com/gQWOuJPAAL
— philip lewis (@philip lewis) 1638309430

On Anderson Cooper’s show last night, one of the survivors, Aiden Page, a senior at Oxford High School, described the horrifying scene. Page and some other students used their school desks to barricade the door and keep out the gunman, who was so close a bullet struck one of the desks.

"We heard two gunshots and after that, my teacher ran into the room, locked it, we barricaded and then we covered the windows and hid," [Page] said. The class was on lockdown for an hour, Page said. During that time, some students armed themselves with whatever they could find.

Page is about the same age as some of the survivors of the mass shooting at Marjory Stoneman Douglas High School in Parkland, Florida. That was just three years ago, and the deranged woman who stalked one of the Parkland survivors because he dared advocate for gun control is now a member of Congress.

In December 2012, a gunman massacred 26 people at Sandy Hook Elementary in Newton, Connecticut, including 20 children between the ages of six and seven. Not a single gun law was passed in the aftermath. Guns remained just as easy for killers to access. It is now December 2021, a little over a year since the start of the Big Lie about election fraud, and dozens of voter suppression laws have been passed to make accessing the ballot harder. It’s clear what matters most to Republicans — power and control.

They talk about the “sanctity of life” as a pretense for exerting power over people’s bodies and controlling when and how they reproduce. Senator Chris Murphy from Connecticut delivered some scathing remarks Tuesday on the Senate floor, and while it’s usually pointless to bother calling out Republican hypocrisy as Republicans are devoid of shame, Murphy’s words are heartfelt and worth hearing. Maybe we will all get angry enough to finally tell the tools of the gun lobby “Enough!”