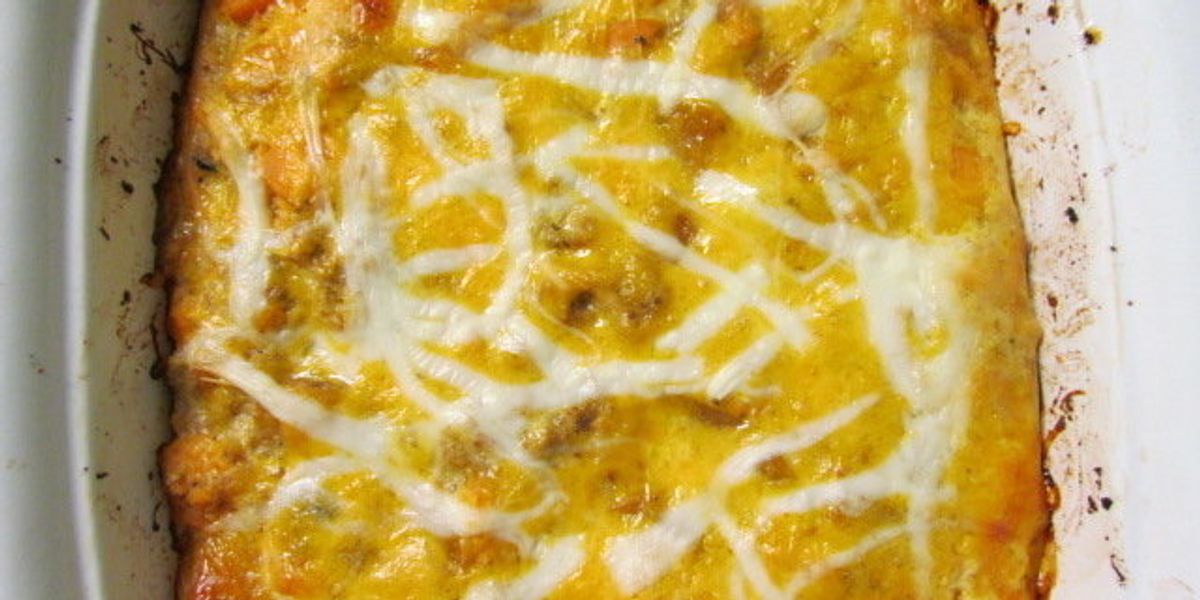 [Editrix's note: I made this last year, and the year before that, and ate it for every meal until all the components were gone. It is absolutely delicious, and I don't even particularly like Thanksgiving food. So have at it, and you're welcome.]

Are your Thanksgiving guests still lingering? Maybe if you feed them a hearty breakfast and tell them the leftovers are all gone, they'll get the fuck out. Regardless, this recipe is an excellent morning-time use of leftover stuffing. Strata is Latin for "breakfast casserole." You can use either term, depending on the level of pretense you like to serve with your food. I like to go for the maximum, especially when it's a dish as simple to prepare as this one.

This one doesn't have any meat, but you may include leftover turkey or any kind of breakfast meat you like (and maybe your leftover stuffing has some kind of meat in it). If you had a ham on Thanksgiving, throw in a handful of ham cubes. If you want sausage or bacon in it, cook them first in a skillet and drain the fat.

You can put this together in the evening and bake it in the morning. Just remember to take it out of the fridge for a little while before you put it in the hot oven. Also remember to remove the plastic wrap before putting it in the oven.

2 cups or so of leftover stuffing

Enough grated cheese to cover the casserole plus a little more (any good melting cheese will do; Swiss is a popular choice, but today we've got cheddar and a stick of string cheese)

Beat the eggs and milk together, with a little salt and pepper.

Put the stuffing in the casserole in big chunks. Mix in the "plus a little more" of cheese. 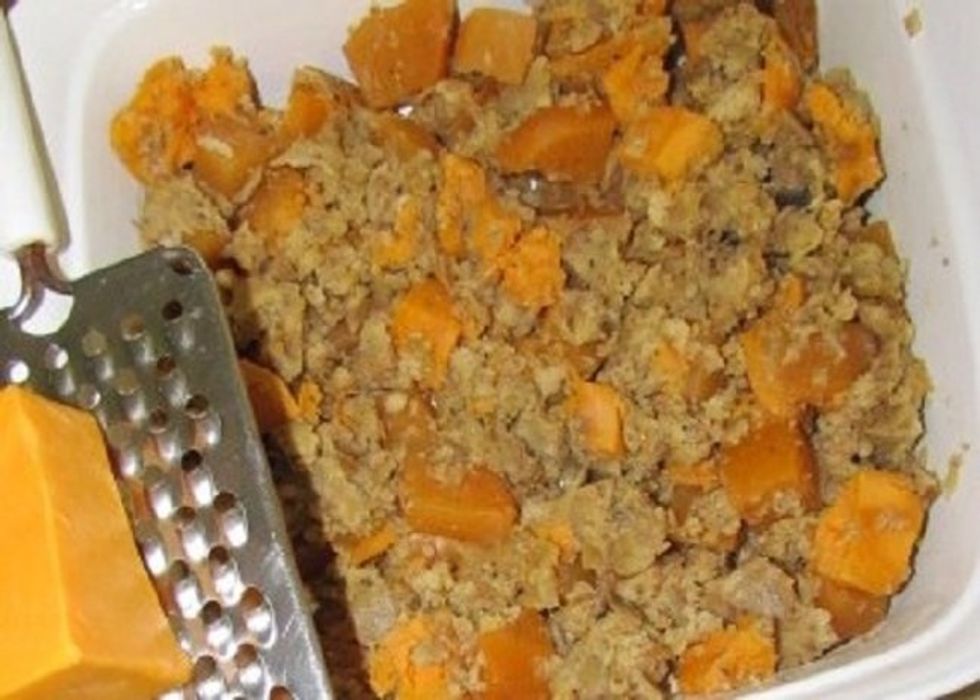 Pour the egg and milk mixture over the stuffing. Let the stuffing soak up all that good stuff for a few minutes. Alternatively, if you're preparing this the night before, cover the dish with plastic wrap and refrigerate. 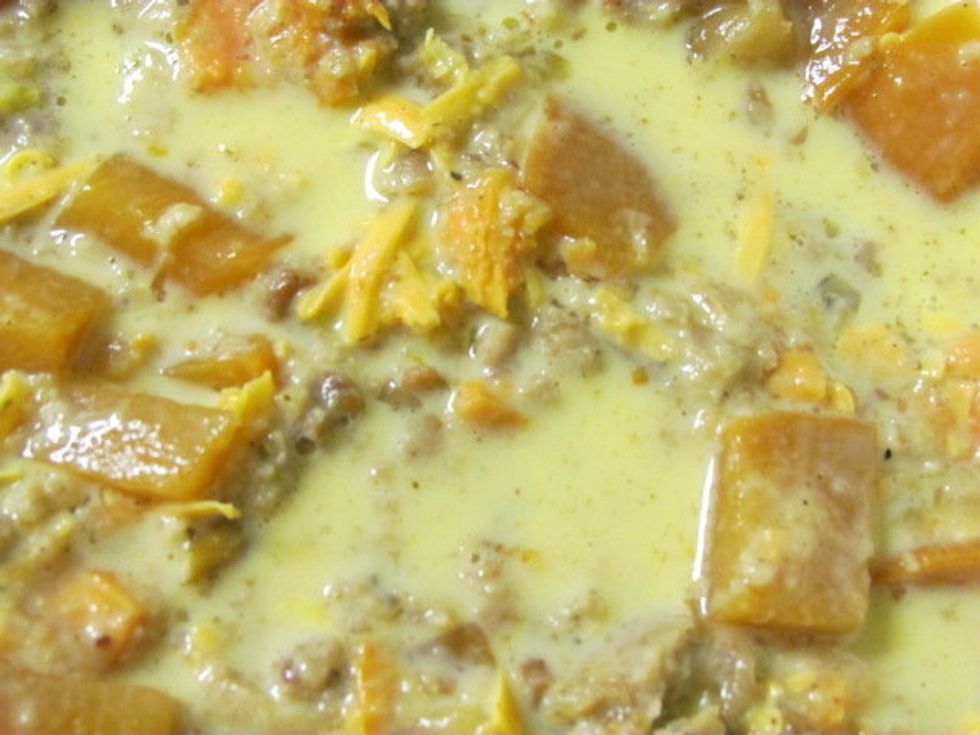 Sprinkle the cheese over the top of the casserole.

Bake in a 375 oven for about 40 minutes, until the filling is firmly set.

Enjoy with a Bloody Mary.

Yr Wonkette, like Yossarian, intends to live forever or die trying. Help us do that by donating! Your contributions are the thing that keeps us going! 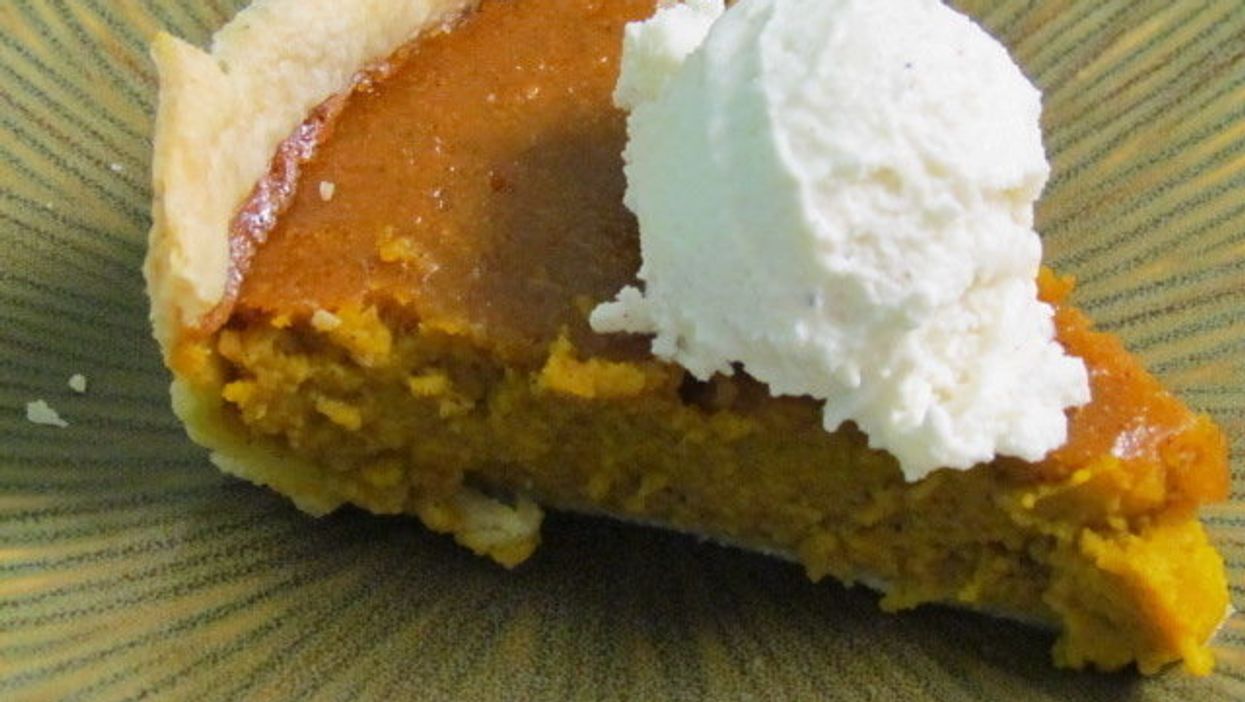 Just last week, you were talking to your Thanksgiving host, and you made the mistake of being polite and asking if there is anything you can bring. And she said, "Oh, you're so thoughtful; something for dessert would be great!" So demanding! Do not fret. Today we share with you (for you to share with your friends on social media) a Buttercup Squash Pie recipe, so you can say, "As you wish." 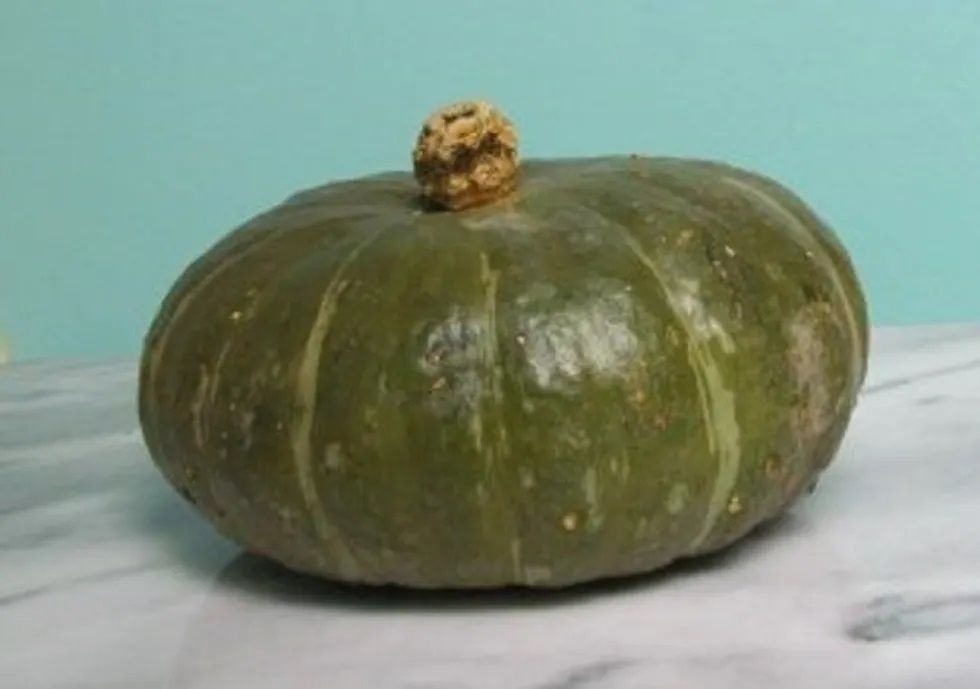 Yes, it's very similar to pumpkin or sweet potato pie, but it's different enough to generate conversation and non-traditional enough to deter your reactionary uncle from even tasting it. Buttercup squash are squat, ugly little bastards. If you can't find one, you can do this with butternut or acorn squash, or some combination of all of them. We're using buttercup squash mostly because we love Gilbert and Sullivan.

1 pie dough in a pie pan (Here's Mojopo's recipe, but you only need half of it)

3 eggs, separated (plus the yolk leftover from making this) 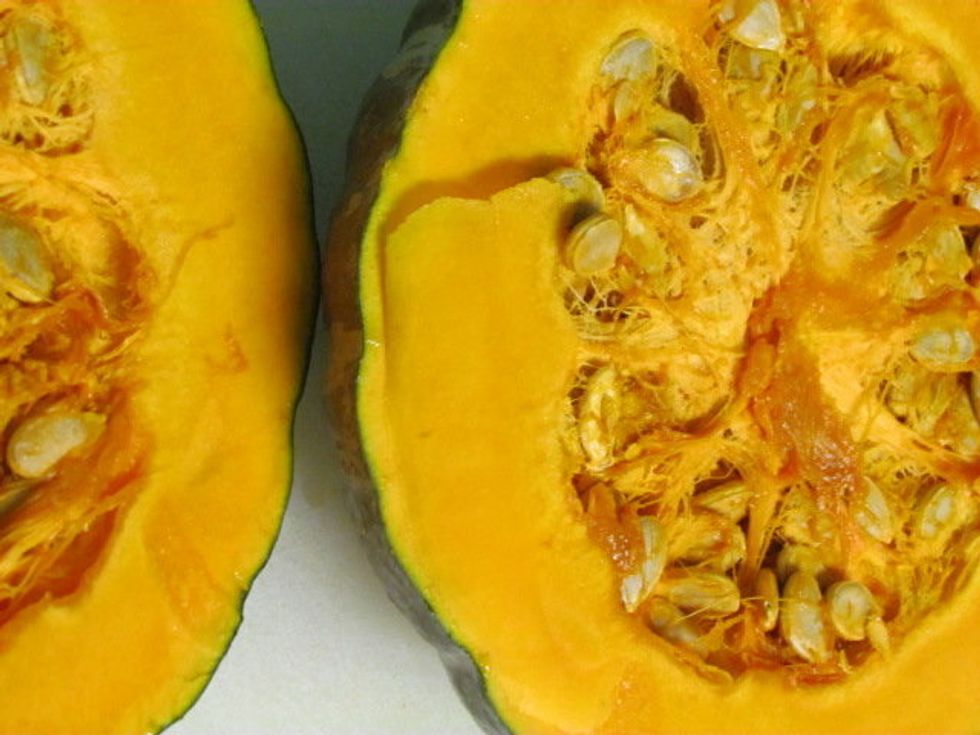 Set the oven to 400° F. Cut the squash in half, around its equator, and scoop out the seeds with a spoon.

Line a cookie sheet with tin foil, and put a little water on it. Place the squash halves, cut side down, on the cookie sheet, and bake until soft, about 30 minutes.

Carefully remove the skin from the squash, put the flesh in a large bowl, and mash it with your potato masher.

Let that cool (put the bowl outside, if it's cold where you live) while you get your pie dough into the pan.

The squash cool enough to handle? Great! Add to it the spices, sugar, milk, egg yolks, and half of the rum. Beat that until it is fully combined and smooth.

Drink the other shot of rum. (That's what they call a "tot" on the HMS Pinafore.)

Now, whip the egg whites until stiff but not dry. 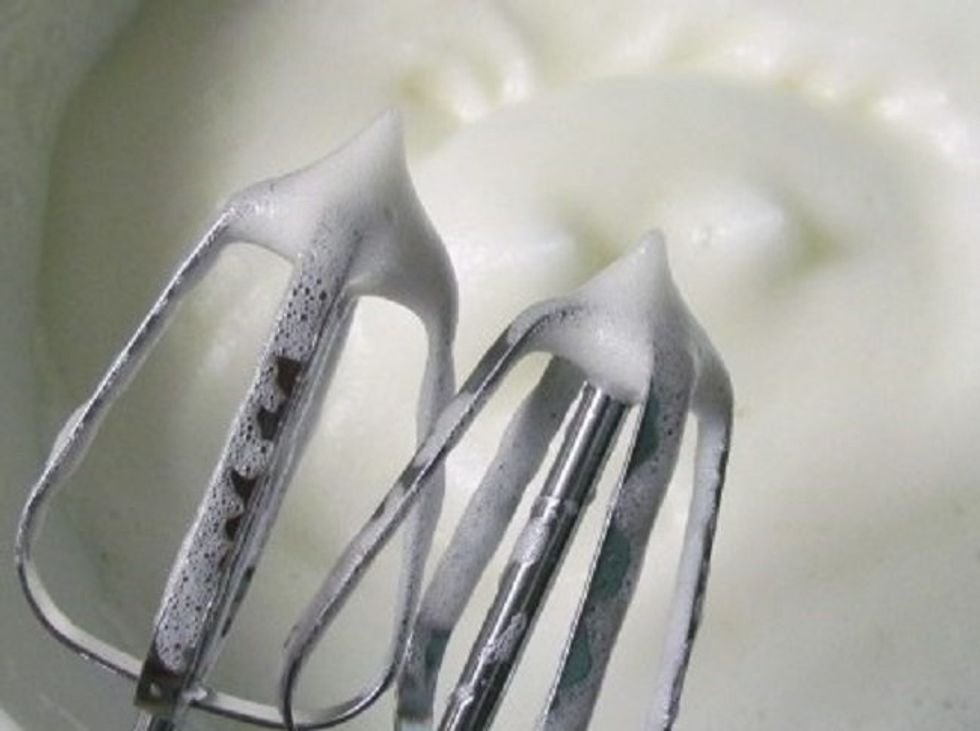 Fold the egg whites into the squash mixture. Do you know how to do that? Mix 1/3 of the whites into the squash stuff with a whisk. Add half of what's left of the egg whites (or another 1/3 of the original amount for you algebra enthusiasts) and run your rubber spatula or wooden spoon along the bottom of the bowl away from yourself, then kinda scoop it back toward you, "folding" the mixture over the whites. Turn the bowl a quarter turn and repeat. Do this until the egg whites are fully incorporated. Gently fold in the remaining egg whites until it's almost all the way incorporated, but a few small streaks of white remain.

Pour the filling into the prepared pie dough. This is going to be way more than you need for one 9-inch pie, so be creative with the rest or throw it away.

Put it in the oven for 10 minutes, then reduce the heat to 300° F. Bake for an additional hour or so, until a toothpick comes out clean and the crust is golden brown and delicious. 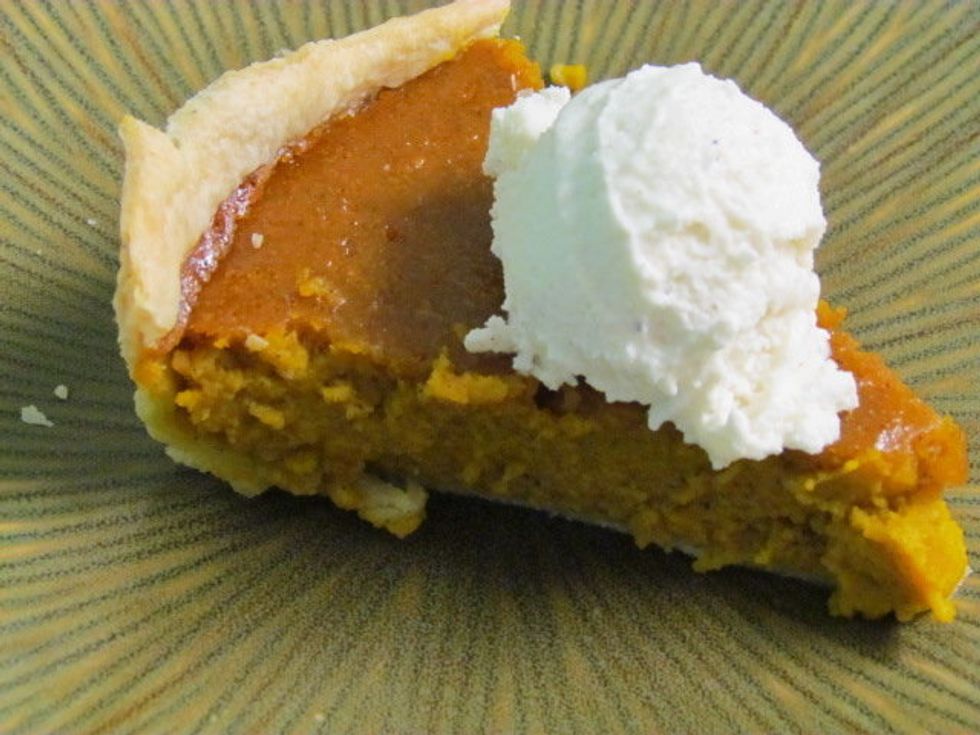 If your Thanksgiving host is any damn good at hosting Thanksgiving, there will be plenty of whipped cream available to dollop on slices. We're eating it with vanilla ice cream today for our health. We will wait until next week to begin drinking heavy cream by the quart.

Wonkette is entirely funded by YOU! Click below, to fund Wonkette for Thanksgiving!