Skip to content
Here's how Breitbart reports a new Axios poll about COVID and the Omicron variant:

Eighty-two percent of Democrats are willing to wear face coverings indoors at all times due to fears of contracting the omicron coronavirus variant, a Tuesday Axios-Ipsos poll revealed.

When respondents were asked if they support preemptive travel bans to slow the variant’s spread, 67 percent overall said they would support the measure (72 percent of Democrats and 66 percent of Republicans).

Breitbart's slant here is obvious: Those silly Democrats with their silly pandemic precautions! But give Breitbart credit: The numbers for Americans overall are right up front, in these opening paragraphs, and it's clear from those numbers that a significant majority of our fellow citizens want steps taken to prevent virus transmission.

Now, here's how Axios reports its own poll: 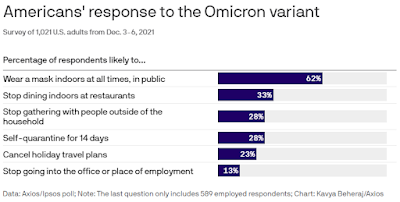 Most Americans aren't willing to make big changes in their behavior to minimize the risk from the Omicron variant, like avoiding indoor restaurant dining or cancelling their holiday travel plans, according to a new Axios-Ipsos poll.

The big picture: The poll found support for some broader public responses, including one — travel bans aimed at people from other countries — that was widely supported by people across the political spectrum. But it found that Americans are only willing to do so much on their own.

The poll shows "how much the behavior is already baked in" at this late stage of the COVID-19 pandemic, with Americans mainly interested in ways to adapt so they can keep living their lives, Ipsos senior vice president Chris Jackson said.

"New facts don't seem to be changing people. They've already decided what they're going to do, and they're doing it."

It's only after this that we learn that, well, actually, a lot of Americans want something done. And even then, the spin is Well, yes, most Americans want this, but Republicans don't, so the majority opinion doesn't really count, does it?

A majority of Americans are willing to wear masks indoors in public at all times in response to Omicron. But naturally, that hides huge partisan differences: 82% of Democrats are willing to do so, but just 38% of Republicans are.

...Larger numbers of Americans are open to broad public responses to Omicron, like businesses requiring customers to wear masks indoors (69%), travel bans to keep people from other countries from entering the U.S. (67%), and local governments requiring masks in all indoor public places (65%).

Hey, who cares if two thirds of Americans want a public health response. Republicans object! They have veto power over everything, don't they?

Even when we get facts from the mainstream media that contradict the media's preferred narratives, the narratives endure.