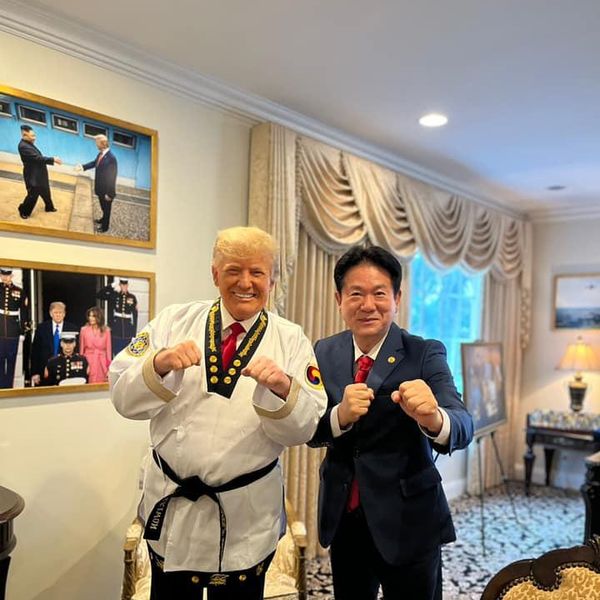 Look, this is just a thing that happened, and it is a Thanksgiving miracle:

What is your favorite part of those pictures, which were taken at Mar-a-Lago? Our favorite part is how whatever room they are in, right there on a wall that is clearly full of SEXTRA SPECIAL presidential moments in an extremely prominent place is Trump meeting Kim Jong-un. Because that was a real FUCKIN' highlight for him.

As for whether Trump deserves an Honorary Dan Certificate, AKA an honorary black belt, we'll leave that up to literally everyone else. But if you wanna read some comments, HOLYDAMN, click on that Facebook post. Like:

Slap in the face of those that have earned any degree and follow the tenets. Very disappointing. He is lacking in character. Courtesy, Integrity, Perseverance, Self-Control, and Indomitable Spirit.

so trump and putin get free 9th dan... are they just giving away to people with money? lol How about give these honors to taekwondo masters, gm and teachers who have actually shared tkd knowledge their entire lives.

Like we said, we feel comfortable leaving this one to other folks. And yes, what that person there is referring to is that Vladimir Putin, who also does not do taekwondo, has received the same honorary black belt as Trump. The New York Post notes, though, that Putin is a black belt in judo.

As you see in the Facebook post above, Trump reportedly said, "It is my honor to receive Honorary Dan Certificate and I think Taekwondo is magnificent martial art for self-defense. I wish to see Kukkiwon Taekwondo Team's demonstration." The New York Post adds more:

The former president reportedly added that he will wear the taekwondo outfit to Congress if he is elected president again and invited the Kukkiwon demonstration team to the United States to perform.

OK well we have literally nothing left to say about this so goodbye!