OMICRON! Fuckin' hell, man. The CDC knows where to get your booster, do it ASAP.

Republicans are celebrating by making up some weirdass lies about an influx of South Africans at the Mexican border. Because, South Africa is the country that had the technology to sequence it and LOLWUT?

Former Defense Secretary Mark Esper is suing the Defense Department over changes it wants him to make to his upcoming book "A Sacred Oath" about his tenure in the Trump administration. He alleges that the DOD is improperly classifying events which have already been made public in violation of his First Amendment rights (normal) and that the DOD leaked a story from his manuscript "possibly to undermine the impact it would have had were it to first appear in the published version of 'A Sacred Oath'" (not normal). (Docket via Court Listener)

The Ghislaine Maxwell trial starts today, if you have the stomach for that kind of thing. Let NPR tell you what to watch for, because, honey, could not be me.

Speaking of hideous and vile, the Supreme Court is set to hear oral argument on Wednesday in Dobbs v. Jackson Women's Health, which involves Mississippi's 15-week abortion ban. Get caught up on the case over at SCOTUSblog. TLDR, ugh ugh ugh.

And if you weren't pissed off enough, let Techdirt's Mike Masnick walk you through documents released from the House Oversight Committee on the unholy alliance between Big Pharma and management consultants like McKinsey to keep drugs as expensive as possible by abusing the patent system. Flames on the side of my face!

The Daily Beast's Will Sommers has a fun rundown on the wingnut slapfight taking place over on Telegram, where the "Stop the Steal" weirdos have turned on each other. Lin Wood whined that Jesus would git Sidney Powell for not defending him and posted audio of Michael Flynn saying QAnon is a CIA psy-op. Powell responded thusly, because, LOL, these people are in their seventh decade on Planet Earth and think they're all dank memelords. 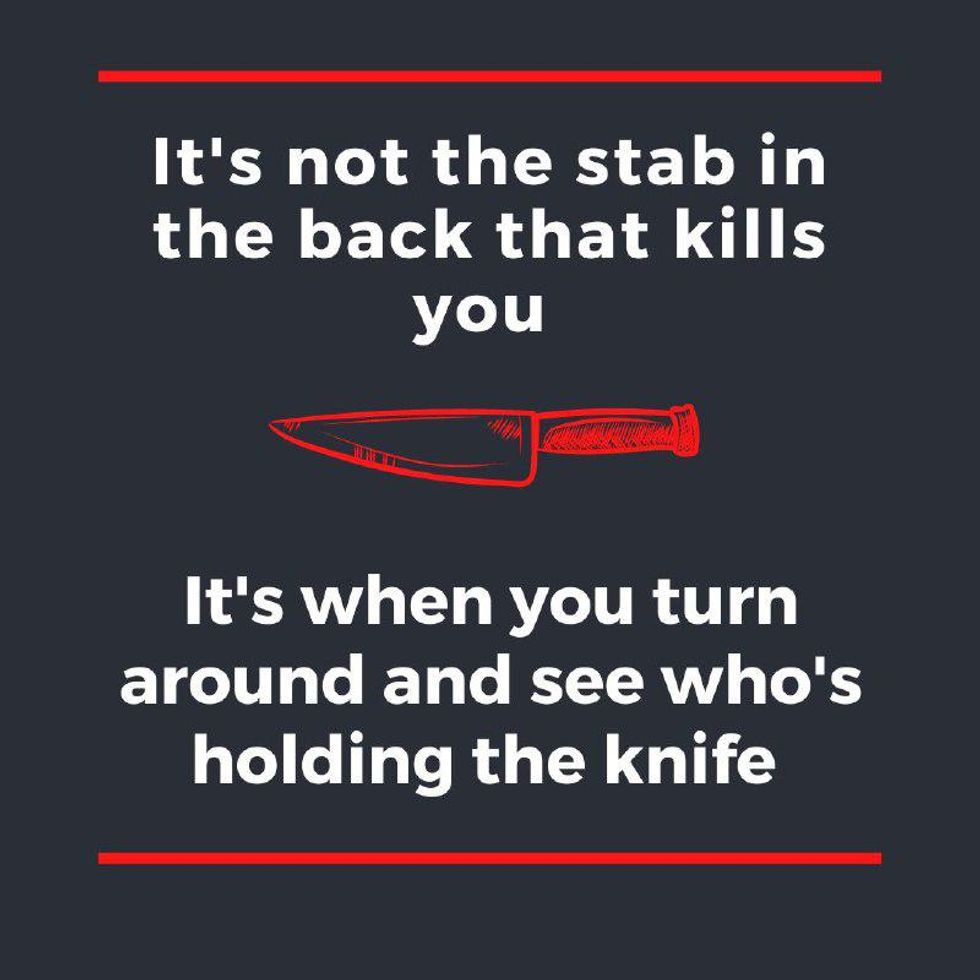 Also at the Daily Beast, Zachary Petrizzo and Lachlan Cartwright turned the gossip tables on the Politico Playbook team, which is bloody apt considering the Gossip Squad reports literally everything like it's an episode of Sweet Valley High on the Potomac. Apparently reporters Eugene Daniels and Tara Palmieri clash on the regular over how much social justice should go into the daily newsletter. What's more surprising is that Petrizzo is able to pump out content after spending the past three days watching the Pillow Fluffer's Thanksgiving election scream-a-thon. Love that guy!

The CIA put out a new chapter in its ongoing monograph chronicling presidential briefings. This one describes Donald Trump's consumption of intelligence products, and, hey, spoiler alert, he's an illiterate idiot. This chapter is called Donald J. Trump — A Unique Challenge. Yes, literally.

Pennsylvania's race to replace retiring Senator Pat Toomey is down one Republican, as Trump-endorsed candidate Sean Parnell dropped out this weekend. Turns out having your kids taken away because your wife says you abused her and them is bad, even if you're a Republican. Who knew! (Pittsburgh Post-Gazette)

And actor Matthew McConaughey says he's not running for governor of Texas after all. Alright alright alright.

Fashion designer Virgil Ablow, 41, passed away after battling a rare form of cancer. The Times has a detailed obituary of the pioneering Black artistic director of Louis Vuitton menswear and founder of the iconic brand "Off White." Here's the Instagram post from his family.

Former Florida Congresswoman Carrie Meek, the first African American to represent the state in Congress since Reconstruction, passed away Saturday at the age 95. From the Miami Herald: "The granddaughter of slaves, Meek served as Florida state representative, state senator and later became a congresswoman in 1992 at the age of 66. She won the nomination for the Democratic Party and ran unopposed in the general election, going on to win in one of three majority-Black districts in Florida that were reapportioned at the time."

And last night marked the beginning of Chanukah for the J Team. Put on your yarmulke like Adam Sandler — or don't, since it's not really one of our big holidays. I'm still using a latke technique from a 2007 issue of the short-lived Jewish Life Magazine. (Hey, Samantha Garelick!) TLDR, shred your potatoes in the food processor; put them in a bowl of water for a minute; put the regular blade back in the processor; grate the onions; put the potato shreds back in the processor and pulse so they're not long strings; squeeze the water out of the onions and potatoes with a towel or a potato ricer; and then pour off the water from the bowl and scoop out a tablespoon of starch for every couple pounds of potatoes. And here I was all those years buying potato starch like a chump!

Can't do anything about the canola facial, though.

Don't forget to hit up the WonkBazaar for all your holiday shopping needs.