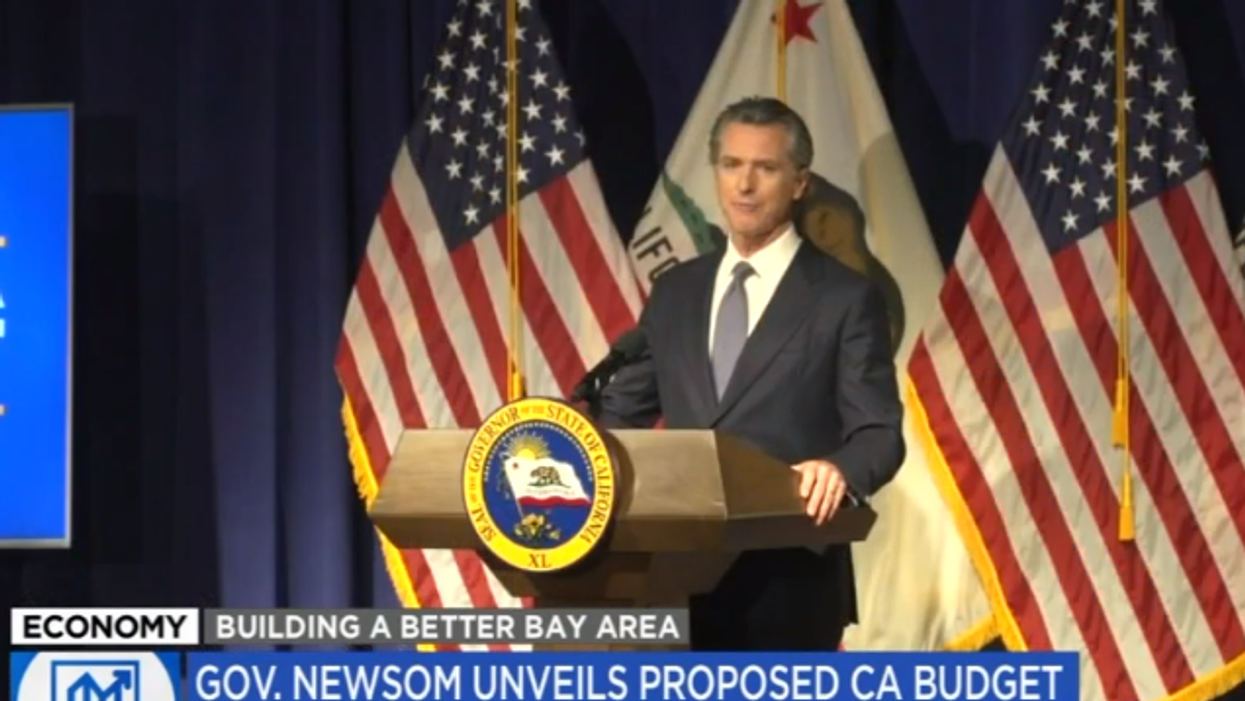 California, the state wingnuts love to hate, is projected to have a tax revenue surplus again this year, making it the ninth consecutive year the state has run a surplus. And Gov. Gavin Newsom has some plans for some of the anticipated $45.7 billion in surplus revenue, about half of which can be used at the state legislature's discretion. At his annual budget presentation yesterday — it ran nearly three hours, because that man loves numbers — Newsom said his top priorities for the budget would be to address issues in five key areas: "COVID-19, climate change, homelessness, inequality, and keeping our streets safe.”

The overall budget proposal is for $286.4 billion, of which some $10 billion would be new spending. The Los Angeles Times reports that

[i]n broad terms, Newsom’s proposal to the Legislature is consistent with budgets written in recent years. Although it would direct surplus tax revenue toward the state’s cash reserves and pay down some long-term debts, there would be plenty left over for programs championed by the Democratic governor and legislators from both major parties — such as enhanced security at clinics that provide abortions and cancellation of an increase in California’s gas tax that was scheduled for July.

“We have the capacity to invest in our growth engines, invest in the future, as well as making sure that we prepare for the uncertainties that the future presents,” Newsom said at a news conference Monday.

Heh, "growth engines." What a NERD!

While most of the budget measures would go into effect in July, after the state Assembly actually passes a full budget bill, Newsom asked the legislators to give him a head start on the budget this year by authorizing about half of his $2.7 billion request for spending on fighting the COVID pandemic, with infusions of cash for testing, vaccination, and healthcare staffing. He's also asking for an immediate renewal of a state requirement for employers to allow sick leave for workers and their families if they have COVID; the policy had expired in the fall of last year before the Omicron variant showed up.

Also too, Newsom wants to build on previous programs aimed at addressing homelessness. Last year, California authorized $12 billion in spending on homelessness assistance, including building more long-term housing. This year, Newsom wants to add $2 billion, over two years, as interim funding to help people get out of encampments and into short-term shelter and accessing mental health help. Newsom said that so far, last year's new programs have helped get 58,000 people off the streets, but added there's still — clearly — a lot more that needs to be done.

Big surprise: Republican lawmakers want a special session on homelessness this election year, and they want more careful accounting of where the housing aid is going, especially if it can be spun as helping bad undeserving people who make for compelling outrage on Fox News.

The LA Times also reports that

[a]nother $2 billion in the governor’s budget would be used to tackle California’s broader housing needs, providing housing grants and tax credits to spark the development of more places to live in downtown areas across the state. The outline he presented to lawmakers Monday says the effort would promote “a comprehensive and integrated climate and housing planning framework.”

When we fail to build enough housing, we make our climate change problem worse.

Gov. Newsom's new approach calls the question. Are we serious about climate change?

If so: We need to be serious about building MILLIONS more units in/near downtowns across CA.

A special Wonkette hat-tip to Elliott for very clearly avoiding "begs the question" even if that's the general usage now.

Newsom asks the legislature for $3.9 billion that would go toward zero-emissions vehicle infrastructure over the next three years, which combined with spending from last year makes for a $10 billion EV investment over the coming six years. The spending will go to EV charging stations, expanded state rebates on EV purchases (over and above federal EV tax credits), and a total of $3.5 billion for zero-emissions school and transit buses, plus heavy trucks used to move shipping containers to and from seaports, which are notoriously bad for air pollution.

Bunch of good stuff here! The LA Times notes that school funding will come to $119 billion in the coming year, which is nearly equal to the whole damn state budget for 2011-2012. Annual per-student funding in public schools will increase to "$20,855, with more dollars from the state’s general fund than ever before."

Higher education would also see a budget boost, with more than $600 million in new money for the Cal State and University of California systems, over current spending levels. Both state university systems

are expected to increase the number of in-state students, and the budget would add more money for scholarships aimed at students from middle-class families.

The budget proposal does not specifically address how much of the new funding will go to teaching godless communism, indoctrinating students in "critical race theory," and forced drum circles. Probably all of it and more, plus private grants for finding all students a new same-sex, trans, and/or atheist sweetheart to bring home for Thanksgiving 2023.

Oh, and this is nice! There'll be expanded funding for an additional 36,000 slots in pre-kindergarten classes as well, for a total of 145,000 kids getting state-funded childcare. And thanks to a new union agreement last year, better pay for childcare providers.

If you follow the Murdoch press, you may well think there's just one thing in Newsom's budget proposal, and that's his call to expand the state's Medicaid alternative, Medi-Cal, to cover all Californians who qualify based on income, regardless of immigration status. Under current law, Medi-Cal already covers financially qualifying non-citizens up to 26, and those aged 50 and older, so rightwing media that already had a freakout over it the first time around can sputter and fume about how horrible it is that undocumented people in the middle of those age ranges won't have to die of treatable illnesses, the way American Jesus wants.

More help for needy California families, too! Whatever the fate of the federal Build Back Better Act and its expanded child tax credit, low-income families in California will continue getting the state's Young Child Tax Credit, for lower-income families with kids under six. And starting with the 2022 tax year, the credit will be indexed to inflation every year, to help people keep up.

Also too, about that budget surplus, Politico points out that the huge surplus might "trigger the Gann limit, a voter-passed mechanism that compels California to reroute excess funds to schools and taxpayers," and also to plucky young girls named Natty during the Great Depression.

Newsom said he expects there are likely to be “substantial contributions back to the taxpayers,” but didn't say whether those would come in the form of rebate checks, or perhaps by giving everyone a wolf-dog hybrid that becomes their friend and protector on the harsh roads of the great American West.

Yr Wonkette is funded entirely by reader donations. If you can, please give $5 or $10 a month to help us keep this mommyblog chugging along until we can become an actual line item in Gavin Newsom's budget, we bet nobody would even notice.