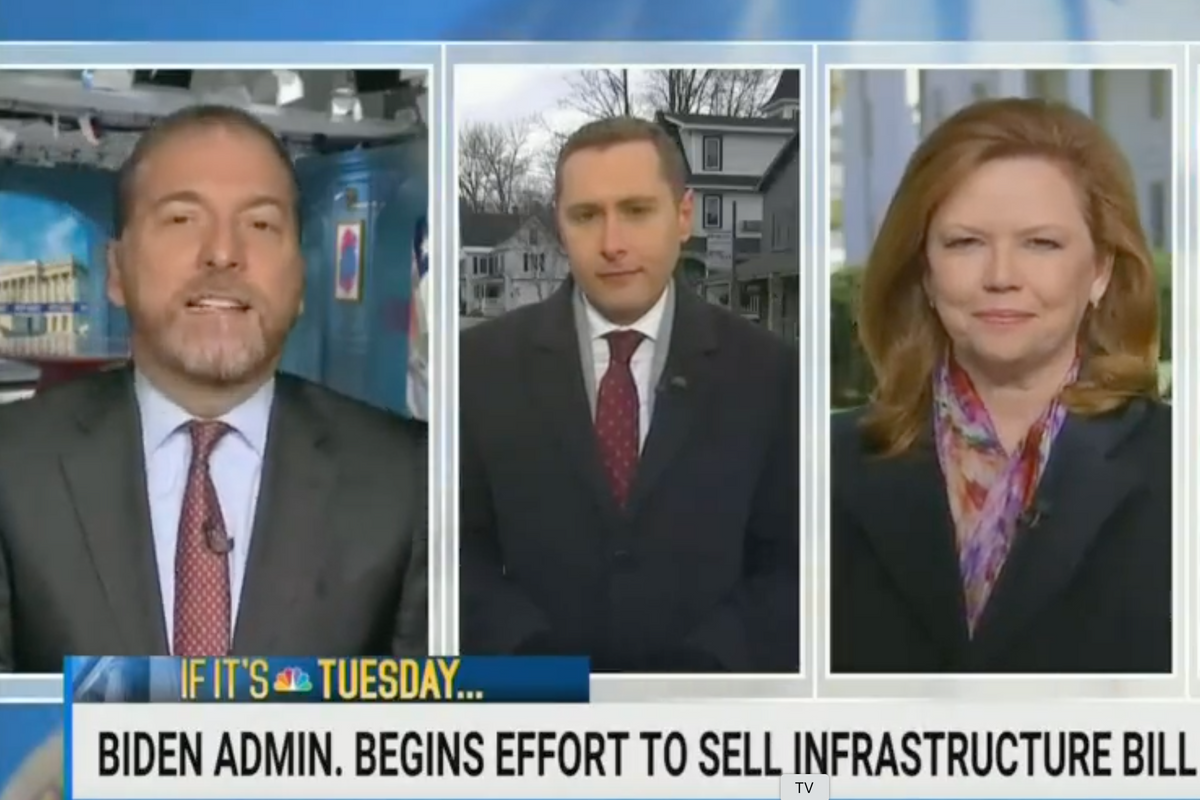 The Bipartisan Infrastructure Framework (or BIF) that President Joe Biden signed into law Monday will do a lot of great things for the country, but Chuck Todd thinks it's too little too late. Yesterday, the "Meet the Press" host explained why the White House bill signing ceremony was like the sad final days of Miss Havisham from Great Expectations.

Chuck Todd frames the signing of the historic infrastructure bill as bad for Democrats, "That event might have been impactful in August or September or October. It feels more like an epilogue to the ending of what's going to -- might not be a good story for Democrats in 2022. "pic.twitter.com/EYxN3iLsKu

TODD: Look, yesterday that event ... I'll be honest, it felt like — it just felt like an event out of time. That event might have been impactful in August or September, or October. It feels more like an epilogue to the ending of what's going to — might not be a good story for Democrats in 2022.

Yes, the guy who infamously claimed Hillary Clinton was “overprepared" for a presidential debate now insists that passage of a historic infrastructure bill marks the beginning of the end for Biden and the Democrats. He declares this without any facts to back up his dire prediction. It's unclear why releasing BIF during the late summer or early fall would've changed anything. This is an infrastructure bill, not a movie that foolishly shared its opening weekend with Avengers Endgame.

It's true that the fundamentals point to Democratic losses in the midterms. Republicans have already gerrymandered themselves a House majority before a single vote's been cast. However, that doesn't mean we shouldn't celebrate a bill that will positively impact American lives, even if those same voters don't appreciate it and hand control of the nation to the book-burning party.

Todd is from the Mark Halperin school of game theory politics. All that matters is how policies and legislation “sell." It's cynical and amoral, and if it's Sunday, that's what you'll get on "Meet the Press."

Only the worst hacks believe the sole purpose of achieving political power is to hold onto it indefinitely. The Beltway media can't comprehend politicians who might just want to make a difference in the world and do some good. Todd is the Eeyore who'd turn up at your wedding and wonder why you're celebrating when there's a 50 percent chance your marriage will end in divorce court. And even if you beat those odds, you're still mortal and you'll both slowly wither and die so why bother feeling anything?

BIF is expected to create almost one million new jobs over the next decade, but Todd dismisses its impact because a few dozen Democrats might lose their jobs next year. The 2010 Tea Party shellacking was also not a “good story" for Democrats, but they passed the Affordable Care Act, which literally saved people's lives. Democrats should do all the good they can, for all the people they can, in all the ways they can, as long as they can. Don't listen to the defeatists who keep on saying "Go slow!"

Todd isn't a passive observer. He's theoretically a journalist who helps craft the political narrative. If people only see stories about how the Democratic-controlled government is failing them and whatever Biden achieves doesn't matter, they will react accordingly at the ballot box. It's a self-fulfilling prophecy. Inflation and stagnant wages are very real issues. The media didn't make that up, but they could also talk about what's actually in BIF and Build Back Better. Dok Zoom can't do it alone.

Tara Palmeri at Politico shared Todd's dreary outlook when she noted that there was no apparent "BIF bump for Biden." He just signed the damn thing. Normal people can't register the “win." Palmeri pointed out that 63 percent of respondents in a Washington Post Poll said "Biden has accomplished 'not very much' or 'little or nothing' so far in his presidency." Democrats passed major COVID-19 relief in March, barely months into his presidency.

We can debate if we're better off now than we were four years ago, but there's no question that the country's in far better shape than it was exactly a year ago. While Democrats should shoulder some blame for less than ideal messaging, mainstream media has helped promote the GOP's doom-and-gloom narrative, and Chuck Todd is perhaps the worst offender.