On Saturday evening, about 100 members of the white supremacist group Patriot Front poured out of their traditional U-Hauls, wearing their traditional khakis and gaiters, and marched from the Lincoln Memorial to the Arlington bridge, waving American flags and chanting "Reclaim America."

A beautiful night at the Lincoln Memorial interrupted by demonstrators chanting \u201creclaim America.\u201c The crowd gave them the finger and exchanged profanities.pic.twitter.com/Z2voculi9Z
— Andrea McCarren (@Andrea McCarren) 1638654424

This is not the first time they've done this. Earlier this year they tried to do the same thing in Philadelphia, where they were very much not welcomed with open arms by the good citizens of the City of Brotherly Love.

Patriot Front is a well-established group — perhaps one of the most active of these groups in the nation at the moment. We know who they are. We know they started out as Vanguard America and then rebranded after Charlottesville, where James Alex Fields Jr. murdered activist Heather Heyer with his car. As ProPublica and several other sources explain, he wasn't a confirmed member of the group, but he sure was photographed carrying their shield and wearing their uniform. We know they've "provided security" for neo-Nazi Richard Spencer. We know they are led by 23-year-old Thomas Rousseau. 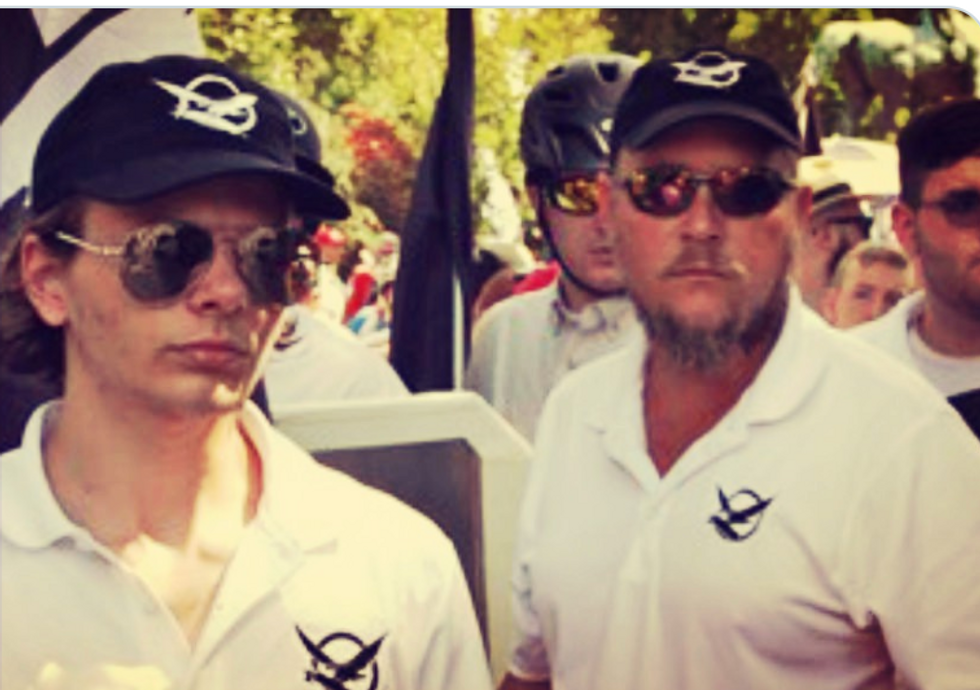 Here he is after his arrest last year: 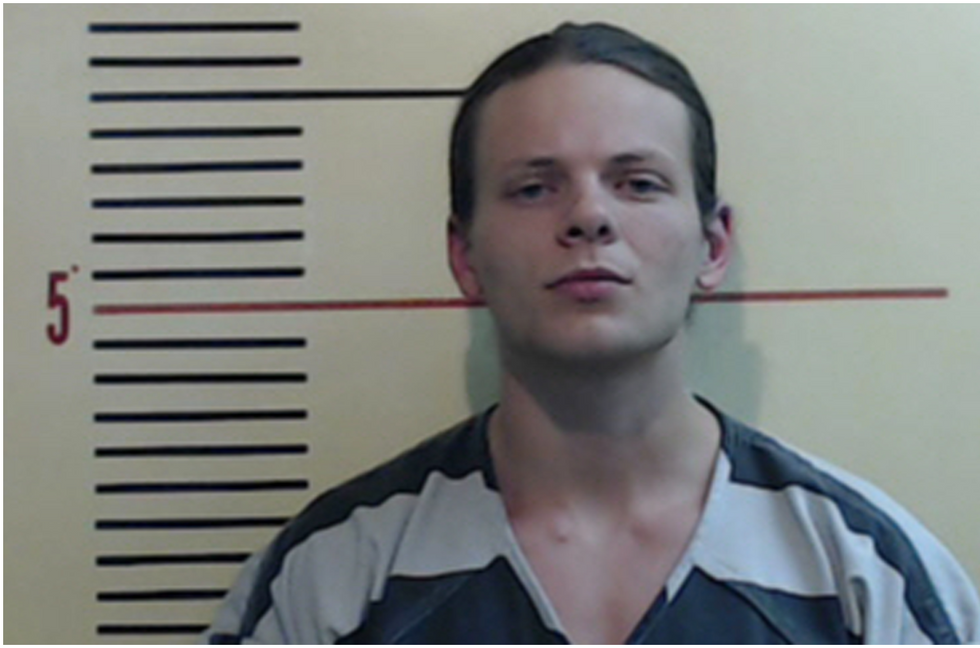 And here he is at the rally this weekend, wearing a cowboy hat and talking about how they want "an America that more closely resembles the interests of its true people."

There are absolutely zero questions about who these people are and what they are about.

Alas, several prominent conservatives have been claiming on Twitter this weekend that the whole darn episode was just a false flag perpetrated either by "antifa" or the FBI itself, to make the right look bad.

I'm in alot of Political circles and I've NEVER heard of this "Patriot Front" event, wanna know why? Because this isn't our event, this is a FBI, Antifa orchestrated red flag event to create a distraction. Be vigilant, stay focused
— McKayla J (@McKayla J) 1638668507

Dinesh D'Souza found it suspect that no one was giving Rousseau and his group free airtime and publicity.

Marjorie Taylor Greene knew for sure it was fake because who has ever heard of a "patriot group" "cover[ing[ their faces like they're scared." Except, you know, for a very famous "patriot group" with a remarkably similar ethos to this "patriot group," called the KKK.

Jim Thompson at RedState wrote a whole entire article titled "Feds in Khaki Pants March In DC" about how this was clearly all set up by the feds and no one even knows what Patriot Front is, except for all the people who know exactly who and what they are. He acknowledged that some of them may be actual members of this group, but still insisted that "at least 20 percent of them were Feds," because how else would they all afford those khaki pants?

He even did a little cartoon. 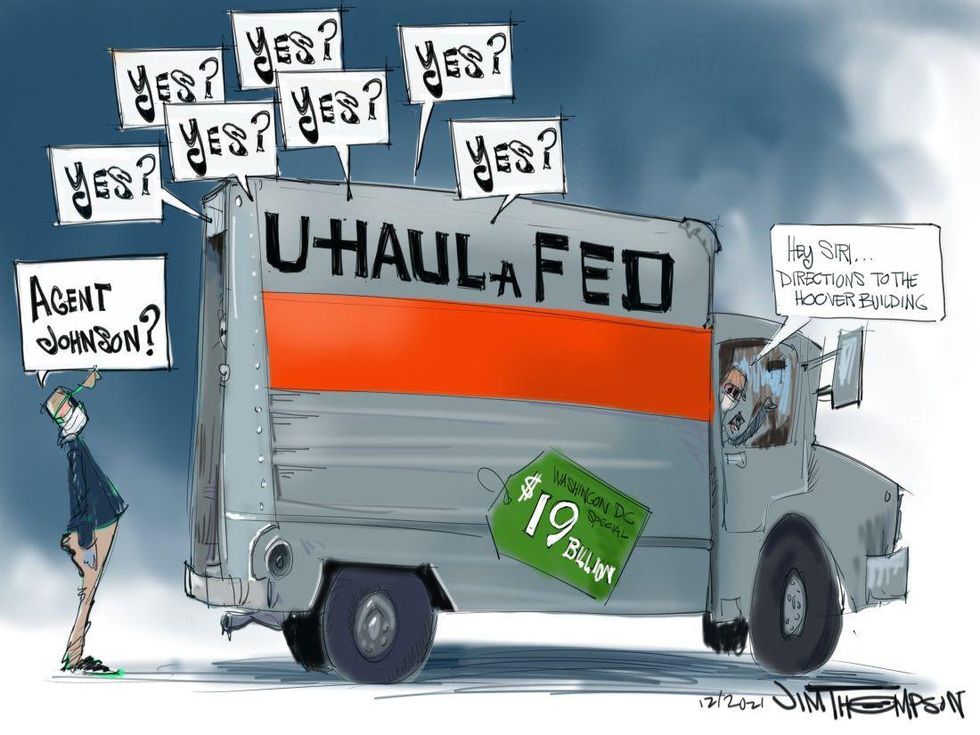 Fun fact: Thomas Rousseau, the leader of Patriot Front, actually got his start doing cartoons at his school newspaper. So they have that in common.

Several randos speculated that perhaps it was the Lincoln Project pulling some more extremely unhelpful bullshit, but again, we know who these people are. Also are there even 100 members of the Lincoln Project? Isn't it just like five guys who are biding their time with Democrats until Republicans become classy again?

And, of course, there were those who went old school and claimed George Soros was behind it all.

Ironically, the only "false flag" type event in this whole thing was perpetrated by Patriot Front themselves. They set up a fake Twitter profile with an AI-generated photo of a person who does not exist to post video of their march, claiming there were over 500 of them (which there very clearly were not). People who are better at this kind of thing than I am quickly identified the photo as a fake, after which the account was swiftly turned into a pro-Patriot Front Twitter account.

I will say that these conspiracists come in two categories: those who know they're full of shit and those who don't. The fact is, conservatives have claimed for years now that anything they think makes them look bad — school shootings, Nazi rallies, and even, ironically, conspiracies like QAnon — is a false flag. Similarly, they have been claiming for years that left-wing protests are filled with George Soros's legions of "paid protesters."

It is, unfortunately, a fairly smart tactic for those who subscribe to an ideologies that attract the most repulsive human beings on earth and also, in the case of gun nuts, repeatedly leads to children getting murdered at school. It's part of the whole "it wasn't me" ethos that allows the American Right to avoid culpability in pretty much any given situation.

It Wasn't Me www.youtube.com

This way, they don't have to openly criticize groups like Patriot Front and alienate those who agree with them, while maintaining a level of plausible deniability to those who might be repulsed by such a display but are not constantly paying attention to politics and current enough to know that it's bullshit.

Luckily for us, the right's habit of insisting that every time they get toilet paper stuck on the bottom of their shoe it was actually a George Soros-planted lookalike is pretty easy to ridicule, and we should do it more often, to the point where it is no longer a useful tactic for them.