Skip to content
Gateway Pundit publishes some of the worst anti-science propaganda anywhere on the Internet. If you're looking for reasons not to get vaccinated, GP is a one-stop shop: 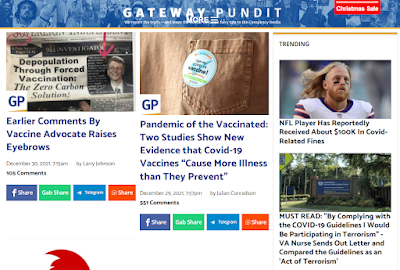 So I was surprised to see that GP's Jim Hoft posted this yesterday:

But ... but ... I thought there was no such thing as a promising COVID vaccine!

Novavax is proving more effective than Moderna, J&J, or Pfizer with less reliance on aborted cells and no gene therapy....

Novavax was not developed using body parts of aborted babies. (Though, like all other vaccines currently available, Novavax is tainted with tests that involve fetal cells.) Plus, it’s 90 percent effective against all strains of SARS-COV-2 including omicron and delta. Further, it’s an actual vaccine that uses a weakened form of the virus, so it’s likely much safer than the genetic mutation serums from Moderna, Pfizer, and Astra-Zeneca. And, unlike all other available serums, Novavax reduces viral replication, reducing the spread of the virus.

There's alarmist nonsense here about the existing vaccines ("genetic mutation serums"), and the usual downplaying of those vaccines' safety and efficacy. But the message about "aborted babies" really might resonate with some vaccine refusers. Some refusers believe that the vaccines themselves contain parts from aborted fetuses (they don't, although cells cultured from decades-old fetuses are used in vaccine development, a fact that hasn't prevented the Vatican from endorsing vaccines in general and COVID vaccines in particular). If the use of fetal cells alone is preventing some refusers from getting vaccinated, and if influencers in the right-wing media ecosystem are saying that the Novavax vaccine is morally acceptable to this subset of objectors, then maybe some of them will get vaxxed in 2022. I'm all for that.

I'm skeptical of the claims made for Novavax's superior efficacy -- but if Novavax is safe and effective, and if the right-wing press uses its propaganda skills to praise the Novavax vaccine as vigorously as it slanders the other vaccines, then maybe we'll finally have what we've sometimes joked that we need: a vaccine right-wingers will take because it's "their" vaccine and not "our" vaccine.

The Novavax vaccine has just been approved for use by the European Union and India. In America, however, Novavax won't apply for authorization until sometime next year, reportedly because it's had manufacturing difficulties.

I'm ready for it. If it's a good vaccine and they think they're owning the libs or honoring God by going with Novavax, then bring on the jabs.