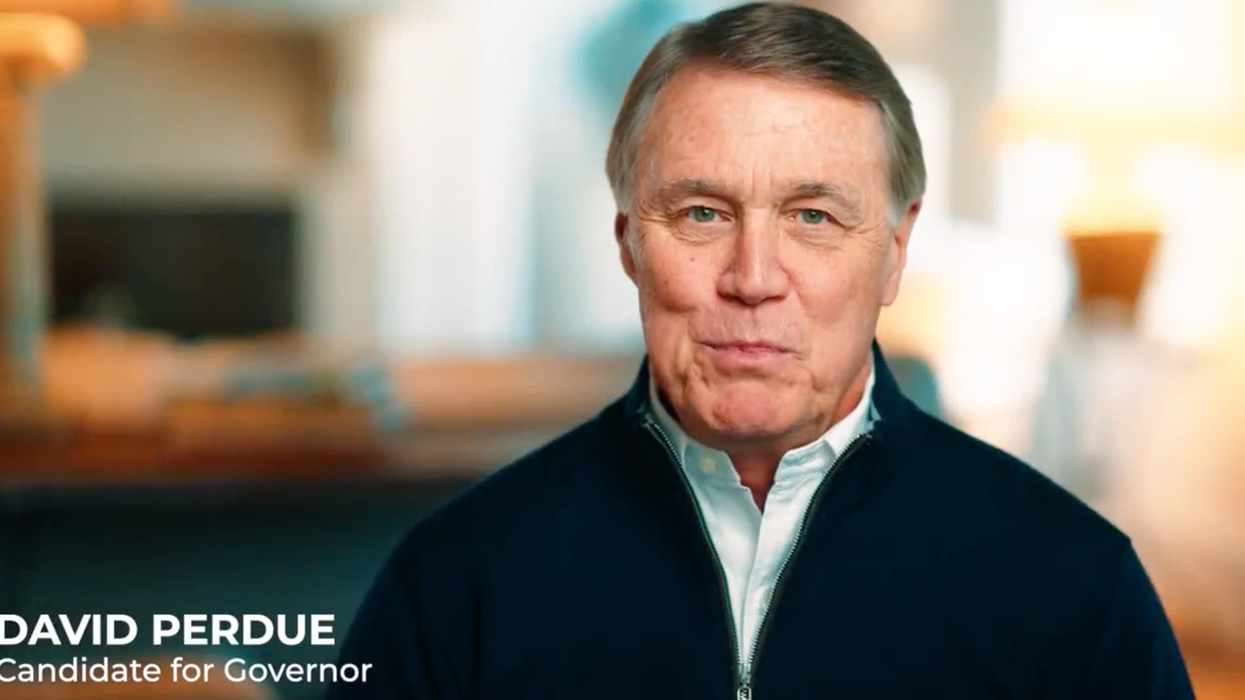 Former Senator David Perdue launched his campaign for Georgia governor Monday, and he officially has nothing to offer but racism, cultural resentment, and Donald Trump’s Big Lie.

Here’s his announcement video, which we don’t advise watching without an airsick bag handy.

PERDUE: I’m running for Governor to make sure Stacey Abrams is NEVER Governor of Georgia.

Yes, that’s his sole platform — keeping the Black woman out of the governor’s mansion. It’s not as if almost 30,000 Georgians have died during the COVID-19 pandemic or anything. This reminds me of when Josh Lyman on the "West Wing" quit a presidential campaign because he realized the candidate didn’t actually stand for anything but winning and being strongly opposed to somebody else winning. That’s it.

Stacey Abrams launched her second campaign for governor with an inclusive, uplifting message. She specifically discussed how she’d help all Georgians and move the state forward. Perdue is acting as if she delivered a variation of Khrushchev’s “we will bury you” speech.

PERDUE: Make no mistake, Abrams will smile, lie, and cheat to transform Georgia into her radical vision of a state that would look more like California or New York.

California and New York are American states where almost 60 million citizens live. Republicans regularly attack states they don’t consider “real America,” but that doesn’t make them patriots. It makes them neo-Confederates. California and New York have the nation’s first and third largest economies, so it’s not the worst thing in the world for Georgia to become more like either. Perdue has also made a great deal of money trading stocks in that un-American hell hole, New York.

Perdue, who supports Donald Trump, accuses Abrams of lying and cheating. This isn’t just a grossly negative personal attack. It’s intended to counter the obvious reality that Abrams is a decent human being. Abrams is charming and personable, while Perdue looks like he’s giving a deposition while constipated. The Republican strategy against Abrams is similar to their oldie, but good and racist one against Barack Obama: Voters might think they like Abrams but that’s only because she’s lying to them. Secretly, she’s plotting their demise while cackling maniacally.

Perdue explains that in order to “fight back” against Abrams, whose big offense is running for office, Republicans must be united, which is why he’s challenging the incumbent Republican governor, Brian Kemp.

PERDUE: Unfortunately, today, we are divided, and Brian Kemp and Brad Raffensperger are to blame.

Uh, no, Republicans are “divided” because Trump and his cronies, including Perdue and fellow former Senator Kelly Loeffler, openly attacked Kemp and Raffensperger because they wouldn’t help Trump steal the election. Like someone in a gangster movie, Perdue says, "Look, I like Brian, this isn’t personal. It’s simple. He has failed all of us and cannot win in November.”

This obvious implication is that Kemp “failed” Georgia when he certified President Joe Biden’s victory in the state and didn’t violate numerous laws on Trump’s behalf.

PERDUE: Instead of protecting our elections, he caved to Abrams and cost us two Senate seats, the Senate majority, and gave Joe Biden free rein.

This is a supervillain’s distorted recollection of past battles. Kemp didn’t “cave” to Abrams because Abrams had nothing to do with what happened after the ballots were cast and Biden won. Trump had lied, back when he had a Twitter account, that Kemp and Raffensperger had approved a consent decree, at Abrams’s urging, that "makes it impossible to check & match signatures on ballots and envelopes, etc. They knew they were going to cheat. Must expose real signatures!” In reality, the consent decree doesn't prevent Georgia election clerks from scrutinizing signatures.

Trump has specifically demonized Abrams as the mastermind behind his loss in Georgia, and Perdue is helping Trump promote his “stab in the back” narrative regarding Kemp and Raffensperger. They’re both Republicans, just like Elections Manager Gabriel Sterling, so they must not have fought hard enough against Abrams or just folded before her fearsome Blackness.

It’s pathetic for Perdue to blame Kemp for his own election defeat in January. Perdue and Loeffler lost those Senate seats all by themselves. They chose to kiss up to Trump, who reportedly was glad they lost because he didn’t think they were loyal enough. He’s a sick bastard.

PERDUE: Think of how different things would be today if Kemp had fought Abrams first instead of fighting Trump.

Perdue isn’t solely focused on Trump’s personal vendetta. He has some plans of his own, such as eliminating the state income tax and fighting the “woke Left.” He would put “parents in control” of schools, not the “woke Left” who are apparently no one specifically but everyone Republicans don’t like. He’d also continue fighting public health measures and wouldn’t cave to the “liberals in the cities,” which is where Georgia citizens live.

Finally, after slandering Abrams, Kemp, and Raffensperger, Kemp asked for voters’ support and their prayers, but he shouldn’t count on any divine endorsements. He sold what remained of his soul to Trump.