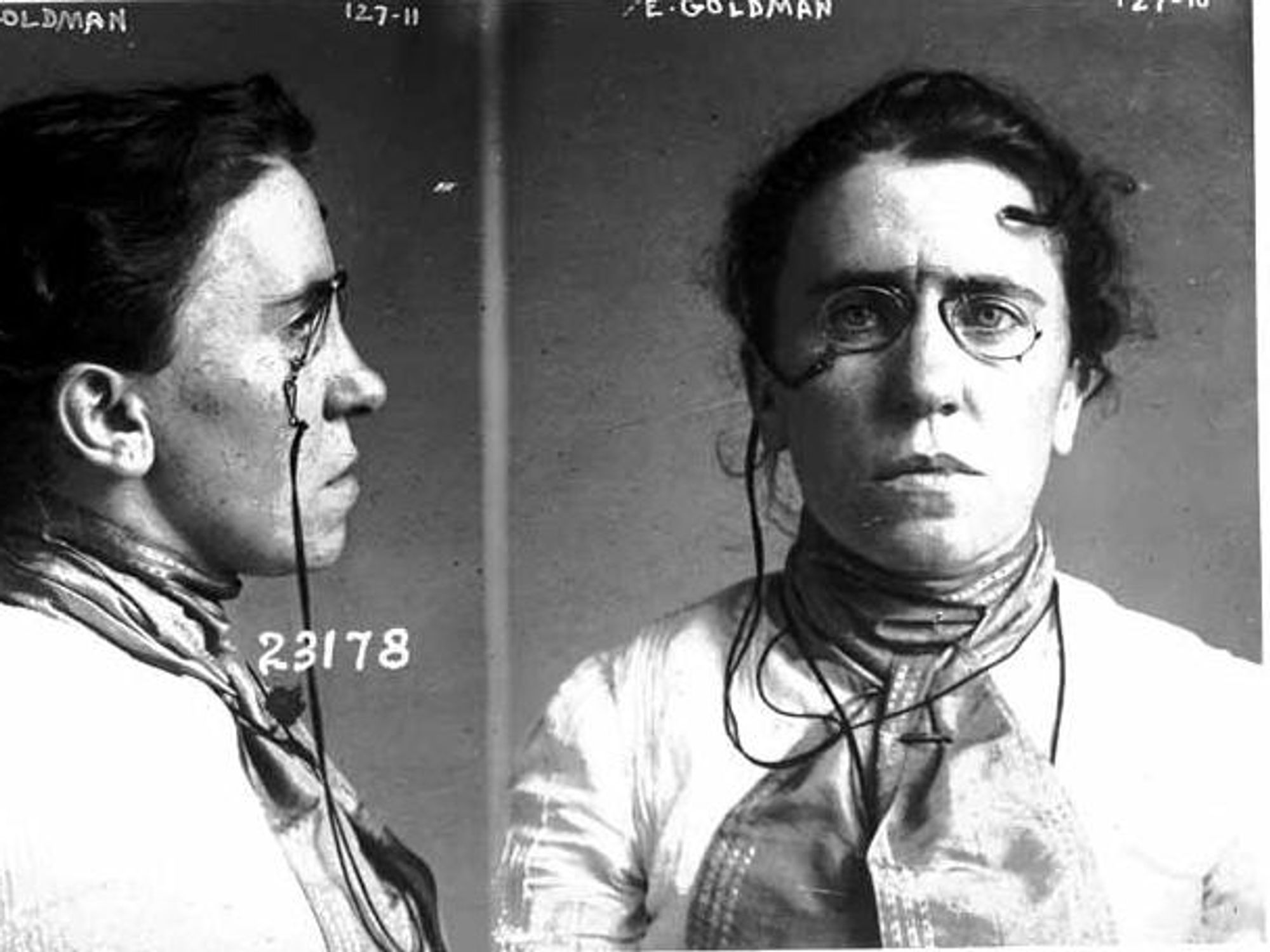 On December 21, 1919, the anarchist Emma Goldman was deported from the United States to the Soviet Union as part of the larger crackdown against radicals under the Alien Act and other World War I laws that suppressed dissent. This shameful moment in American history is both an excellent time to examine Goldman’s life and to remember the historical suppression of free speech during a period where attacks on the free speech of leftists are rising again.

Born in 1869 in what is today Lithuania, Goldman immigrated to the United States in 1885, at the age of 16. Already exposed to radical thoughts in Russia, she threw herself into politics when she entered the United States, especially after the Haymarket Riot and repression of anarchists that followed. She met her lover and fellow anarchist Alexander Berkman. They moved to Worcester, Massachusetts, and ran an ice cream shop. Goldman came to public attention for the first time in 1892, when she helped Berkman plan the assassination of coal executive Henry Clay Frick after the plutocrat busted the Homestead Strike. The failure of Berkman to kill the unarmed Frick may tell us why we can’t trust anarchists to ever accomplish anything. But it also made Goldman famous. Police raided her apartment but did not find any evidence and she was not prosecuted for her involvement.

She built upon her fame from Homestead over the next nearly three decades, fighting for an array of social justice causes, especially women’s rights and women’s control over their own bodies. She was first prosecuted for inciting a riot in 1894, organizing people for economic justice in the aftermath of the Panic of 1893. She was found guilty and sentenced to a year in prison. After serving 10 months, she was released to thousands of adoring followers at a post-release event in New York. She then went to Europe to study midwifery and meet with leading international anarchists. In 1901, Leon Czolgosz claimed he killed William McKinley in her name, an act from which she distanced herself but did not denounce, causing a rift between her and fellow anarchists who were revolted by the assassin. She disappeared from public action for a couple of years before returning. In 1906, she and others started the radical journal Mother Earth, which Berkman edited after his release from prison in 1907. For the next decade, she traveled the nation giving radical lectures about both anarchism and birth control. In doing so, she drank fairly heavily (I saw a paper at a conference once which quoted her talking about much she liked California because the wine was “cheap and strong”), fell in love with Ben Reitman, who followed her on her speaking tours and openly cheated on her the entire time, and became a strong supporter of Margaret Sanger after the latter faced legal problems for her birth control advocacy. Goldman herself was arrested for violating the vile Comstock Laws as late as 1916, preferring to work at hard labor rather than pay the fine.

Through these travels and experiences, Goldman developed a sophisticated ideology. Although an anarchist, she was close enough to the experiences of lived people to understand much about them. When challenged by an elderly worker about her talk of revolution and dismissal of incremental change because it was all he had to hold onto, she rethought her positions and accepted shorter hours and higher wages as steps toward a broader revolution that helped people in the present and laid a path for the future. Yet like most anarchists, she did not believe the state had any role to play in making a better future. The state was inherently a coercive force that needed to be destroyed, not seen as a tool that would ever help workers. But to be fair, Samuel Gompers basically believed the same thing, except that of course he completely rejected the anarchist solution to this problem. And given the open warfare the Republican Party has launched against workers’ organizations, it’s a position perhaps worth revisiting.

When the United States entered World War I, Goldman, like most radicals, was revolted, believing it a capitalist war to divide the world’s profits. In this, they were not exactly wrong. They began acting to resist the draft and the war. The Wilson administration, although the most sympathetic presidential administration to organized labor to date, had no tuck for radicalism. It pressed through Congress a raft of new anti-radical laws. The most famous is the Espionage Act. This is what led to the arrest and imprisonment of Eugene Debs for organizing draft resistance. Goldman was arrested under the Espionage Act on June 15, 1917. She was sentenced to two years in prison, during which she worked as a seamstress and met many other leftist activists sentenced to prison for the same crime. She was released in September 1919. But a very nice young man named J. Edgar Hoover was cutting his teeth in prosecuting radicals. While she was in prison, Congress passed and Wilson signed the Alien Act, which provided for the deportation of any immigrant who identified as an anarchist. Hoover had Goldman immediately rearrested under this law, writing of her and Berkman that they “are, beyond doubt, two of the most dangerous anarchists in this country and return to the community will result in undue harm.”

Goldman was an American citizen and thus stated that she did not qualify under this law. But for Hoover, Attorney General A. Mitchell Palmer, and other anti-radicals, this did not matter. They were determined to cleanse the nation of scary people who talked about class conflict. She refused to fight what was a lost cause.

Goldman and 248 radical immigrants were deported on December 21, 1919, and sent to the Soviet Union. Goldman was initially optimistic about finding a better society there. But like many foreign radicals, she soon became disillusioned over the lack of free speech in the revolutionary state. She supported the Kronstadt Rebellion in 1921, and when the Soviet government cracked down, Goldman and Berkman, no longer a couple but still close friends, decided to leave. They first went to Riga and then lived in Berlin for a few years. They were not accepted in Berlin because time had passed them by. With leftists turning to communism as the hope for the future, Goldman’s anti-Soviet message was rejected by fellow leftists, while the city’s liberals hated them for being too radical. She left Berkman in Berlin and traveled to London. A local radical married her to stabilize her life and allow her to have a British passport to avoid deportation. Based on this, she traveled to Paris and then settled in Toronto, where she died in 1940.

Goldman’s story is fascinating for so many reasons. She was a complicated, multi-faceted woman who lived her life in the public eye, often taking positions seen as anathema by respectable society. She pushed the boundaries in terms of both class-based politics and gender politics. She talked about sex openly at a time when respectable people did not do this. It’s also true that for all her fame, she was a bit disconnected with the lived struggles of workers. After all, there were lots of specific incidents of rebellion happening during her life and unlike Mother Jones or Elizabeth Gurley Jones, she wasn’t really involved directly in any of them.

That said, Goldman serves an inspiration for so many people today. The government repression of her — even after she became a citizen — is far too reminiscent of how Republicans talk about radicals and leftists today. The freakout over Critical Race Theory and the desire to ban real talk about our history in classrooms is another example of the rightwing attempt to shut down any kind of dissent.

Thank you for keeping Wonkette in writers and history. We love you.