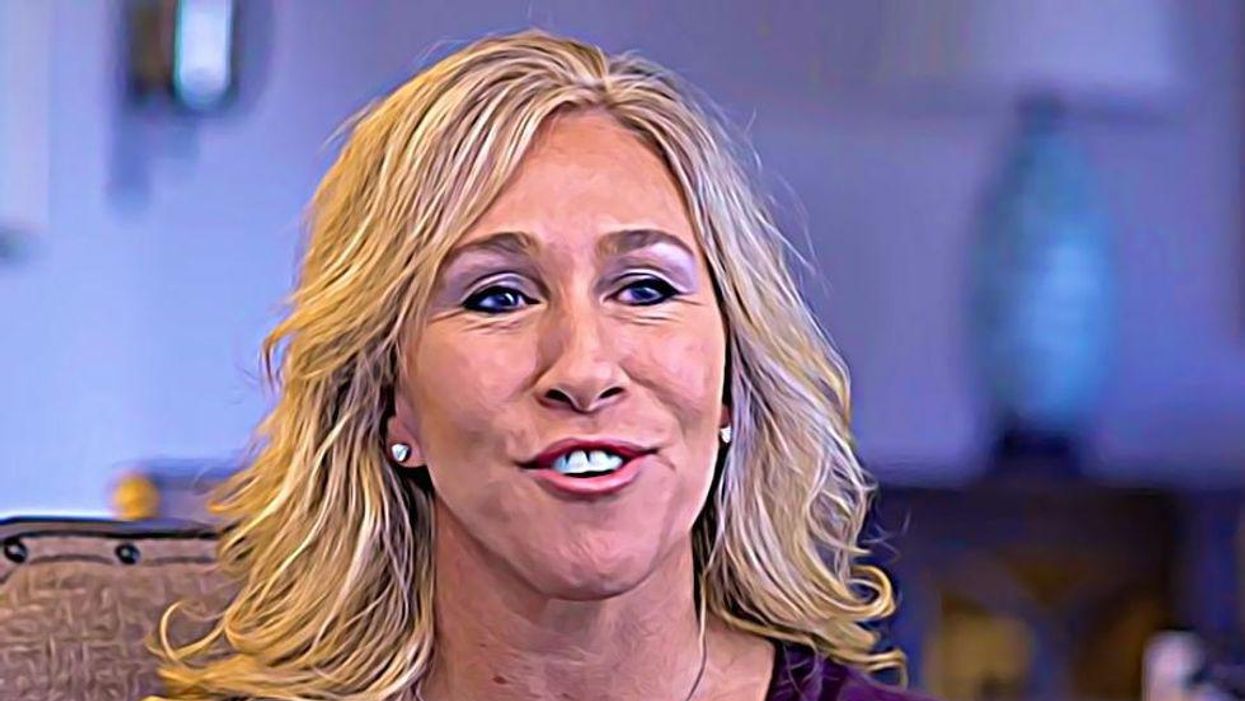 Very smart people like to explain how Democrats, especially those annoying progressives, must treat Senators Joe Manchin and Kyrsten Sinema with kid gloves lest they peace out and officially defect to the GOP, where they'll receive a free toaster in exchange for restoring Mitch McConnell to his position of absolute power.

Maybe the rumors are true and this could happen. It just seems unlikely, and even Chris Cillizza considers it a dumb move. All Manchin and Sinema can talk about is bipartisanship, specifically the infrastructure deal they negotiated with Republicans. However, the GOP sedition caucus thinks BIF is communism. Marjorie Taylor Greene, who's somehow a member of Congress, has sicced her deranged supporters on the 13 "traitor" House Republicans and 19 GOP senators who supported the bill.

GOP Rep. Fred Upton has received death threats over his BIF vote. That's arguably worse than Sinema's angry constituents following her into the bathroom or interrupting her no-doubt thrilling conversation with GOP Sen. Tim Scott. Greene insists she doesn't support violence against anyone, but she seems to imply that the death threats will continue until morale improves. 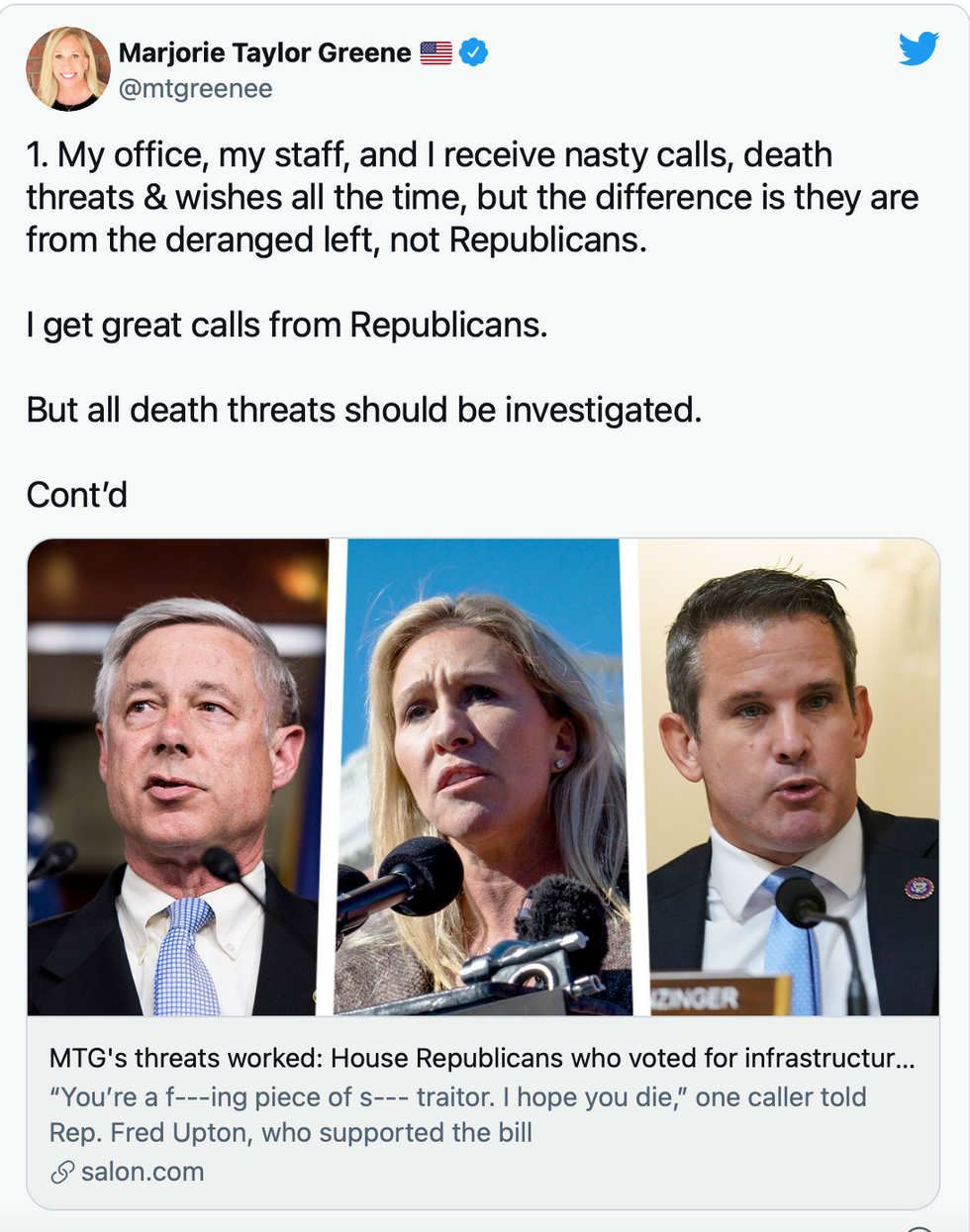 My office, my staff, and I receive nasty calls, death threats & wishes all the time, but the difference is they are from the deranged left, not Republicans. I get great calls from Republicans. But all death threats should be investigated.

However, the calls will continue and primaries will ensue. Republicans in the House and the Senate need to learn a lesson. Stop helping Democrats destroy our economy, take away our freedoms, enslave us in crippling debt, and corrupt our society with immoral policies.

Upton won his last primary election by 25 points. A half-assed MAGA primary challenge probably concerns him far less than a bomb in his car.

The "Infrastructure" bill was only made possible by 19 Republican Sell-Out Senators, then it was only passed because the unlucky 13 Republicans in the House voted FOR it.

6 brave Democrats voted NO, and if the traitorous 13 had voted NO the bill would have failed.

The “six brave Democrats" are Reps. Alexandria Ocasio-Cortez, Cori Bush, Jamal Bowman, Rashida Tlaib, Ilhan Omar, and Ayanna Pressley. Greene's crushing on the Squad now, but that's the modern GOP for you: Voting for a bipartisan infrastructure bill is worse than all the socialism.

Liz Cheney didn't vote for BIF, either, but she's still considered no better than the other "traitor Republicans" because she believes somewhat in democracy. Her voting behavior suggests she's not entirely convinced everyone should vote, but she doesn't think Donald Trump should steal elections. She's also pretty sure he lost the last one. That is enough for craven asshole Ted Cruz to consider Liz Cheney a Democrat.

Here's how Twitter troll and Texas Senator (in that order) Ted Cruz responded Saturday to a CNN tweet that asked, "Is there a lane for Liz Cheney in New Hampshire in 2024?":

"Yes. It's called the Democratic primary."

Cheney's and Cruz's actual voting records are remarkably similar. The only major difference is that Cheney can still see sunlight because she doesn't have her head stuck up Trump's sphincter. 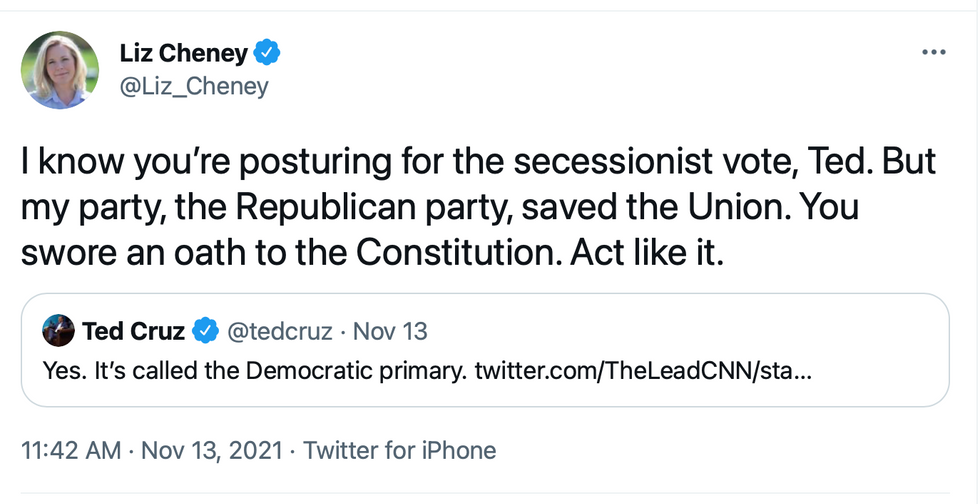 Cheney has cast shade directly on Trump, so she has no problem with his toadies. She tweeted:

"I know you're posturing for the secessionist vote, Ted. But my party, the Republican party, saved the Union. You swore an oath to the Constitution. Act like it."

Never content to just slither away, Cruz suggested that Cheney and Kinzinger "hurry up and get their bottom-rated MSNBC show." (Yes, Cruz has adopted Donald Trump's obsession with TV ratings.)

Senator, you've been given a huge position to lead and tell people truth. Yet you have squandered it on lies and abused the patriotism of those who trusted you. I will have zero regrets… will you?

Cheney and Kinzinger aren't liberals or even moderates, but they are RINOs now because they've publicly defied Trump.

Republicans might defend Manchin and Sinema for as long as they're pains in Democrats' asses, but if they moved to the GOP neighborhood, the waiting MAGA mob wouldn't greet them with a casserole. There's no coming back from from twice voting to impeach Trump and supporting the bipartisan infrastructure deal.

If Manchin or Sinema believe they'd rate better treatment as Republicans than Cheney, Kinzinger, Upton, and other “traitor" RINOs, they've deluded themselves. Democrats are the only true friends those two have.

Yr Wonkette is 100 percent ad-free and entirely supported by reader donations. That's you! Please click the clickie, if you are able