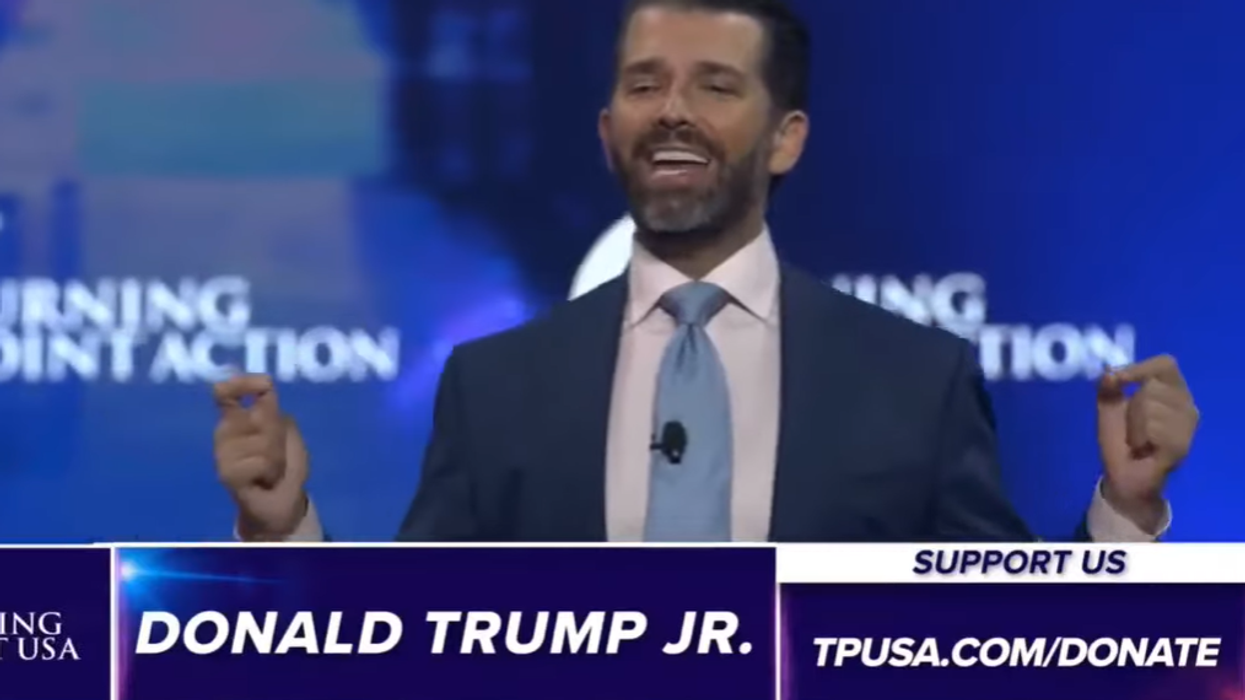 If you follow media watcher types on Twitter, you are probably aware that Charlie Kirk's young creeper group Turning Point USA is throwing some kind of gathering this week for young creepers, and that all the biggest white celebrities in the conservative movement are addressing it. That's where we got Sarah Palin saying you betcha she's not takin' no vaccines, over her dead body.

That's where we got this James O'Keefe video that ... we can't even describe it. It's like if evangelical Christian aliens came to earth and tried to do an impression of what cool college kids who have sex are like.

And speaking of things that are almost like regular human things but end up missing the mark entirely, here is Donald Trump Jr. and his face, talking about faith and how, just FYI, it's no more Mr. Nice Christ for him these days.

In that video, Junior explains, like a reject who has finally found a peer group that doesn't make fun of him for peeing his pants all the time, how excited he was to fly all the way out to talk to the Turning Point USA kids.

In that video, Junior shakes his hands in the air and says "THEY CAN'T CANCEL US ALL!" He explains that for a "half century," his side has been playing "teeball," while the libs have been playing "hardball and cheating."

And that's when he says conservatives just can't be Christlike anymore, LOLOL the way LOLOL they've always LOLOL been.

"I understand sort of the Biblical reference, I understand the mentality, but it's gotten us NOTHING," said Junior, whining that he sort of gets, you know, "Bible" or some such shit, he understands that "mentality," but guess what, SUNDAY SCHOOL SUCKS AND IS BORING.

Is the Bible even relevant to the challenges white conservatives like Junior and the other unfuckable deplorables at TPUSA's convention face every day? Is there any story in there about Jesus flipping over tables and flipping his shit because they're teaching critical race theory in the elementary schools of Nazareth? What about a parable about Jesus uncanceling the 5,000?

"I am the way, the truth and the life," said Jesus. But nope, Junior knows a better way. Probably this way, we are guessing:

This is what white conservative gatherings look like in 2021. These people are not OK.