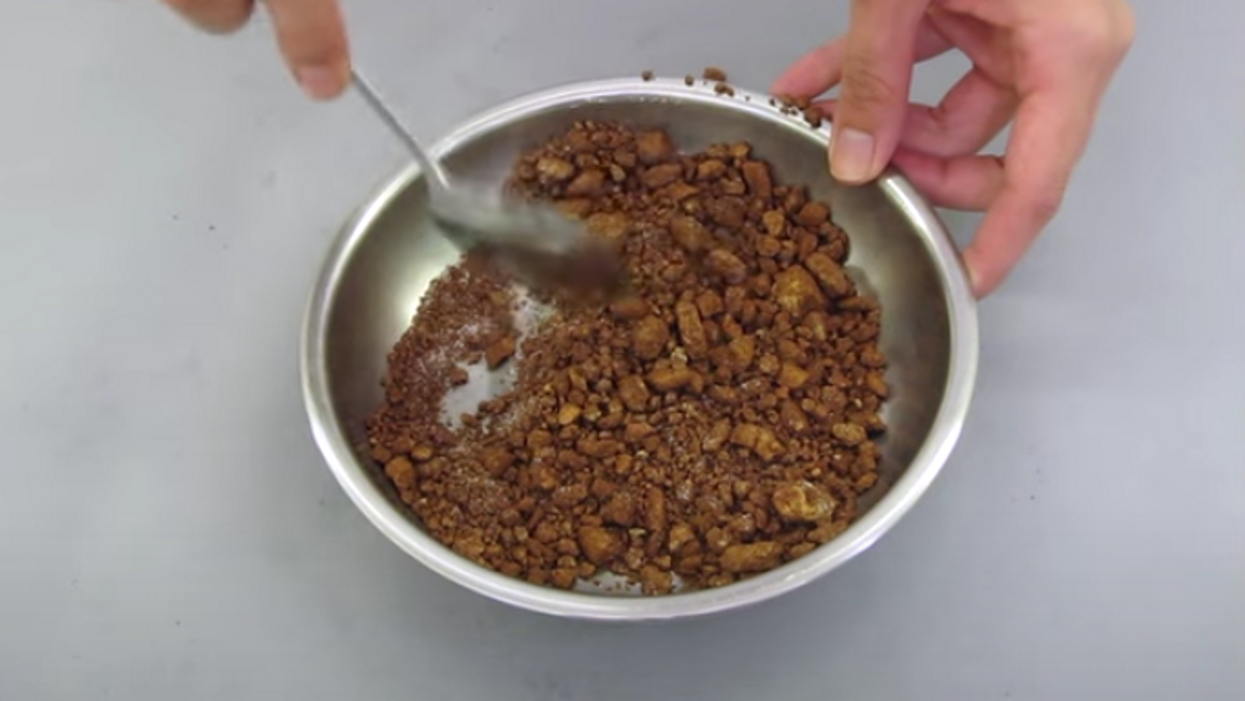 If we were worse people, we would all be millionaires right now. Billionaires, probably. Because if we have learned anything over this pandemic, it is that there is a frighteningly large segment of the population who will turn their noses up at anything an actual doctor says, but who will guzzle bleach no-questions-asked at the suggestion of some random Instagram person. Each time they come out with a new thing — colloidal silver, white oleander, bleach enemas — it seems like they have hit rock bottom, or should have. "Well, at least it can't get any more bizarre than this," you said to yourself, probably, when they were putting horse paste up their butts.

Oh how wrong you (probably) were. Because this whole damn time they were eating and bathing in "magic dirt." Go figure!

Brandy Zadrozny at NBC reports that since at least May, anti-vaxxers and other fringe healthcare enthusiasts have been in the thrall of Black Oxygen Organics (called #BOO), a multi-level marketing company that sells dirt that cures basically every ailment known to man. Not only does it cure COVID, users claim, it also "detoxes" people from the COVID vaccine. It also "cures" cancer, Alzheimer's, and autism, the last of which is really just not the kind of thing you "cure."

Black Oxygen Organics, or “BOO” for short, is difficult to classify. It was marketed as fulvic acid, a compound derived from decayed plants, that was dug up from an Ontario peat bog. The website of the Canadian company that sold it billed it as “the end product and smallest particle of the decomposition of ancient, organic matter.”

Put more simply, the product is dirt — four-and-a-half ounces of it, sealed in a sleek black plastic baggie and sold for $110 plus shipping. Visitors to the Black Oxygen Organics website, recently taken offline, were greeted with a pair of white hands cradling cups of dirt like an offering. “A gift from the Ground,” it reads. “Drink it. Wear it. Bathe in it.”

According to some enthusiasts, putting one's feet in water mixed with the dirt can even "detox" one from trauma, which is also not a thing. 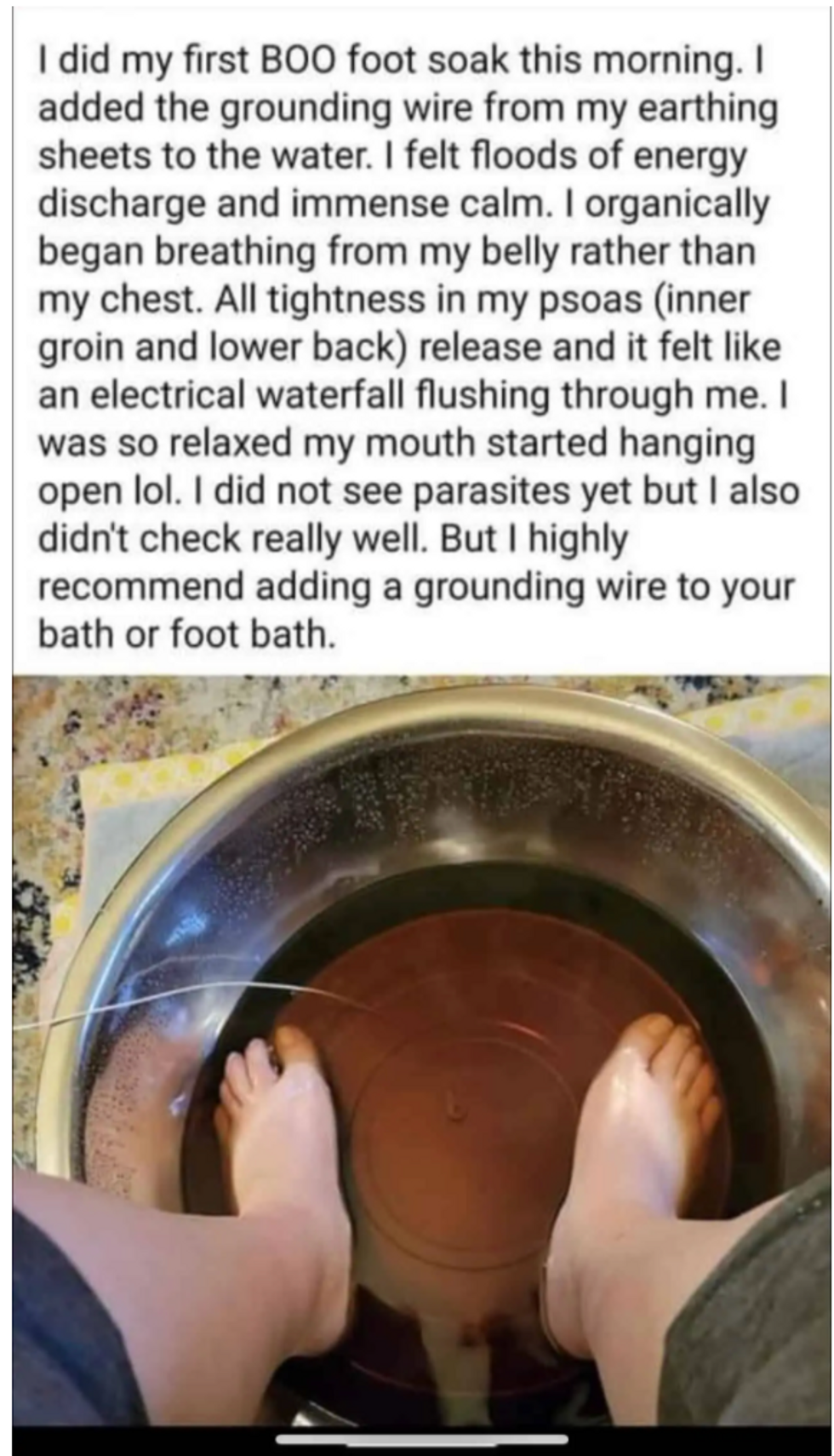 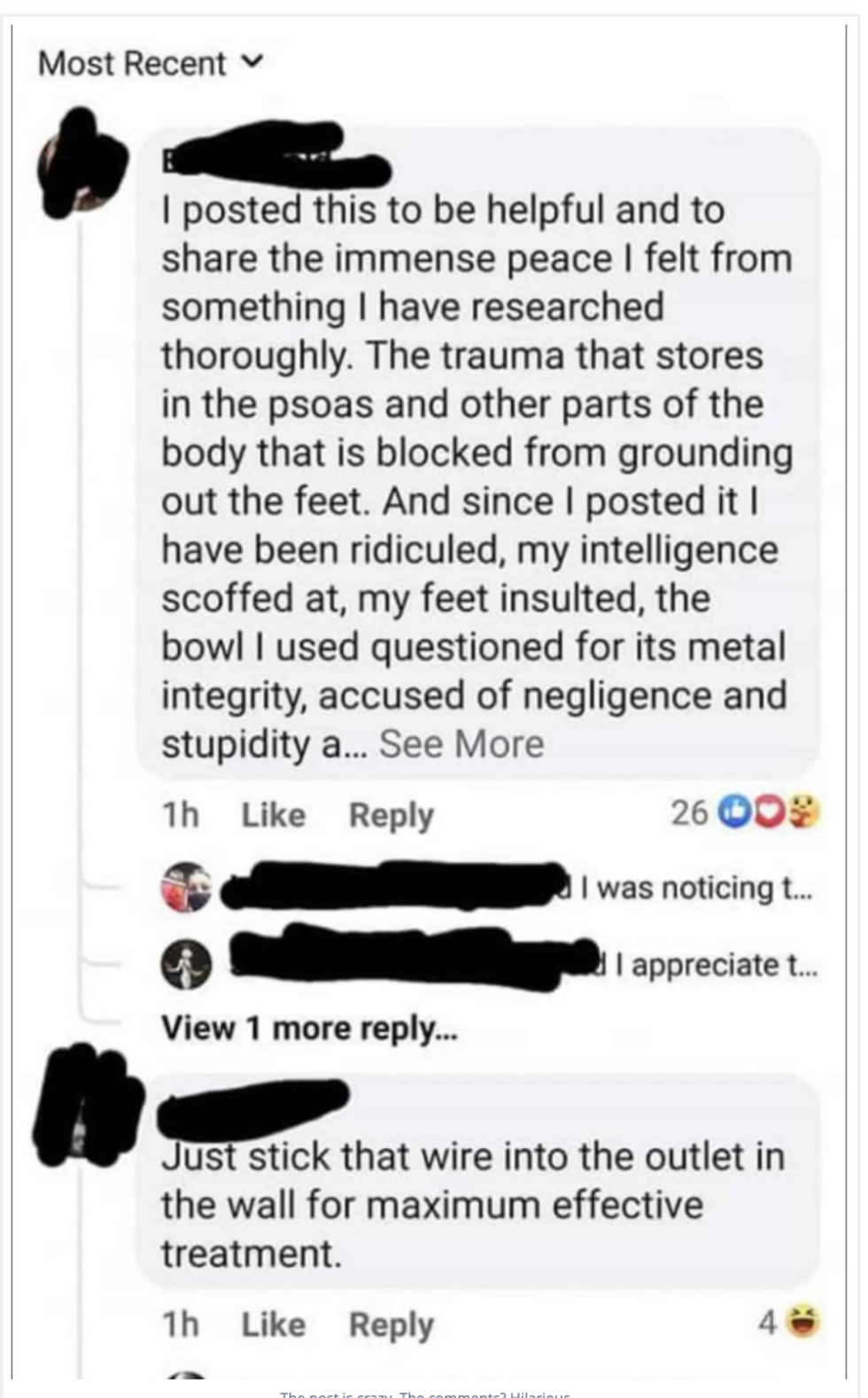 An article on BOO by nutritionist Abby Langer provides an even longer list of things it supposedly cures:

According to some of the posts I’ve seen, Black Oxygen Organics dirt can ‘cure’ diabetes, rid you of the parasites that everyone seems to think they have right now (and probably don’t), cleanse your body, cure your mold toxicity, fix your trauma, improve your gut health, calm your stress, end your chronic fatigue, help prevent Alzheimer’s disease, heal autism, fibromyalgia, and wounds.

One advertisement from the company suggested that pregnant women need to eat their dirt because "by child number 2 the mother has run out of mineral reserves and this leaves both the mother and the baby at increased risk for susceptibility to toxicity."

Pica, the desire to eat dirt or other non-food substances, is actually pretty common during pregnancy, but that doesn't mean it's a good idea.

Black Oxygen Organics was founded by Marc Saint-Onge, of Ontario, Canada — an "orthotherapist, naturopath, kinesitherapist, reiki master, holistic practitioner, herbalist and aromatherapist" who has been trying to sell people mud for several decades now. Saint-Onge had found himself in trouble with authorities a number of times for selling said mud and for practicing medicine without a license, but that apparently did not stop him from getting into the MLM game.

As far as grifts go, it was a relatively successful one — for a time.

Black Oxygen Organics’ vice president of business development, Ron Montaruli, described the craze in September, telling distributors on a Zoom call viewed by NBC News that the company had attracted 21,000 sellers and 38,000 new customers. Within the last six months, sales had rocketed from $200,000 a month to nearly $4 million, Montaruli said, referring to a chart that showed the same. (Attempts to reach Montaruli were unsuccessful.)

Four million dollars, A MONTH, from selling literal dirt! I'd like to say "And if you buy that I have some land to sell you in Florida," but this customer base would probably sign right up so long as I told them the land cures "leaky gut syndrome."

Unfortunately for Saint-Onge, Montaruli, and — per the law of MLM marketing — the five or so people at the top of the pyramid who were actually making some kind of money from this nonsense, it didn't last long. By September, Health Canada had recalled their products due to “potential health risks which may be higher for children, adolescents, and pregnant or breastfeeding women,” and the FDA was reportedly holding their products at the border and not allowing them into the country.

As it turns out, the magic mud that these people were being sold was from a bog in Canada that just so happened to be next to a landfill and, as such, contained a whole lot of lead and arsenic and, ironically, heavy metals.

In an effort to verify BOO’s analysis, NBC News procured a bag and sent it to Nicholas Basta, a professor of soil and environmental science at Ohio State University.

The BOO product was analyzed for the presence of heavy metals at Ohio State’s Trace Element Research Laboratory. Results from that test were similar to the company’s 2017 certificate, finding two doses per day exceeded Health Canada’s limit for lead, and three doses for daily arsenic amounts.

Growing concern among BOO sellers about the product — precipitated by an anti-MLM activist who noticed on Google Earth that the bog that sourced BOO’s peat appeared to share a border with a landfill — pushed several to take matters into their own hands, sending bags of BOO to labs for testing.

The results of that testing led to a class action lawsuit against BOO, and soon after that, their online merchant dropped them, making it impossible to send the products they weren't technically allowed to sell people anyway. Then, finally, two days before Thanksgiving, sellers and customers were told that BOO was officially going out of business.

Alas, as much as we'd all like to celebrate, it looks as though the fulvic acid enthusiasts have already latched onto a new multi-level marketing company called "The Solution," which also sells colloidal silver, because of course it does.

As easy as it is to make fun of people who eat magic dirt or join up with shady MLMs, the whole reason these scams are successful is because people are desperate. They're not all anti-vaxxers who are just being ridiculous — many of them are just people who are simply desperate for a cure they've been told by doctors they're never going to get and who are willing to try anything, or they're people who are desperate for money and financial security, and it's awful to take advantage of people in those situations. It would be bad enough just to sell them products that don't do anything, like homeopathic solutions and what have you, but selling people things that are actively harmful or business opportunities that will leave them in debt is a whole other level of cruelty.