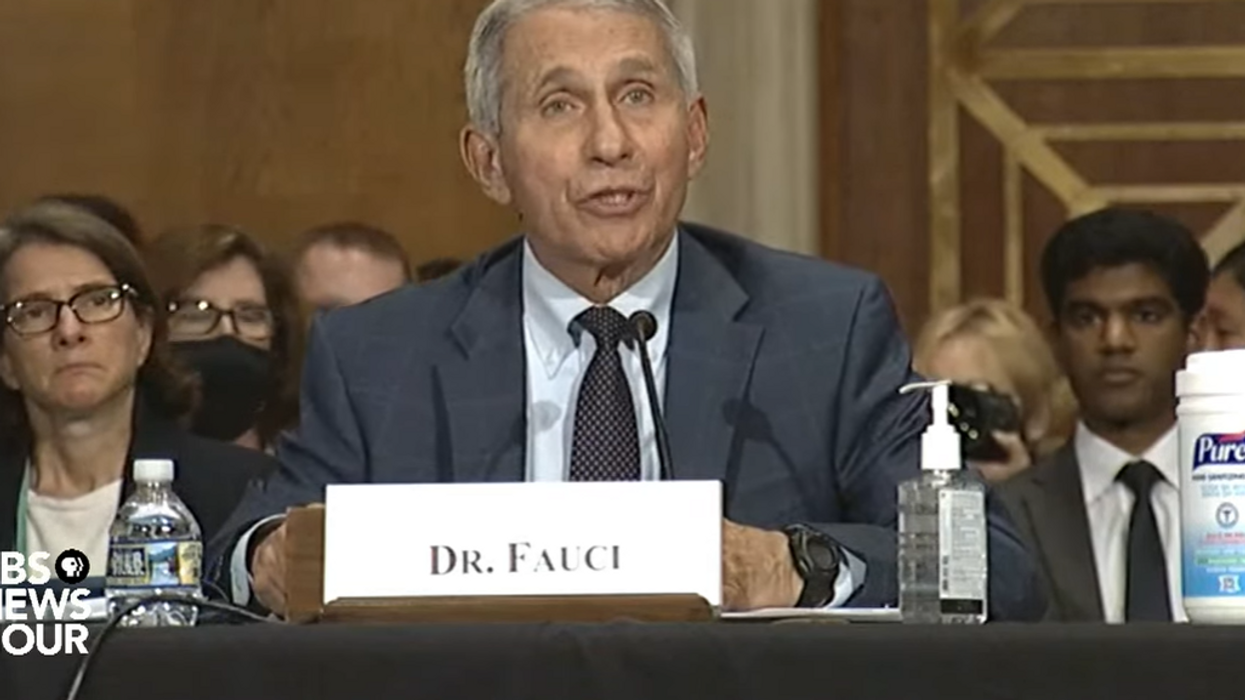 After yesterday's Senate Health, Education, Labor and Pensions Committee hearing, Rand Paul ought to send Roger Marshall a fruit basket. If not for Senator Marshall's unparalleled intellectual laziness, Senator Paul's rancid hackery would have been the sole focus of the hearing with Dr. Anthony Fauci. As it was, we got a little village idiot funtimes, punctuated by a hot mic "moron" slip for levity.

We're now in our third COVID year, probably everyone you know has it, and the CDC is having a wee tiny messaging problem. So naturally the GOP wanted to focus on the important issues: Tony Fauci's BUT HER EMAILS. Sainted Aaron Rupar tweeted the whole exchange between Kentucky's second worst senator and the president's chief medical advisor.

"We are here at a committee to look a virus now that has killed nearly 900,000 people. And the purpose of the committee was to try to get things out, how we can help the American public. And you keep coming back to personal attacks on me" -- Fauci to Rand Paulpic.twitter.com/8VHLLrGgDJ
— Aaron Rupar (@Aaron Rupar) 1641917709

Rand Paul is apparently trying to make political hay out of an email where Fauci pushed back on the lab leak theory by forwarding a Wired article, accusing Fauci of "a takedown ethic" that is "the epitome of cheap politics." A little too ironic, doncha think?

"Dr. Fauci," he mugged for the cameras, "do you really think it's appropriate to use your $420,000 salary to attack science that doesn't agree with you?"

"There you go again, you just do the same thing every hearing," Fauci sighed, adding with evident frustration, "As usual, Senator, you are incorrect with almost everything you say."

And on the one hand, the whole thing is just mind-meltingly stupid. But on the other hand, it's insanely dangerous because Paul's persistent antics, along with the rightwing misinformation cycle it feeds, paints a target on the back of a lifetime civil servant who could certainly ride off into the sunset and make much more money charging $50,000 a speech or as dean of a university.

Here's Fauci laying out the stakes, and calling out Paul's craven efforts to fundraise off it.

The last time we had a committee, or the time before it, he was accusing me of being responsible for the death of four to five million people, which is really irresponsible. And I say, why is he doing that?

There are two reasons why that's really bad. The first is it distracts from what we're all trying to do here today, which is get our arms around the epidemic and the pandemic that we're dealing with, not something imaginary. Number two, what happens when he gets out and accuses me of things that are completely untrue is that all of a sudden that kindles the crazies out there, and I have threats upon my life, harassment of my family and my children with obscene phone calls because people are lying about me.

Now I guess you could say, well, that's the way it goes, I can take the hit.

Well, it makes a difference because, as some of you may know, just about three or four weeks ago on December 21st, a person was arrested who was on their way from Sacramento to Washington DC at a speed stop in Iowa. And they asked, the police asked him where he was going, and he was going to Washington DC to kill Dr. Fauci. And they found in his car an AR-15 and multiple magazines of ammunition, because he thinks that maybe I'm killing people.

So, I asked myself, why would a senator want to do this? So go to Rand Paul's website and see "Fire Dr. Fauci" with a little box that says, "Contribute here." You can do $5, $10, $20, $100. So you are using a catastrophic epidemic for your political gain.

It's gross, and there's no response, so naturally Paul pivoted to saying that he was at the congressional baseball game when Steve Scalise got shot by a supporter of Bernie Sanders, which ... makes no fucking sense. Anyway, "#FireFauci" remains a "Featured Issue" on Rand Paul's website this morning. 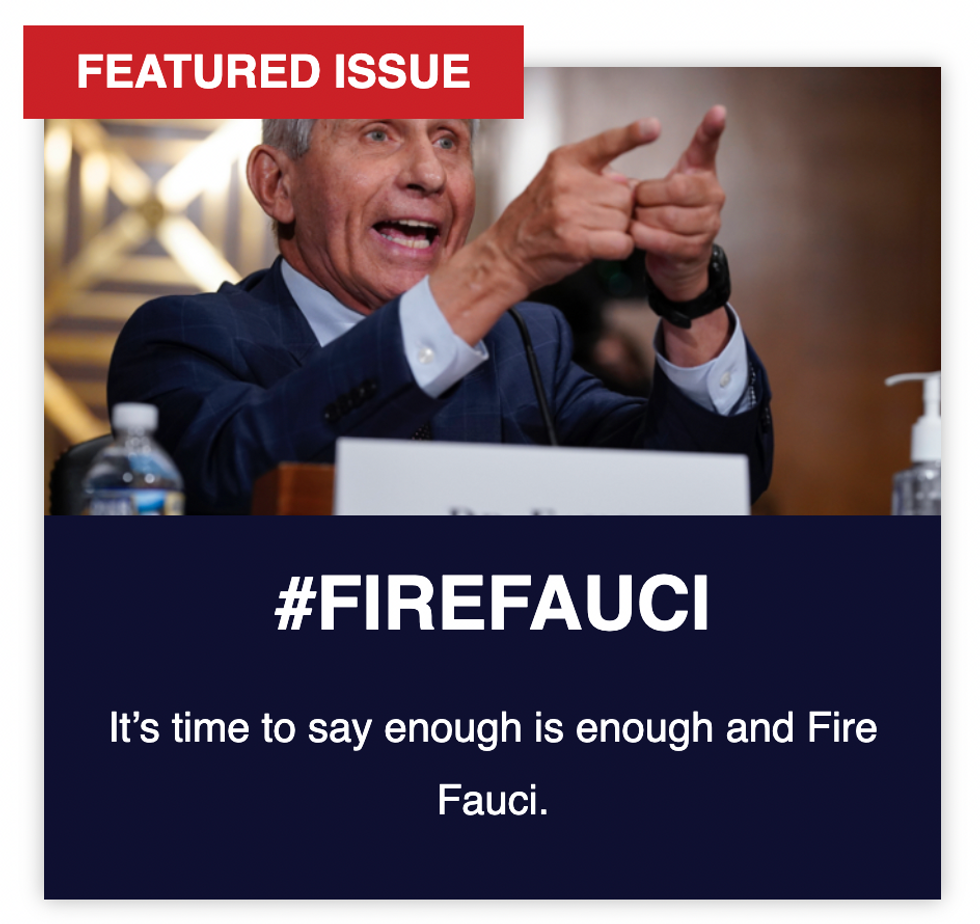 It's bloody depressing, and even Senator Mitt Romney was appalled.

“I’m sure you who are testifying here today recognize that some of what we do is performing and some of what we do is to become informed. And I do both from time to time. So I’m not just in one camp or the other in that regard,” Romney said. “But I do want to point out how much I personally — and I believe the great majority of the people in our country — respect you individually and professionally for the work that you do. You are scientists, not politicians. Nevertheless, you are being made subject to the political whims of various political individuals. And that comes at a high cost, which unfortunately, I fear will lead some to not want to participate in helping our government.”

Thank goodness for the relative harmlessness — graded on a steep curve — of Kansas's Roger Marshall and his colleague Tommy Tuberville from Alabama.

Tubsy just wanted to know "for my constituents back in Alabama," who are apparently so confused by "the fearmongering on the Left" that they're scarfing down horse paste, if an FDA approved anti-viral drug is a better alternative.

"Ivermectin! My constituents read this, hear about it, 40-year drug, they call it a wonder drug. It's about a nickel a tablet. It's done wonders supposedly in India and several other places. And then you have this new anti-viral pill, that is coming out, and my constituents are saying this is going to cost $500, $600, $700 each. Could you give me a rundown on the difference in those two? What you think about them, get it on the record here so I can tell my people back home this is what Dr. Fauci says."

Mad props to the doctor for slowly and clearly explaining why Paxlovid, an anti-viral drug that has been subjected to randomized, placebo-controlled trials, is better at keeping immunocompromised patients out of the hospital than an anti-parasitic which routinely causes uncontrollable diarrhea.

But we promised you a little treat, and here it is.

"You're so misinformed, it's extraordinary ... what are you talking about" -- Fauci to Roger Marshallpic.twitter.com/mKsrUUfUdx
— Aaron Rupar (@Aaron Rupar) 1641926102

Earlier in the hearing, Marshall tried to do a GOTCHA using something from Project Veritas which turned out to have nothing whatsoever to do with the NIH.

"Once again, Senator, it pains me to have to point out to the American public how absolutely incorrect you are," Fauci sighed.

But Marshall was not to be deterred.

"Dr. Fauci, according to Forbes, you have an annual salary in 2020 which was $434,000. You oversee over $5 billion in federal research grants. As the highest paid employee in the entire federal government, yes or no, would you be willing to submit to Congress and the public a financial disclosure that includes your past and current investments?" Marshall demanded. "After all, your colleague Dr. Walensky and every member of Congress submits a financial disclosure that includes their investments."

Here on Planet Earth, you don't have to get Dr. Fauci's salary from Forbes. Along with his mandatory financial disclosure, it's a matter of public record and has been for nigh on four decades, as the doctor noted.

"Well the big tech giants are doing an incredible job of keeping it from being public," Marshall insisted, citing exactly no evidence.

"You're so misinformed it's extraordinary," marveled Fauci, as Marshall stammered some nonsense about possible "shenanigans" in an effort to make this seem like a reasonable line of inquiry, rather than an admission that no one on his staff knows how to use Google.

"Sir, you are getting amazingly wrong information," Fauci added, before being caught muttering to his aides, "What a moron! Jesus Christ."