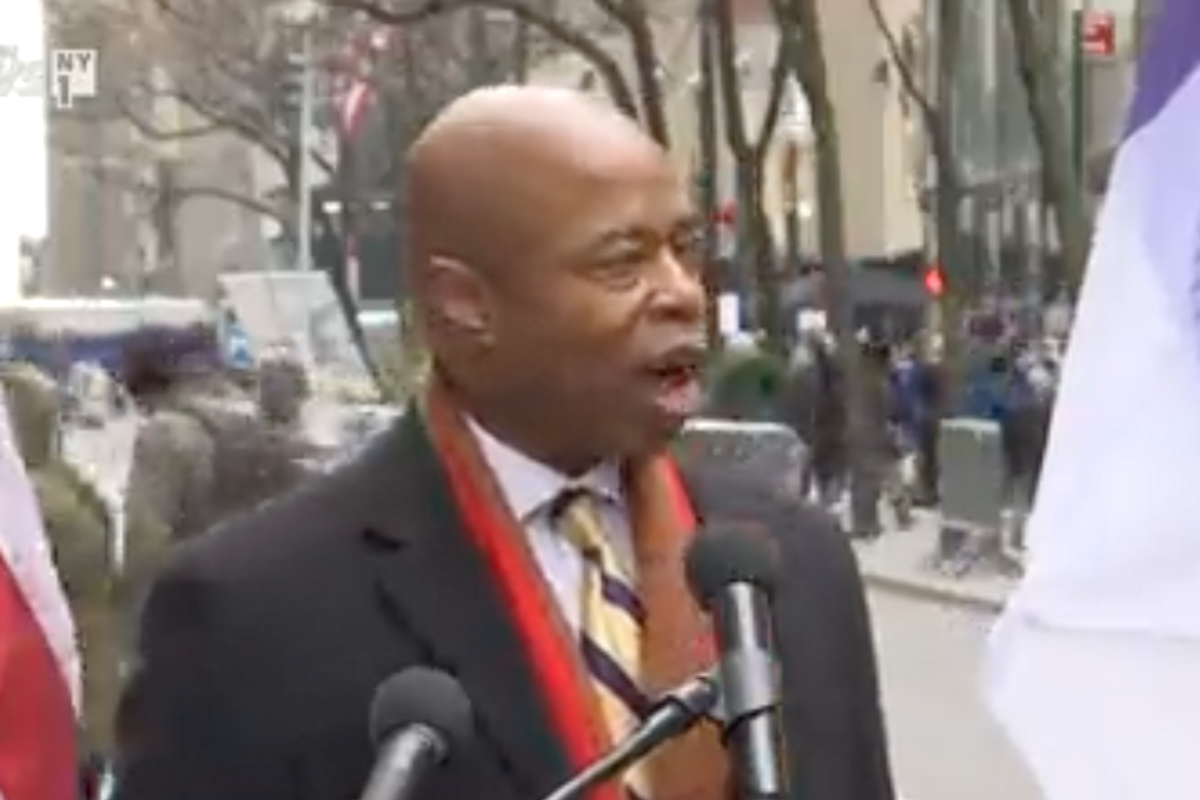 I was never in favor of putting a cop in charge of New York City, especially when there are so many qualified Broadway performers available. A mayor who could sing and dance is a game changer. Unfortunately, last year’s racial justice protests and the frustrating existence of homeless people sent supposedly liberal New Yorkers running into the arms of former New York police captain Eric Adams, who’s terrible.

“They better enjoy that one-day reprieve because January 1st they are going back into segregation if they committed a violent act,” Adams said to laughter from an audience that included correction union officials attending a press conference on Thursday.

In response, 29 City Council members sent Adams a letter reminding him that the United Nations considers solitary confinement torture, because that’s what it is, and evidence shows that the barbaric practice only "leads to more violence.” There are reasonable alternatives that don’t involve playing patty-cake with murderers. However, Adams wasn’t interested in listening to the incoming, majority-female City Council. He considered it more constructive to just thump his chest and yell at them.

The New York Post reports, as it sometimes does:

“I am not going to be in a city where dangerous people assault innocent people, go to jail and assault more people,” Adams told reporters after an unrelated press conference in front of Rockefeller Center. “You cannot have a jail system where someone sexually assaults a staffer, slash an inmate and then say it is all right.”

Cops always insist that unless they can cop like they’re in Guatemala they might as well not cop at all. The City Council members aren’t strung-out hippies singing "Everything’s Alright.” They’re just opposed to torture.

Adams claimed the council members were “romanticizing the issue,” like girls do, so he’s just going to ignore them and do what he wants, as big boys do.

“There is a body of people that are coming into the City Council, they have no desire in moving our City forward,” he added. “Their desire is to be disruptive. What am I going to do? I’m going to ignore them. I’m going to stay committed, undistracted and I’m going to grind.”

The council members are duly elected officials who represent the city. The mayor should engage them in good faith out of respect for his constituents, if nothing else. The whole press conference got weirder when Adams delivered what can only be described as a classic cinematic villain monologue.

Incoming Mayor @ericadamsfornyc assailed members of @NYCCouncil for sending letter asking him to reverse position on solitary confinement:\n\n"I wore a bullet proof vest for 22 years and protected the people of this city. When you do that, then you have the right to question me..." https://twitter.com/TweetBenMax/status/1473334221125136391\u00a0\u2026pic.twitter.com/PMz6L08tCx
— Gloria Pazmino (@Gloria Pazmino) 1640119581

ADAMS: I wore a bullet proof vest for 22 years and protected the people of this city. When you do that, then you have the right to question me.

It’s concerning that Adams thinks this is a police state where only cops have the right to question the new Cop Mayor of New York. He answers to New Yorkers, not the other way around, but we can expect at least four years of this posturing. The local and even national media will likely praise Adams for putting the libs in their place.

I can’t decide if Adams’s power-mad rant is more like the “King Kong ain’t got shit on me” scene from Training Day or Jack Nicholson’s A Few Good Men speech about eating breakfast “4,000 miles from Cubans who are trained to kill me.”

Oh, Denzel is probably more apt, though Adams shouldn’t take that as a compliment.