Skip to content
These days, there's a consistent message in the opinion section of The New York Times: that the typical Times reader is a terrible person. 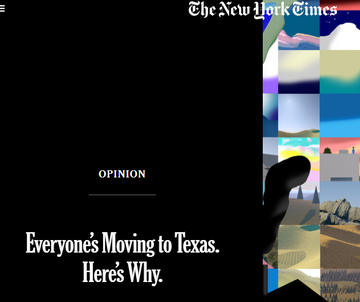 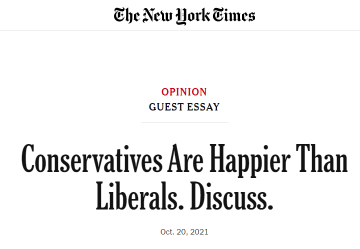 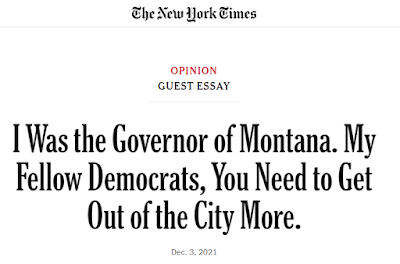 The headlines don't always give the bias away. Here's a piece by Liza Featherstone headlined "Josh Hawley and the Republican Obsession With Manliness." Even though Featherstone says she's a liberal, her argument is that Hawley really might be on to something:

... Mr. Hawley ... is tapping into something real — a widespread, politically potent anxiety about young men that is already helping the right.

... He is right about some things. Deindustrialization has stripped many men of their ability to earn a decent wage, as well as of the pride they once took in contributing to prosperous communities. Boys are sometimes overdisciplined and overmedicated for not conforming to behavioral expectations in school. And while more women than men are diagnosed with anxiety or depression, men are more likely to commit suicide or die of drug overdoses.

According to Featherstone's own source, men have been more likely than women to die of drug overdoses at least since the late 1990s. The difference became more widespread at the very end of the Obama presidency and remained widespread for several years of the Trump presidency: 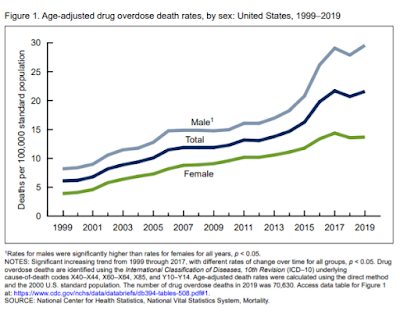 Given the Trump-era numbers, I'm puzzled as to why this is a liberal problem.

And I'm puzzled as to why higher levels of anxiety and depression among females is a crisis of masculinity. If it's because more males commit suicide, that appears to be because -- again according to Featherstone's own souce -- more males use guns. Again, that's not the fault of liberals.

None of these problems are caused by liberals. But liberalism hasn’t offered a positive message for men lately. In the media, universities and other liberal institutions, it sometimes seems that every man is potentially guilty of something. As Mr. Hawley puts it, men are being told by liberals that “they’re the problem.” Our side — the progressive side — has struggled to articulate what a “nontoxic” masculinity might look like, or where boys might look for models of how to become men.

But Hawley is saying that young men are engaging in toxic behavior. Why isn't that a negative message that drives those young men to despair (and away from his party)?

Nope, it's a problem for our side only:

This has set up an existential crisis for the left, threatening its ability to win elections. For years, young men have been flocking to the far right, finding its messages and disgruntled virtual communities on YouTube and Reddit. In 2016, Donald Trump won the male vote by 11 percentage points.

What Featherstone doesn't say -- again, according to her own source -- is that Trump won men by only 2 points in 2020, and that was largely because he won white men (and whites overall) by double digits. 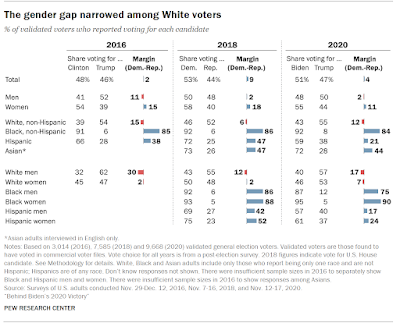 So among male voters, Trump beat the Democrat by double digits in 2016. Gee, what was unusual about the person at the top of the Democrats' 2016 ticket? Thinking, thinking...

... Mr. Hawley knows how to exploit the cultural anxieties of ordinary people to advance his brand of politics. But he hasn’t offered solutions to this “masculinity crisis” because neither he nor his party has any.

Men and boys need good jobs, affordable access to team sports, an education system sensitive to their social and emotional development, public parks, mental health support, access to substance abuse treatment and paternity leave. All of this requires public funding, which is far more likely to come from the left than the right. To thrive, many men also need the freedom not to be “men” at all, but rather to become sissies, scrawny historians or even women, a cultural evolution Mr. Hawley and his conservative ilk adamantly oppose.

... [A] vision of shared purpose and civic virtue won’t come from Mr. Hawley any more than funding for more public baseball fields will. He, after all, has opposed just about every common public project recently proposed, from the bipartisan infrastructure bill to the Build Back Better Act to the Green New Deal.

But somethow this failure to do anything for males isn't a crisis for the Republican Party. It's only a crisis for Democrats.

Meanwhile, the left will need to find a better way to talk to men; half of the population is far too many people to abandon to the would-be strongmen of the far right.

Who'll do nothing for them, which apparently doesn't matter, because, it seems, only Democrats face consequences for political or rhetorical failures.