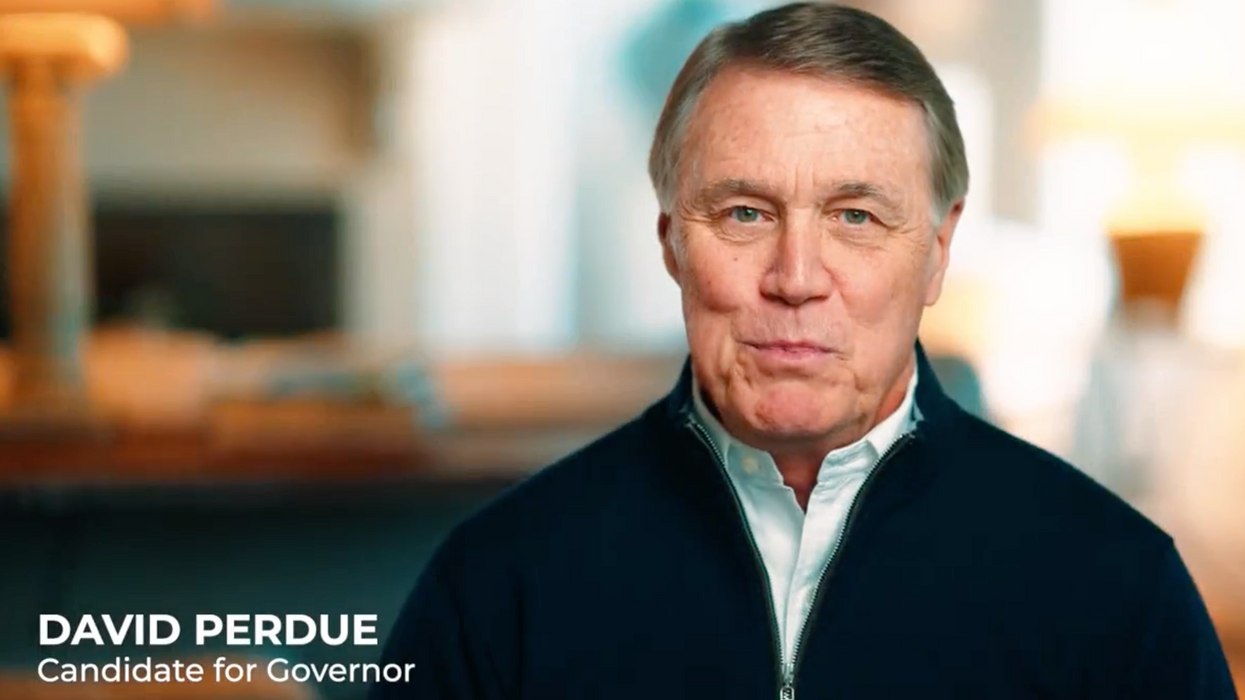 Where can we find an (ex-) incumbent who just got his ass kicked by a guy half his age and who is as charismatic as moldy toast to be our party's standard bearer? Said no one ever.

David Perdue is the answer to a question no one asked, with the possible exception of Donald Trump, who's mad at sitting Georgia Governor Brian Kemp and seeks to replace him with another Botoxed white grandfather from central casting. There is literally no other rationale for Perdue's announcement this week that he intends to challenge Kemp for the Republican gubernatorial nomination next year.

And because the Republican Party has been devoured by brain worms, Perdue is now spouting the most insane horse shit in response to reporters' questions. To wit, he's making elimination of Georgia's progressive income tax, which tops out at 5.75 percent, the focus of his campaign.

“I’m laying out the high ground here," he told the Atlanta Journal-Constitution. "I’ve lived in Texas and Tennessee, and I’ve certainly seen how Georgia is falling behind competitively. This is my wheelhouse. We’ve got to be more competitive. There are ways to pay for it, and other states have accomplished that. I’ll work with the Legislature on it — instead of fighting with them — to make this a reality.”

Why, yes, he did just yadda yadda yadda getting rid of a full 50 percent of the state's revenue with "there are ways to pay for it." Perhaps he was hoping that listeners would envision the regular GOP solution of regressive consumption taxes that hit the poors hardest or perhaps cuts to entitlement programs. He was probably not looking to get fragged with math by a member of his own party.

“Well, you either eliminate k-12 education – that’s about what we put into it – or if you don’t want to do away with that, I think you would wind up with a 17% state sales tax rate to offset the loss of revenue, if you don’t change the base," Georgia House Appropriations Chair Terry England told the paper.

Perdue is also telling some whoppers about the election, and what he would have done in Kemp's place to steal it for Trump.

“Think about how different it would be today if Kemp had fought Abrams first instead of fighting Trump,” he said in a video announcing his run, apparently referencing the settlement agreement with a group backed by Stacey Abrams which Trumpland claims prevented signature matching. (They are lying.)

“Kemp caved before the election, and the country is paying the price today," Perdue continued, despite the fact that Kemp was not a party to the settlement agreement at all.

Perdue repeated this nonsense, as well as a whole lot more lies, to Axios, which published a brutally terse factcheck yesterday. (Sometimes those bullet points hit the target dead on.)

Perdue also claims to have told Kemp at the time that he needed to convene the legislature to investigate the bogus fraud allegations.

This one is getting fact checked in real time by Kemp's people, who are livid.

“David Perdue lies as easily as he breathes. Perdue never asked the Governor to call a special session. Period," Kemp's comms guy Cody Hall told Axios. "In fact, his campaign — and Perdue himself — asked for there not to be a special session called. At the time, they knew that a special session could not overturn the 2020 general election, and that changes to election rules for an election already underway are not allowed under state law or court precedent. Now Perdue is a desperate, failed, former politician who will do anything to soothe his own bruised ego."

All of which may be true, but he's a desperate, failed, former politician with Trump's endorsement, which is probably enough to get him out of the Republican primary these days. That and scream that a Black woman is using Georgia "as a steppingstone to the White House." The horror!