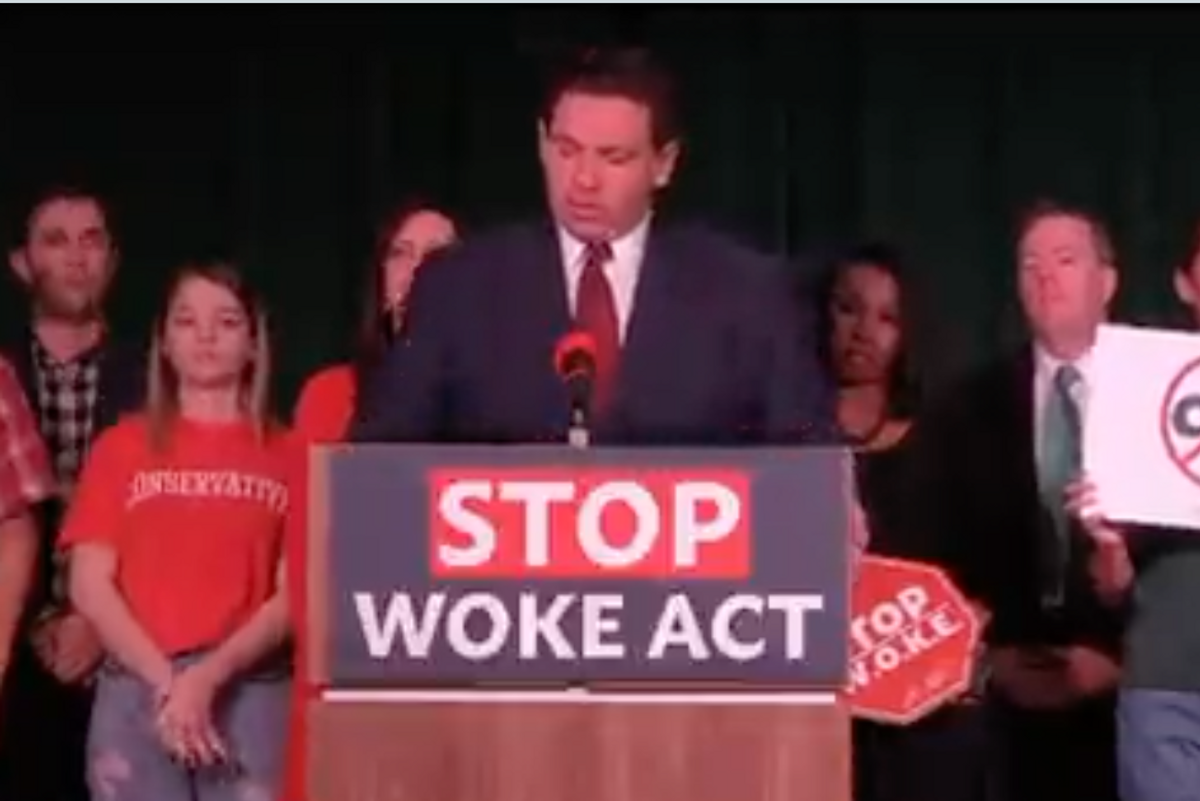 Last week, Florida Governor Ron DeSantis launched the Stop W.O.K.E. Act, which started as a liberal-owning acronym and ended in a traffic jam of disjointed words: "Stop Wrongs Against Our Kids and Employees Act.”

Here’s what he said at an obvious campaign rally posing as serious government business:

We have the responsibility to stand for the truth, for what is right. We also have to protect our people and our kids from some very pernicious ideologies that are trying to be forced upon them all across the country.

DeSantis thinks certain thoughts are dangerous and that it’s important that the government police those thoughts, even among adults in the private sector.

Lawyer Ron Filipkowski compared the Stop W.O.K.E. Act to the Texas anti-abortion law that grants private citizens the right to sell out their neighbors for fun and profit. If you think your student’s school is teaching critical race theory, just sue them!

In his never-ending quest to be more MAGA than any other Governor, Desantis this morning announces his \u2018Stop WOKE Act\u2019 to create a private right of action, modeled after TX abortion law, to sue schools if they catch them teaching CRT.pic.twitter.com/1M9a2Ns3tM
— Ron Filipkowski (@Ron Filipkowski) 1639578889

DeSantis said that parents “know best what’s going on and they’re in the best position” to freak out and bully educators. A parent’s nuisance suit can force “discovery,” which I suppose makes sense because DeSantis attended both Harvard and Yale. Schools would also lose funding if they hire critical race theory “consultants” or use critical race heresy in employee training at schools.

The Stop W.O.K.E. Act targets sensitivity and racial awareness training in professional settings. People should’ve realized conservatives were coming for antiracist training/policies as soon as that white lady cried during a corporate retreat.

The adoption of woke ideologies like Critical Race Theory is the left’s latest method to delegitimize America’s institutions and our founding principles. From schools to corporations, Democrats are working to indoctrinate our nation’s youth with hatred — hatred towards one another and towards America.

There’s no use countering his obvious lies that neither critical race theory nor antiracism training promotes hatred. That’s Fox News. Its primetime lineup is one long, angry screed.

Tuesday, the news broke that DeSantis’s pick to head Florida’s Department of Juvenile Justice, Eric Hall, used critical race theory in his 2014 dissertation. He wrote: "Critical Race Theory (CRT) provides a grounded set of beliefs that seek to uncover and expose racism and its related impact on those who are often without power, in the case of this study, minority students.”

Hall also checked his privilege as a white, middle-class male in the dissertation and cited Peggy McIntosh's 1989 essay "White Privilege: Unpacking the Invisible Knapsack.” DeSantis’s office claims that Hall now believes “CRT has no place in our schools.” That’s a long way from when he wrote: “I did not intentionally fail to see or listen when sleeping in this advantaged life of White privilege, but in awakening from this sleep, I can now lead an existence focused on exposing inequity and its effects.” You can almost smell the patchouli-drenched man bun.

The governor’s communications director, Taryn Fenske, defended Hall, insisting he had “limited choices for doing statistical qualitative studies” within his department at the University of South Florida. He could choose either critical race theory or female gender studies. He went with CRT because he was studying how to reduce the number of Black youths in the juvenile justice system.

“It’s unfortunate that in some instances when you go through a doctoral program you have a committee that’s going to lean a certain direction and why students have to cater their work to that,” Fenske said in a statement.

Yes, this poor downtrodden white youth with limited choices was forced into a life of wokeness. If only there were an academic framework for exploring how these power imbalances lead to unfortunate outcomes. After all, if CRT is racist, and the impact is greater than individual actions but in fact systemic, this would actually justify CRT’s own premise. That’s the irony Republicans will never acknowledge.