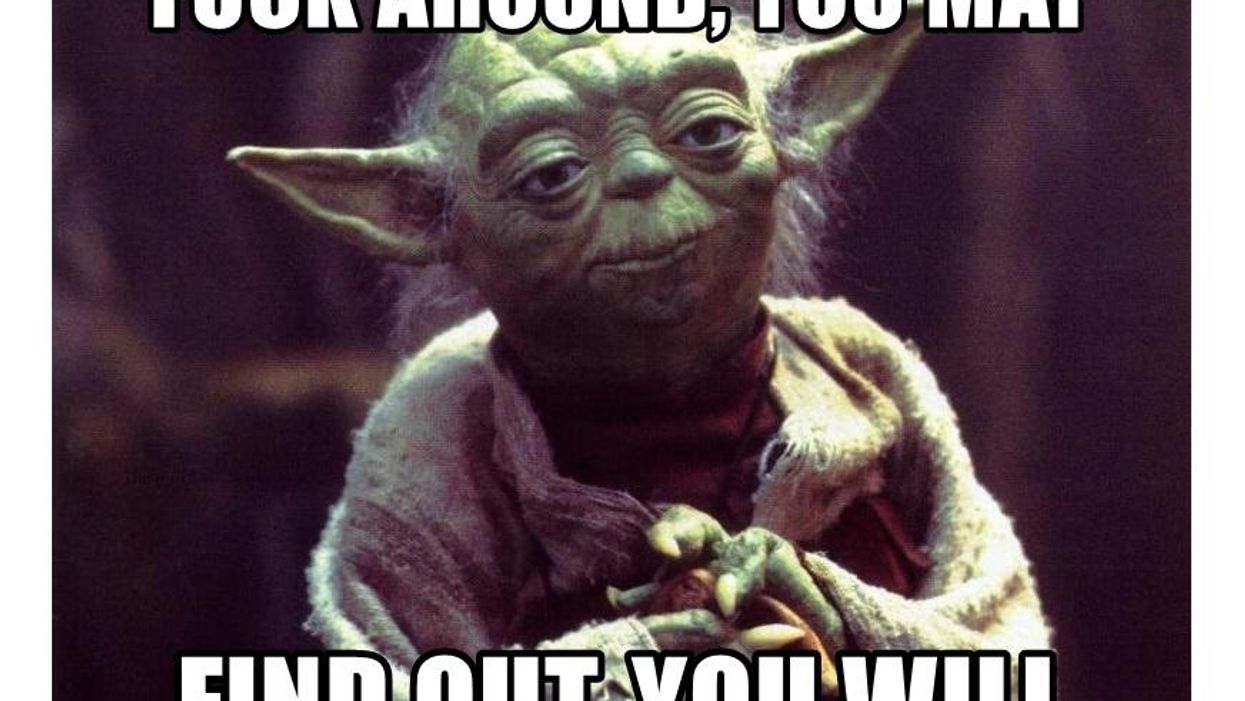 They might also say Kuczwanski is an instant refutation to the idea that an armed society is a polite society, man. He was armed, and according to "sources familiar with details of the investigation," not especially polite, escalating a minor fender bender into a shootout that ended up with him being killed. Uh, man.

Now, as Florida Politics carefully points out, there are "conflicting reports" about what occurred at the intersection of Bannerman Road and Thomasville Road in Tallahassee, but those sources say that Kuczwanski caused the initial accident, and then afterwards, after he and the other driver had pulled off the road into a parking lot, escalated it into a vehicular assault and a gunfight, which Kuczwanski did not win.

According to those anonymous insiders, Kuczwanski's BMW drifted out of his lane and he collided with a white Prius. Both drivers pulled into a parking lot, the Prius's driver "confronted" Kuczwanski about the accident, and then the Prius driver got back in his own car to wait for the police or deputies or whatever Tallahassee has, maybe Deathbots, it's Florida, man.

The minor bureaucrat, aged 53, apparently then chose a more kinetic approach to conflict management. According to the sources,

Kuczwanski rammed his BMW into the Prius on the driver’s door, and began pushing the car sideways in the parking lot.

Kuczwanski then shot a gun at the white Prius, according to the sources. The Prius driver drew a gun and fired back into the windshield of Kuczwanski’s BMW. Kuczwanski was hit and killed.

The Prius driver got the hell out of his car on the passenger side and hid behind the car, unsure whether the maniac in the BMW would keep shooting at him.

A press release from the Leon County Sheriff's Office didn't assign responsibility for the incident, but it did say that when deputies (we still can't rule out whether they were deathbots) arrived on the scene, they found Kuczwanski "with life-threatening injuries," and with paramedics, attempted to save his life. He was pronounced dead at a local hospital.

Now, we'll also note that the Orlando Sentinel reports that Rebekah Kuczwanski, his widow, contended on Twitter that "John was the victim and lost his life. His family deserves time to heal and privacy. Why not report the shooter’s name? The man who assassinated him?"

We couldn't find her assertions in the Twitter thread that Florida Politics linked to, but it sure doesn't sound like she claimed she witnessed the incident firsthand:

“He was on his way home early to pick us up for a farewell dinner for our daughter,” she wrote. “He called to say he was on his way to beat traffic. He was excited for dinner and to see us. He told us he loved us then never came home.”

We certainly understand and respect Ms. Kuczwanski's grief, and yes, the incident is still being investigated, but neither the Sentinel nor the few other reports we've seen (based largely on the Florida Politics story) seem to report anyone else accusing the Prius driver, who was arrested at the scene but released later without being charged.

As we noted up top, according to Leon County court records, Kuczwanski had been arrested in 2014 at the same intersection for an earlier incident of road raging. We'll go with the WCTV summary of that 2014 incident here:

Arrest papers show a driver complained that a man in a red F150 pick up pointed a gun with a laser site at him while the two were at the intersection of Thomasville and Bannerman Roads.

According to arrest papers, the driver gave deputies the tag number and when they arrived at Kuczwanski’s home just a few miles away, he told deputies the other car had cut him off in traffic.

Kuczwanski pleaded no contest to reduced charges — assault and disorderly conduct — and was sentenced to probation, community service, and anger management classes, which we suppose didn't take. Tallahassee Reports says that while he was serving that sentence, he was not allowed to have firearms, but he completed probation in 2018. Presumably he didn't waste any time rearming himself, because in Florida, you never know when somebody might try to assassinate you.

Also too, the final thing Kuczwanski posted to his Twitter account appears to have been an automated tweet that went out in December when he entered a contest to both win an expensive handgun and to prove that you can't make this shit up: 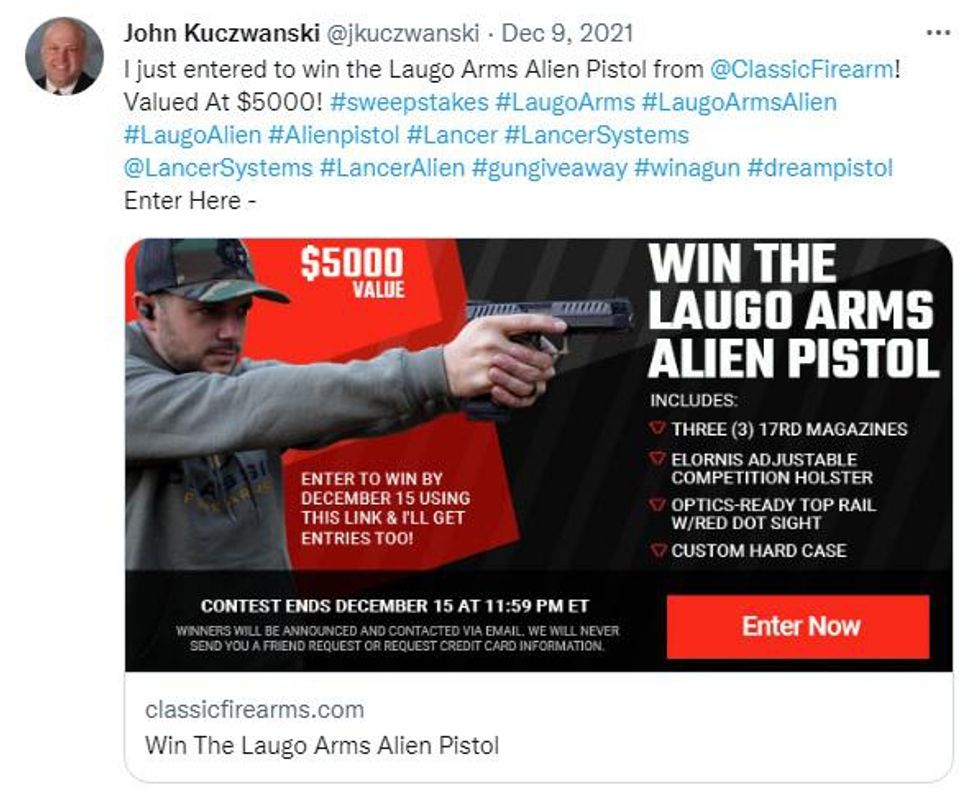 It would appear that "He won a fancy pistol in an online contest" will be another thing they don't say about him, man.

PS: While we understand the Freude of the Schaden of going around and coming around, especially when it's psycho bullies endangering us all, we remind you to stick to the rules regardless, because we are No Fun.

Yr Wonkette is supported entirely by reader donations. If you can, please give 45 or $10 a month to help us keep bringing you all the weird shit that's out there, man.