The gang over at "Fox & Friends" has finally crossed the inevitable threshold into the not-especially-wide world of survivalist food buckets. Following in the footsteps of such luminaries as Alex Jones and Jim Bakker, they are now pushing people to buy giant buckets of freeze-dried food in preparation for the end times. Well, not the end times, exactly, but rather for all the natural disasters suddenly happening for absolutely no reason they can think of, except maybe God is mad at gay men or feminists (definitely not climate change).

Or for when there is no food on any shelves anywhere because Joe Biden screwed up the supply chain by inventing COVID-19 and not forcing people to work for low wages or (ideally) no money at all.

Definitely not for a pandemic though. Those aren't real.

RACHEL CAMPOS-DUFFY (CO-HOST): And with natural disasters striking unexpectedly, we're going to show you the gadgets that you'll need to keep your family and and your pets safe.

WILL CAIN (CO-HOST): All right, so here for day two of our always be prepared series, home improvement and lifestyle expert Skip Bedell. Skip, get us prepped.

SKIP BEDELL (TELEVISION PERSONALITY): Guys, we're back. And you know, food obviously is really important. Especially for me, because I like to eat. So, supply chains, we've seen empty shelves in grocery stores, maybe for the first time ever. This is Readywise food. So they make emergency food supply buckets. They have a 25-year shelf life. So you can store these in your home. They have delicious food, really nutritious, gluten-free, organic. They have breakfast, they have dinner buckets.

CAMPOS-DUFFY: You said the mac and cheese is really good.

BEDELL: Mac and cheese is amazing, meat buckets with, like, protein. So what's great about this is really delicious food, and all you have to do is add water. Twenty-five-year shelf life. And I got to tell you, my wife and I actually eat -- we just sometimes eat it, and it's so good. It's not only just for emergency. It's really good.

JANICE DEAN (CO-HOST): As somebody that doesn't cook, I would definitely dig into these.

I think what I like best is the "We're seeing empty shelves in grocery stores, maybe for the first time ever" as if we all did not just live through 2020 a year ago.

The food buckets they are promoting (which conveniently are also pushed on Skip Bedell's website) are made by a company called Readywise, which used to be called the Wise Company (not like the potato chips). It previously lost a major class action lawsuit alleging that its food buckets did not provide anywhere near as much food as the company claimed, and that the actual nutritional value of the food was vastly overstated. In other words, the food was terrible, and in such small portions.

Unbeknownst to Plaintiffs and other consumers, Wise Company's long-term and emergency food kits provide less than half the daily calories necessary for an average adult to survive. Consequently, a person who credits Wise Company's representations and attempts to survive on one of its "Long-Term Food Kits" for the specified period of time faces serious physical and mental health risks, including dehydration, hypothermia, hypotension, impaired renal and liver function, depression, and impaired cognition. Wise Company, which holds itself out as an expert in survival preparedness, misrepresents that its Long-Term Food Kits will healthily sustain an adult for the advertised period of time, and never discloses to consumers that eating the number of servings necessary to make its food kits last for the advertised period of time will result in adverse consequences.

There was also a bit of a scandal when several conspiracy and prepper sites alleged that, as part of the class action settlement, the company gave its customers' names and information to the government.

While there's no proof this actually happened, and the story appears to have originated on a site called "The Daily Sheeple" (which is apparently so sketchy my browser won't even go there), such an allegation is devastating for a company whose entire customer base is pretty much made up of conspiracy theorists and preppers.

The buckets currently cost from $559 to over $10,000, depending on how long you plan on surviving the apocalypse for. 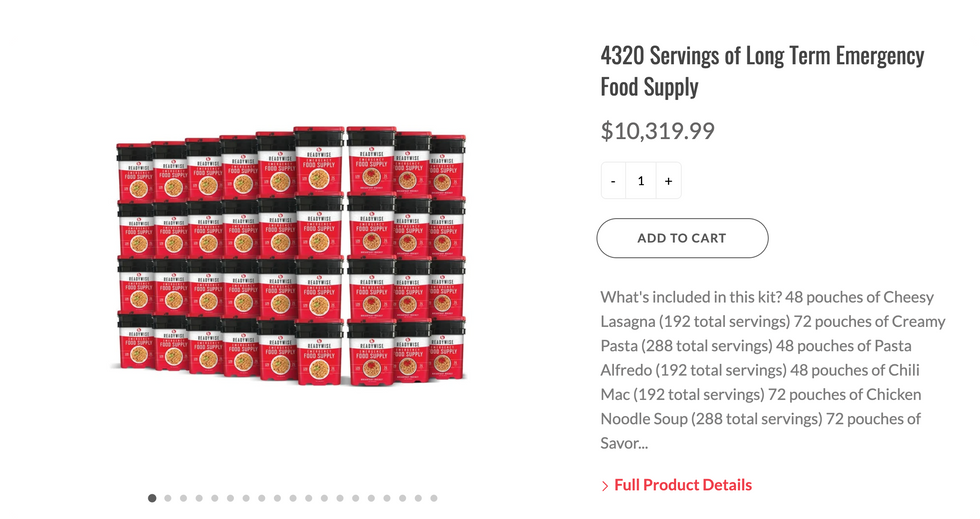 Leave it to Fox to sell people super-expensive food buckets from a company previously known to not actually put much food in said food buckets, in hopes of sort of maybe owning Joe Biden over a thing he is clearly not at fault for!