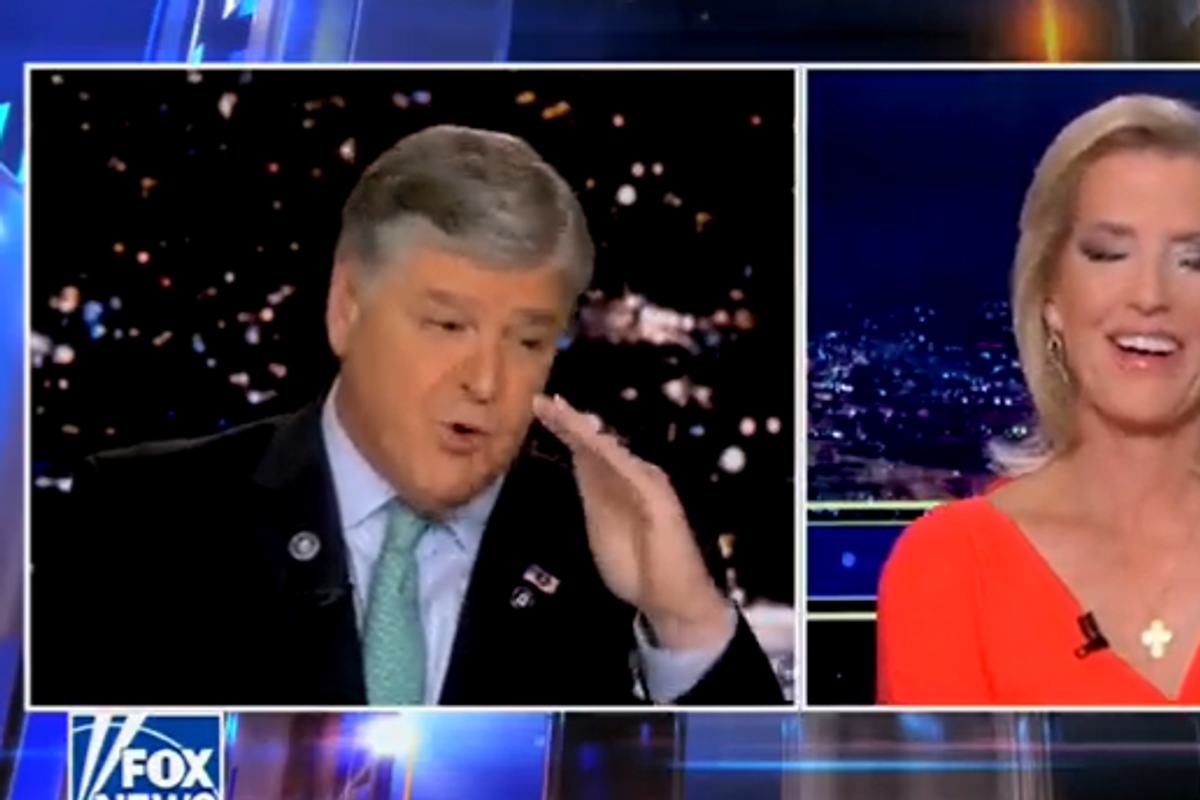 Hooray! The Fox News network announced last night that its opinion pundit hosts Sean Hannity and Laura Ingraham would deign to address their filthy gullible audiences about why they were sending text messages to Donald Trump's chief of staff Mark Meadows on January 6, begging him to call off the insurrection attack he started. It was weird when we found out about that, considering how those two and much of the rest of Fox News have spent every day since telling us January 6 was no big deal or Antifa or false flag.

Let's see, is it this thing where Hannity said yesterday that "there were people that had staged certain things" on January 6? No, that was him on his radio show, that wasn't about texts. He did start to get closer on the radio, though, to tell us how MAD he was:

The idea that I had sent a text to Mark Meadows that day on — on January 6th and everybody in the mob and the media, Lynda, have you been watching the hysteria?

Oh this is some babbling.

HANNITY: I thought we had — I thought liberals believed in privacy in this country. Just like when we talk about COVID, I think I'm one of the few remaining Americans that believes in freedom, you know, not out there saying, "F your freedom" like other people. I mean, it's like every other day I hear somebody new saying, "F your freedom." I'm like, "Nah, sorry, that's not the country I believe in, or the people." Yeah, I mean, it's just people, just bizarre.

The country that I believe in — I believe in medical privacy. I believe in doctor patient confidentiality. You know, nobody wants to hear it, but I think I'm right. I think the debate, for the most part, is over in terms. People have decided where they stand on vaccinations. And I don't think anything that Kamala Harris, Joe Biden, Anthony Fauci, the CDC or the NIH is going to say that's going to convince them and we'll get to that later in the show today.

And the fact that, you know, they read a test — a text from me, "Can he make a statement, ask the people leave the Capitol?" OK, now why would they release this, except that they're trying to make a point?

Poor Sean Hannity! Won't somebody think of his CONFIDENTIALITY, about his vaccinations and whoever he's texting on the Trump team who's currently complicit in an attempt to overthrow democracy?

But again, that was just on the radio. The real fun started after dark, hahaha gross, Sean Hannity after dark.

Hannity's excuses began here, with the handoff between Tucker Carlson and him, where they both argued that ACTUALLY what Sean Hannity said on January 6 in texts was exactly what he said on the radio and TV that day. Tucker said Hannity "sounded in that text exactly like you sounded on television, and that's just true." And Hannity was like yep, that is the truth!

Hannity: "Thank you for reaching out and asking 'What did I say?' Because nobody else in the media did."\n\nTucker: Yeah, I did! I called you this morning. I wanted to know what that was about. And you sounded in that text exactly like you sounded on television!"pic.twitter.com/IIfo9K0FuY
— Justin Baragona (@Justin Baragona) 1639533998

To be absolutely fair, while it's true that Hannity was begging Meadows to get Trump to call off his attackers from the Capitol, which means he understood that Trump was the one who made this happen, his texts to Meadows were the chillest of all those Liz Cheney read into the record. So if his argument is that he was actually the most fine with it, then ...

Of course, within minutes, Hannty had landed with blaming Nancy Pelosi. Then he lied and acted like he wasn't insinuating that Antifa had helped stage the attack that day, and whined and bitched some more about his private texts being leaked.

Hannity lies, says, "I said to Mark Meadows the exact same thing I was saying live on the radio at that time and on TV that night, on January 6." Hannity urged Trump to do something about the Capitol attack in his texts and then went on radio/TV and blamed antifa.pic.twitter.com/v8wLn8wuj5
— Aaron Rupar (@Aaron Rupar) 1639534579

"Where is the outrage in the media over my private text messages being released again publicly?" We guess he means "again" because of how we read all his texts with Paul Manafort.

So that was what was really important, we guess.

Later Geraldo Rivera tried to bring some truth to the affair, saying January 6 was a "riot that was unleashed, incited and inspired by the president of the United States," at which point Hannity started bitching and moaning and cutting him off, because the REAL ISSUE is how the January 6 Committee is mean and released his dumbfuck text messages. Rivera asked him to think about those fucking texts for a minute, and Ingraham's texts. Hannity did not want that. He wanted to lie some more about what happened on January 6.

Geraldo to Sean Hannity: "I beg you, Sean, to remember the frame of mind you weren\u2019t when you wrote that text on January 6. And when Laura did. And when Brian did. And when Don Jr. did!"\n\nDan Bongino reacts by blasting Geraldo for "backstabbing" Trump.pic.twitter.com/YSPYfBwAf4
— Justin Baragona (@Justin Baragona) 1639535719

Make sure to stay for Dan Bongino's Little Man Syndrome whining at Geraldo at the end of that clip, it's pretty funny.

So that's what happened on "Hannity."

Here's the handoff between the two idiots Hannity and Ingraham:

While Hannity led off by addressing the texts, Laura Ingraham gonna make us all wait so we will stay tuned into her show.pic.twitter.com/gacwXjj8KR
— Justin Baragona (@Justin Baragona) 1639537736

They are so, so mad. In the handoff, Hannity whined about his private texts some more, then Ingraham said that later in her show she was going to say what's REALLY going on with LIZ CHENEY and the MEDIA and how she doesn't want to read THEIR text messages because they are BORING. Also she explained to Hannity that she doesn't like the word SUCKS and now she has to do her SHOW so GOODBYE, Sean HANNITY.

Once she got around to it, Ingraham made pretty clear that she really doesn't want us focusing on how, on January 6, she was spreading "just asking questions" conspiracy theories about how Antifa was doing the Capitol attack, even as she was texting Mark Meadows like AAAAAIYYYEEEEEEEEEE! As if any serious person was making that allegation about Antifa. As if any serious person was making the allegation that the election had been stolen from Donald Trump, for that matter. Fuck off.

Ingraham makes it sound as though she at some point confirmed on her show that antifa was not responsible for the January 6 attack on the Capitol. I don't think that ever happened.pic.twitter.com/kNCLSnWl7h
— Aaron Rupar (@Aaron Rupar) 1639538879

Here is all you REALLY need to hear from Laura Ingraham's garbage shitmouth response, which is truly as flippant as this tweet makes it out to be. In the exact same breath, she says she wasn't downplaying it that day, and then that there was no insurrection.

Ingraham: Does that sound like I was downplaying it to you?\nMoments later: It was not an insurrectionpic.twitter.com/LO8irH5AA9
— Acyn (@Acyn) 1639539182

By the way, the full House voted to hold Mark Meadows in contempt of Congress last night.

That's what happens whne you fuck around and find out, we guess.