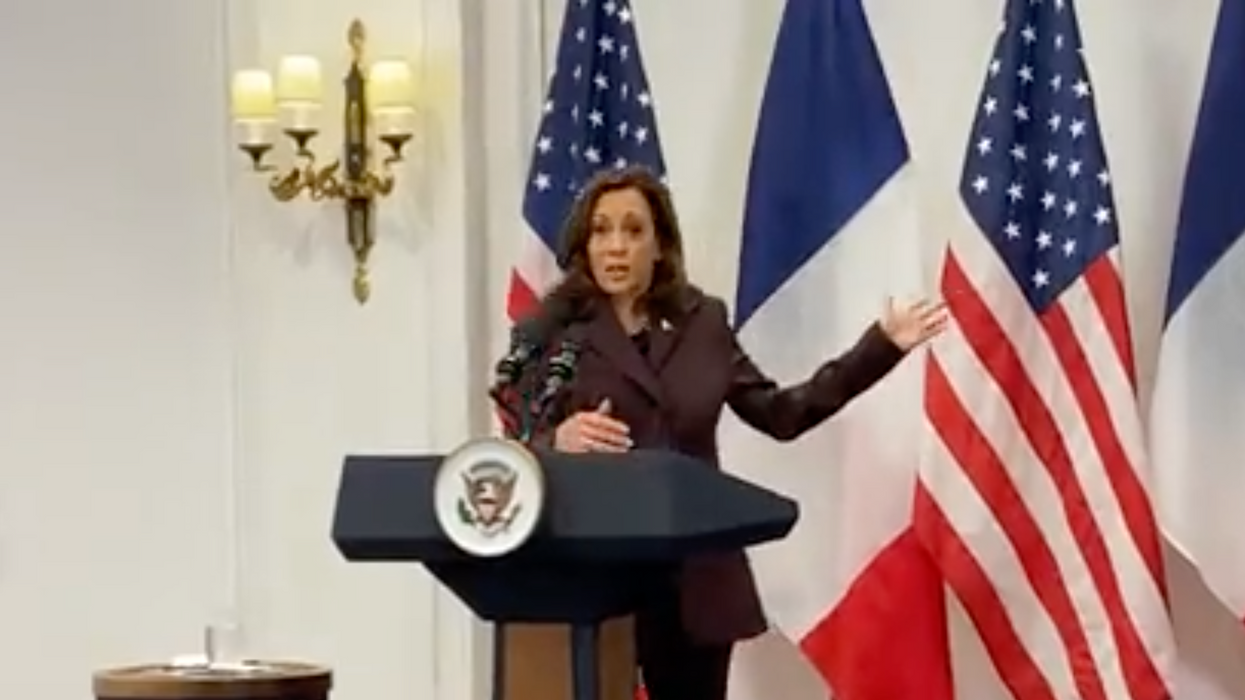 During the Trump administration, it was one exhausting scandal after another. We never had to stretch a scandal out for more than a day and we never had to struggle to turn a non-story into a story — not that that's our jam anyway. It is, however, very much the jam of Fox News and other right-wing networks and websites. We all recall the Obama years, during which conservative commentators would frequently spend a whole month talking about how he ordered Grey Poupon or wore a tan suit somewhere.

Now they are trying again, desperately, to make scandals out of anything Joe Biden and Kamala Harris do, after pretending there was nothing wrong with any of the completely absurd shit Trump got up to during his tenure. As such, conservative commentators have spent the last several days blowing their gaskets over Kamala Harris supposedly slipping into a French accent during two separate public appearances in France.

Their evidence? She pronounced "the" as "thee" instead of "tha," as a means of emphasizing things she was talking about. This is a thing English-speaking people do all of the time and also sounds nothing at all like a French accent.

The @VP again used the "thee" pronunciation for the word "the" when making a point. Some critics have claimed she appeared to adopt "a fake French accent" when she said "the plan" during a tour of a research lab on Tuesday. Today at Paris press conference, she said "the topic."pic.twitter.com/v54sLW3LZr

Former Bush press secretary Ari Fleischer, appearing on The Faulkner Focus insisted that she was definitely trying to speak French by speaking English in a French accent, suggested that it was weird and she should not do things that are weird because she's not popular enough?

I love the French language. But that was weird. If you can't speak French, don't try. So I really – maybe she was trying to be in touch. I can't explain it. … I don't want to overstate it. I don't think it was that dramatic moment, but it was just weird. It was odd.

Kamala Harris could throw on a beret and start singing Je Ne Regrette Rien in the style of Edith Piaf and it would not come anywhere close to anything Trump did, insofar as weirdness is concerned.

Additionally, should anyone from the Bush administration be coming at anyone for pronouncing a word differently? I mean ... starting with "Rarely is the question asked: Is our children learning?" and "Too many OB/GYNs aren't able to practice their love with women all across the country," "nucular" and moving forward.

In another segment, this time on Hannity, Mike Pompeo — former Secretary of State for the Trump administration Mike Pompeo — also had the gall to claim that Harris saying "thee" instead of "the" is "embarrassing on the world stage."

Boy, Sean, where to begin? The clip from Vice President Harris is just it's more than embarrassing on the world stage … Our adversaries watch that and see weakness. They see people who aren't serious, they see people who aren't determined precisely the opposite of what we did for four years. It feels a lot more like the Carter administration in terms of how they view America as a danger to the world and apologize everywhere they go.

And let me just remind you of what happened when Trump went to France for the 100th anniversary of the First World War.

Via The Daily Beast:

Clearly upset about the disastrous trip—which included having his idea of "nationalism" criticized to his face by French President Emmanuel Macron—Trump went on the offensive Tuesday morning. He mocked Macron's approval rating and France's unemployment rate, and criticized the tariffs it charges for French wine. But in the comment most likely to upset the French and all veterans, he ridiculed its losses in the World Wars. "Emmanuel Macron suggests [the EU] building its own army to protect Europe against the U.S., China and Russia," he wrote. "But it was Germany in World Wars One & Two - How did that work out for France? They were starting to learn German in Paris before the U.S. came along. Pay for NATO or not!" He also dubiously added that the reason he couldn't attend a remembrance service in France—which was initially explained away as being due to bad weather—was that "zero visibility" meant his helicopter couldn't fly—an explanation which many have doubted to be true.

Honestly, it's pretty clear that what all of these people are mad about is the fact that this trip and a lot of others are a little bit about apologizing to other countries for Trump and reestablishing friendly relations with our allies.

Even if Harris did, for some reason, accidentally slip into a French accent for a second — which actually would not be an impossibility when you have been in France and speaking French for days — what is it they imagine her nefarious plan for that would even be? Like, she's gonna just start casually dipping into a French accent more and more until she fully morphs into Maurice Chevalier?

Oh! Or are they afraid that she is secretly French? Like she is a double agent ... for France?

As an aside — I happen to think we need to rid ourselves of this assumption that people who slip into accents when they are around other people with that accent are doing so because they are pretentious and want to pretend to have that accent. Hilaria Baldwin nonsense aside, a lot of people are just natural mimics. I am one of those people (my sister is even worse). The longer I am around people with a particular accent, the more likely I am to pick it up. Hell, I watch BBC mysteries for too long and Brenda Blethyn starts narrating my inner monologue.

I am telling you, every time people talk about Madonna's fake English accent or Lindsay Lohan's Who Knows What It Is accent, I want die in my face because I know it could be me.

The fact is, every time I have ever brought this up on social media or elsewhere, 40 people have come out of the woodwork and said that they too have this issue. It's not uncommon and it's much more fun to laugh about than laugh at. We all do weird shit and we're all just trying our best to talk to other human beings without doing something that makes us want to die of embarrassment.