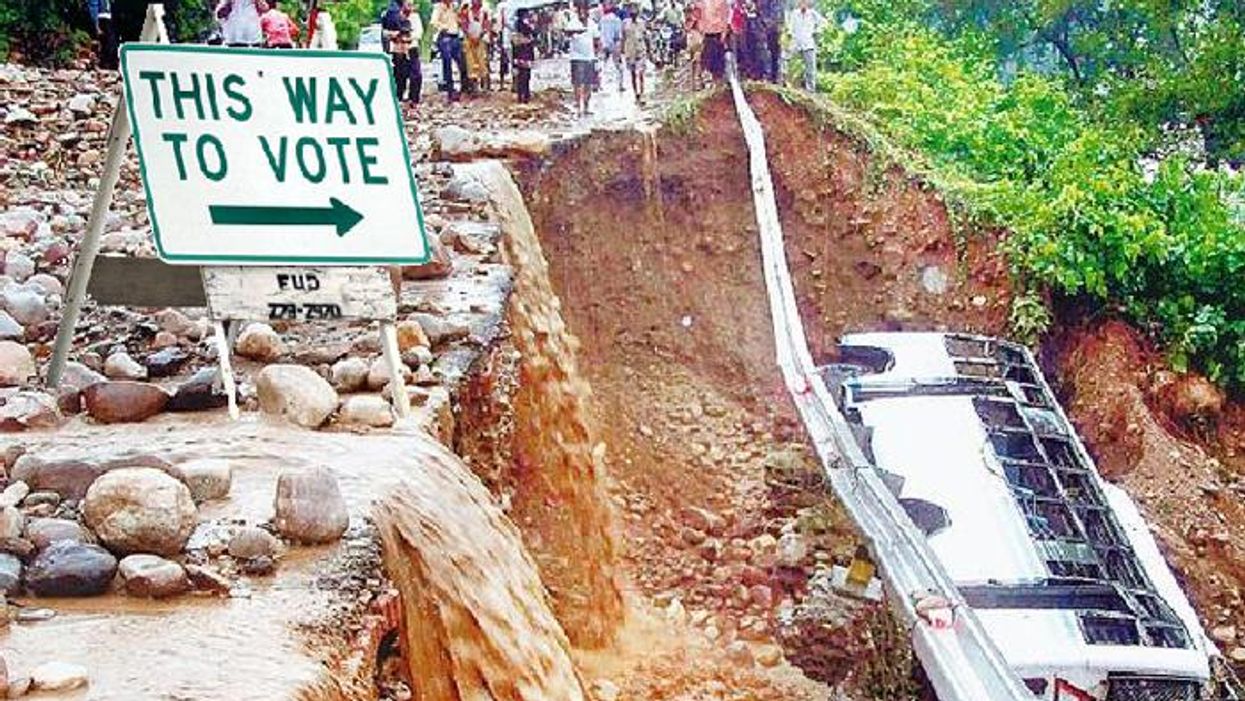 One of the most egregious parts of the restrictive new voting law passed in Georgia last year was a provision allowing the state Legislature to replace members of local elections boards the Lege considered to be "underperforming," although what that means isn't very well defined.

The Georgia Lege quickly got to business making such replacements in six counties, with the effect of removing Black Democrats and installing Republicans instead, to make the boards better. Now one of the boards that got reorganized, in Lincoln County, is planning to eliminate all seven polling places in the rural county and replace them with one big central voting location in the county seat, which is imaginatively named "Lincolnton." That means some residents will have to walk or drive at least 15 miles to vote, and others even farther, the Atlanta Journal-Constitution reports.

Oh yes, there's also no public transportation in Lincoln County, as well as no taxis or Uber or Lyft. Not even a place to rent a Lincoln; the major rental places are all in Augusta.

But don't you worry about how this will affect the ability of Lincoln County voters to get to the polls! The new, consolidated voting site will be much bigger and better, Lincoln County Elections Director Lilvender Bolton explained, and also much safer, you see:

“We really don’t have room in some of our facilities to do social distancing and to do the things that we need to do to keep my poll workers safe,” Bolton said. “We will be able to set up 30 or 40 voting machines, whatever we need.”

If a Georgia Republican worrying about "social distancing" and the safety of poll workers sounds a little weird to you, it might be because previous efforts to reduce the number of polling places were also pursued under a similar pretext. In 2018, the Republican-dominated elections board in Georgia's Randolph County wanted to close three-quarters of the polling places in that mostly Black county prior to the general election. The board insisted the locations weren't in compliance with the Americans with Disabilities Act, even though the locations had been used in the primary elections that year. After a national outcry, the Journal-Constitution notes, the county ended up only closing three polling places, in mostly white areas, even!

This year, in Lincoln County, Bolton claimed nobody would be inconvenienced at all, because a bit over half of county residents vote during early voting, although we'd point out to him that they did that in seven locations that may be a lot closer to them than the proposed consolidated site.

Still, even if the county's population is mostly white and Republican, those who aren't white and Republican have votes that matter in statewide elections too; Georgia may have noticed that recently. And who in that county is more likely to be run off from voting because they don't have a car?

Anyone who wants to vote would have to drive or walk to a polling place, or return an absentee ballot. Turnout decreases when voters have to travel farther to cast a ballot, according to a statistical analysis by The Atlanta Journal-Constitution.

As you'd expect, voting rights people are plenty pissed about this, because why not just let people vote? Denise Freeman, a voting rights activist and former Lincoln County school board member, told the Augusta Chronicle,

Lincoln County is a very rural county. Some people live as far as 23 miles from the city of Lincolnton. [...] This is not about convenience for the citizens. This is about control. This is about the good old boys wanting to do what they’ve always done, which is power and control.

Gosh, she sure sounds cynical about a really great idea to make voting more efficient for Republicans who can manage to travel much farther to the polls. Besides, doesn't she care about the pandemic?

The Lincoln County elections board could vote as early as January 19 on the proposal.

Yr Wonkette is funded entirely by reader donations. if you can, please help out with a monthly $5 or $10 donation so we can keep the bastards honest. Hahaha, the bastards are never going to be honest, they are bastards!