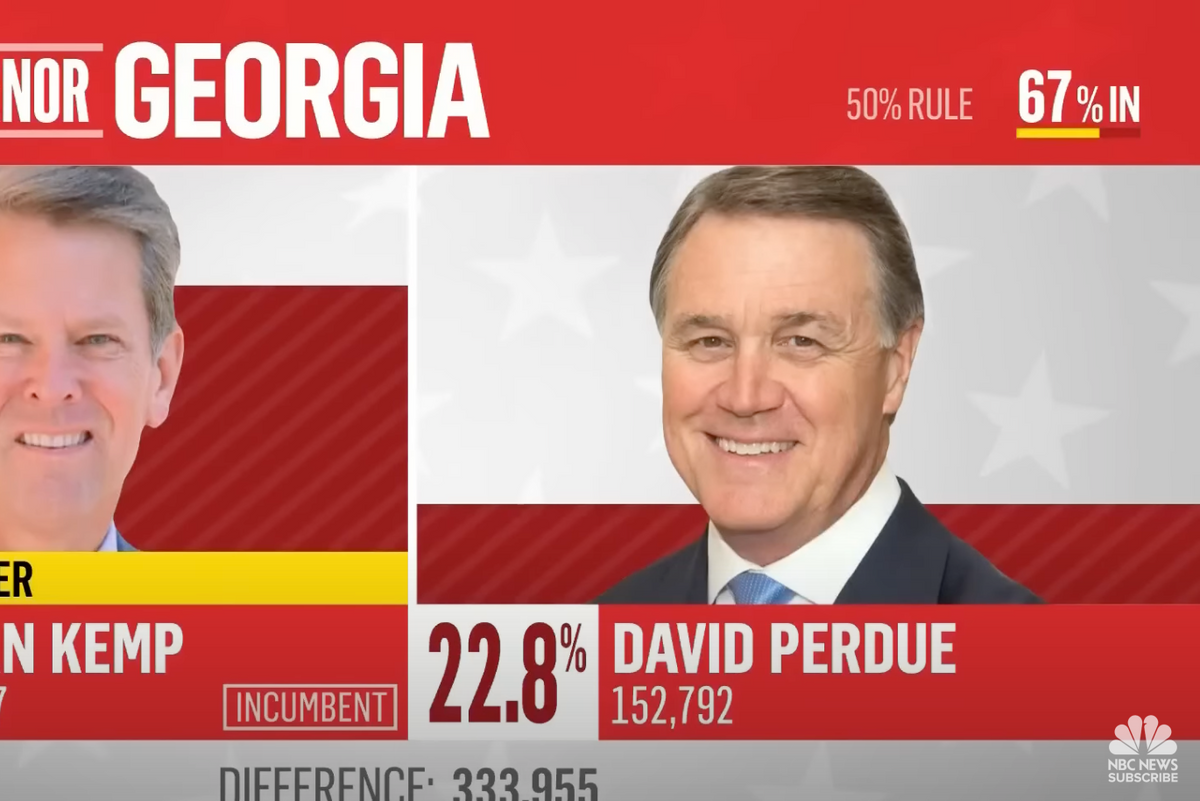 Donald Trump did not have a great night in Georgia.

His hand-picked instrument for petty revenge, David Perdue, was absolutely crushed in the GOP primary against incumbent Gov. Brian Kemp, whom Trump loathes. The Democratic primary for governor was more competitive and Stacey Abrams ran unopposed. The polls had barely closed before Dave Wasserman at Cook Political Report had seen enough.

This was Perdue's second-annual election loss. The former senator lost the 2021 Georgia runoff to Jon Ossoff but could’ve kept his dignity. Instead, he agreed to help Trump unseat Kemp and GOP voters soundly rejected him. Kemp swept every county and took 73.7 percent of the vote. Perdue limped home with a pathetic 21.8 percent, worse than anyone predicted.

Last week, Perdue “guaran-damn-teed” he wasn’t losing by 30 points, as final polls indicated, and he was right. He lost by 50. Perdue closed out his offensive, racist campaign with a racist attack against Stacey Abrams, who he claimed “demeaned her own race.” His public humiliation was a joy to witness.

The obituaries for Perdue’s political career all focus on his foolish choice to challenge a sitting governor with deep connections in the state. According to Politico’s recap of the bloodletting, Kemp’s campaign went “fucking scorched earth” and "methodically dismantled” Perdue’s political operation. He had no money, no hope, just Trump’s lies and his putrid bigotry. Not a single Georgia Republican wants to admit having mildly encouraged Perdue’s folly.

“I personally have not talked to anybody in this state who encouraged him to [run]. Everybody I know tried to stop him when the rumors started circulating. I do not think anybody thought it was a good idea for him to run against the governor,” said Savannah-based GOP donor Kevin “Catfish” Jackson, a past Perdue Senate campaign donor who backed Kemp.

He should’ve listened to “Catfish."

That racist bastard Perdue isn’t even the star of his own massacre. Politico’s headline read: "How Brian Kemp Crushed Trump In Georgia.” If you count all the 2020 recounts, this makes the fourth time Trump has lost Georgia.

Kemp and Raffensperger are Republicans, so they’re terrible, but if they win their elections this year, Biden still has a chance to win his in 2024 without the results being overturned.

A minor bright spot for Trump is that Herschel Walker easily won his Senate primary. However, that race wasn’t a stop on the Vendetta Tour, and it’s obvious Walker’s victory had more to do with his own celebrity than Trump’s influence over Georgia voters.

Walker defeated five other candidates who now must go through life having lost an election to Herschel Walker. Gary Black, Georgia’s commissioner of agriculture, came in a distant second with 13.4 percent of the vote to Walker’s 68.2 percent. Black ran an ad where he clumsily put on a football uniform and tossed a football to himself. Reminding voters you’re a geek just doesn’t win elections down South.

Walker poses a serious threat to incumbent Democratic Sen. Raphael Warnock. It’s a tough election year for Democrats, and Warnock previously defeated Kelly Loeffler, who has the personal appeal of ringworm. We can’t underestimate whatever it is that passes for Walker’s charm.

Yes, Walker’s a fucking moron, but this isn’t the "West Wing" where that might factor negatively in a Republican’s campaign. At his victory party, Walker was asked about new gun laws after the Texas school massacre. The Russian roulette expert responded: “What I like to do is see it and everything and stuff.”

We can’t let Raphael Warnock lose to this fool. He’s a man of God.