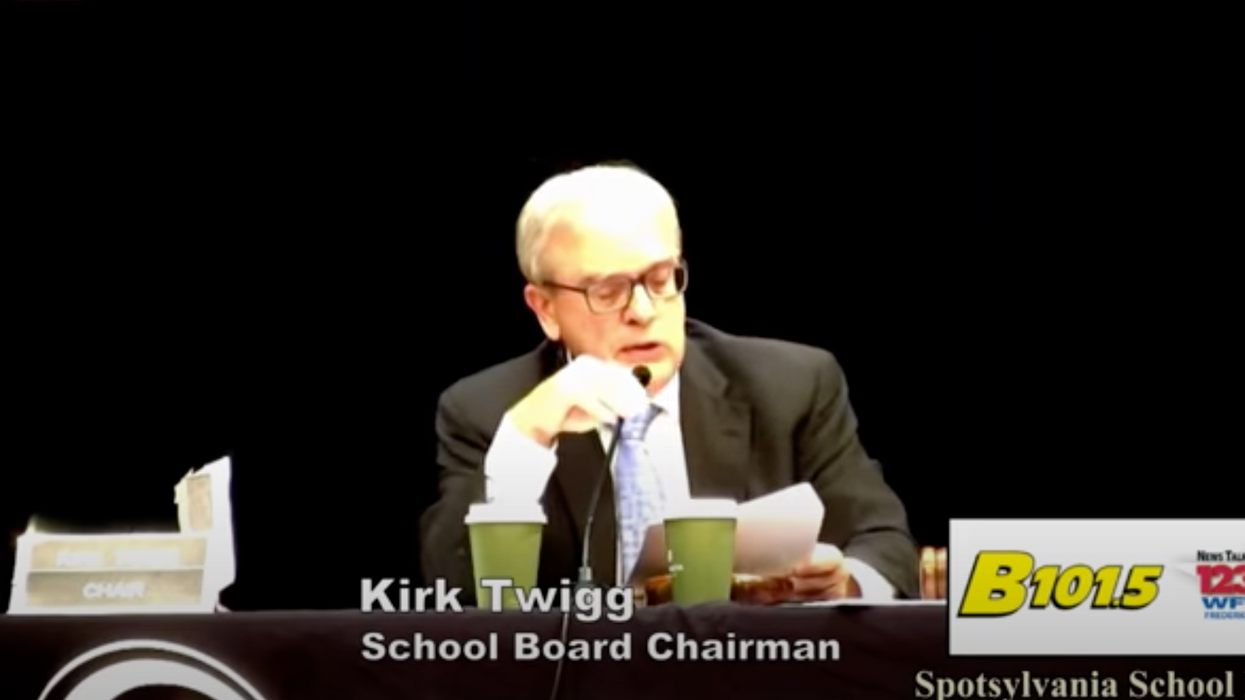 Incoming Virginia Governor Glenn Youngkin — he'll be inaugurated Saturday — rode a wave of school board madness to electoral victory in November. Now the situation’s only getting worse. Monday, during its first meeting of the new year, the Spotsylvania County School Board elected Livingston District member Kirk Twigg as the new chair. This is the pleasant man who wasn’t satisfied when the school board voted unanimously a few months ago to have books with “sexually explicit” material removed from school library shelves. No, he wanted them literally burned.

IT'S THIS GUY. WELL, ONE OF THESE GUYS: One Week After Virginia Elections And School Board Members Want To Burn Books

We quote in full Goebbels: “I’m sure we’ve got hundreds of people out there that would like to see those books before we burn them,” [Twigg said.] “Just so we can identify, within our community, that we are eradicating this bad stuff.”

Outgoing chair Dawn Shelley tried to explain why elevating Twigg was a terrible idea: "He has spoken about confidential [human resources] matters in open session. He is constantly using his AOL account to send and read emails throughout school board meetings. He wants to burn books.”

What kind of a fiend are we dealing with? Someone who still has an AOL email account is capable of anything.

You'll notice in the above video that Twigg doesn’t bother wearing a mask during the meeting, which is indoors. That indicates how much he respect he has for his fellow board members.

Conservatives now have a majority on the board, and the new chair’s first move was to deliver on his mad dream of firing superintendent Dr. Scott Baker, who was well-regarded before the critical race monsters showed up on Maple Street. Presumably, Dr. Baker ties down children and reads them scarier passages from Beloved. Or he just acts like a normal person on a school board. Either way, he’s out.

Given how bonkers things have gotten lately, Dr. Baker had already agreed to leave voluntarily at the end of 2022, but Twigg called an impromptu closed-door session, after which the board voted 4-3 to fire Dr. Baker without cause. That might’ve have been illegal, and the closed-door session itself possibly violated Virginia’s open meeting requirements. Twigg was off to a great start, and reasonable board members noted that Twigg offered no immediate plan to replace the superintendent, who was callously escorted out of the building. Nicole Cole, a member from the Battlefield District, said:

I believe that the board members who have lodged this termination owe our citizens and our students of Spotsylvania County a justification for firing Dr. Baker. You have not stated any justification or ability to fill the position. How is this good for the students, the children of Spotsylvania? How does this make sense?

Cole added that Twigg "couldn't even properly chair a meeting,” which is kind of badass. Twigg was reportedly unaware of basic procedures such as calling a motion and a vote. This is why you should read books instead of burning them.

The meeting was like a wrestling match except no one was acting. Twigg appeared impatient to take Shelley’s seat, and she wasn’t in a hurry to give it to him. This was not a cordial passing of the torch.

One parent present for Monday’s debacle complained about how the meetings have degenerated, thanks in large part to Twigg.

"It has been that way for several months. In this moment people are trying to shout me down, so I think people should be aware that that’s happening," she said.

The parent suggested that total chaos might be Twigg’s ultimate goal. That’s not encouraging, because the last thing anyone needs is the Joker as school board chair.