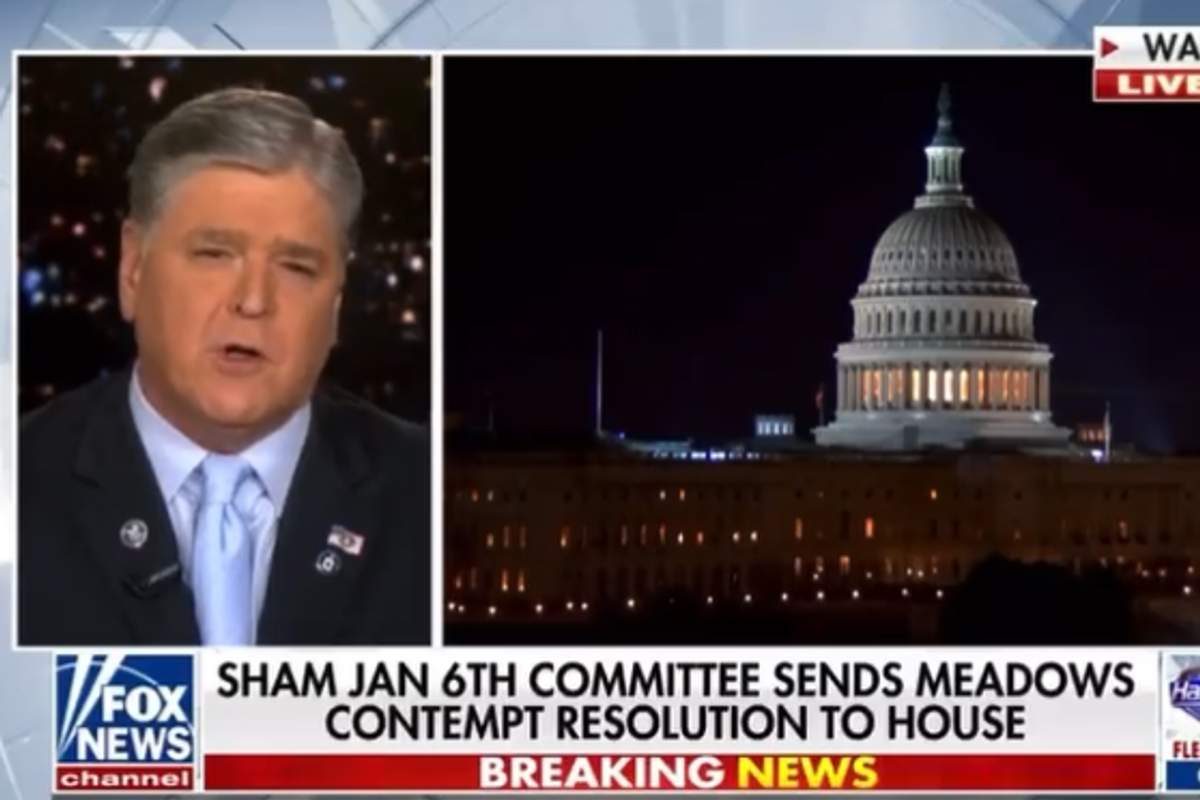 You might have heard by now that, before the House January 6 Select Committee voted unanimously to refer former Trump chief of staff Mark Meadows to the full House for criminal contempt, GOP Rep. Liz Cheney read off text messages people sent Meadows the day of the Donald Trump-inspired terrorist attack.

Everybody was texting Meadows, it seemed, including Fox News hosts who sounded far more frantic that day then you might expect, judging by the months they've spent downplaying the attack. Even Donald Trump Jr. was texting Meadows to beg him to get Daddy to stop. Maybe he's not allowed to have Daddy's real phone number. (You know how it is when fathers pretty clearly don't love their sons.)

Here, have a video of Cheney reading off texts:

Liz Cheney reads texts from Laura Ingraham, Sean Hannity, Brian Kilmeade, and Donald Trump Jr. urging former President Trump to act while he sat around and did nothing for hours during the insurrectionpic.twitter.com/jkk7KhxF0s
— Acyn (@Acyn) 1639441225

Cheney read texts from "multiple Fox News hosts" who "knew the president needed to act immediately," folks like Sean Hannity, Laura Ingraham and Brian Kilmeade. All of them sang a mighty different tune from what we're used to hearing from them. "This is hurting all of us. He is destroying his legacy." That was Laura Ingraham. "Destroying everything you have accomplished," said Brian Kilmeade. "Can he make a statement? Ask people to leave the Capitol." That was Hannity.

"I have a piano recital and a baseball game next weekend," said Junior. "Do you think you could please come to one of them?Please? Is this your real number? Father? Father?" Haha, just fooling, that was not Junior's text, and that random cruelty is not the point of this post. But Junior really did beg his father to do something, through an intermediary. And as Cheney pointed out, these are the texts Meadows turned over, before he quit cooperating. God knows what else the Select Committee has.

Point is, you might think these Foxers would have something to say for themselves. But nah.

Brian Stelter reported in his newsletter that Fox News didn't air the hearing where Liz Cheney read the Fox News anchors' texts, which happened just before primetime, and Newsmax and One America News didn't either.

This was really remarkable for Hannity, since he had Meadows on as a guest last night. You'd think at some point he might have said, "FULL DISCLOSURE, but my clown ass is part of this drama too. Haha, remember when Michael Cohen fingered me as one of his three clients? Remember all my texts with Paul Manafort? This happens literally all the time, wonder why LOL."

He did seem very Grrrr Argh about the committee referring Meadows for criminal contempt of Congress, though:

He also got mad at Liz Cheney, for SOME unmentioned reason:

"I love how Liz is now partnered with the people that called her father a war criminal, a murderer, and a crook,” Hannity huffed. “Pretty amazing!"

Also pretty amazing was this clip of Meadows telling Hannity how Trump wanted to make sure there was a "safe environment for that kind of assembly" that day, as Fox News accidentally played January 6 riot terrorist footage on the split screen:

During her show, Laura Ingraham didn't mention how on January 6, the same day she was texting Mark Meadows freaking out and begging Trump to call off his insurgents, she was also going on her own network and insinuating that Antifa did it.

Laura Ingraham is on Fox News trying to pin some of the blame for violence at the Capitol on antifapic.twitter.com/ilFjDtdu5J
— Aaron Rupar (@Aaron Rupar) 1609967116

Who else tried to blame it on Antifa? Hannity. Justin Baragona at the Daily Beast reminds us that on the afternoon of the 6th, Hannity told his morons that he "heard these reports" what said Antifas "might even wear MAGA gear" at the Capitol that day:

On his primetime Fox News show that evening, Hannity said it was possible that “bad actors” from the “radical left” had infiltrated the crowd to spark violence.

Since then, the pro-Trump primetime host has actively opposed an independent bipartisan commission to look into the Capitol riots, claiming it would be a “smear campaign against Donald Trump, all Republicans, and Trump supporters everywhere.” Furthermore, he’s also repeatedly insisted—as he did Monday night—that Congress should instead investigate the racial justice protests that were sparked by the George Floyd murder rather than the insurrection.

And then there's Brian Kilmeade. Here are some of the excuses he was making for the terrorists as they were terrorizing:

Kilmeade, after saying he did “not know Trump supporters that have ever demonstrated violence that I know of in a big situation,” then blamed the Russia probe as a key factor in pushing MAGA followers to violence.

“I think this is a culmination of four years of them denying that their president won the election, claiming that the Russians flipped votes, this is four years of investigation, four years of a very frustrated electorate, 75 million that voted,” the Fox & Friends star fumed. “They feel that they have not had their day in court, let alone lost in court.”

Kilmeade's been on the TV this morning, on his idiot show. Anything from him? Sounds like nope!

Many are noting today that what these texts really say is that these cynical shitbag Fox hosts knew exactly what was going on — a domestic terrorist insurrection against the Capitol — and they knew who caused it, and therefore who could shut it down. And yet immediately, in real time, they started telling their viewers an entirely different story, and they haven't stopped telling that story since.

Remember several months ago when the Capitol and DC cops emotionally testified for Congress about the physical and psychological torture they endured that day and in the months afterward, and Laura Ingraham gave them awards for their theatrical performances in front of Congress?

In summary and in conclusion, this is a good tweet.