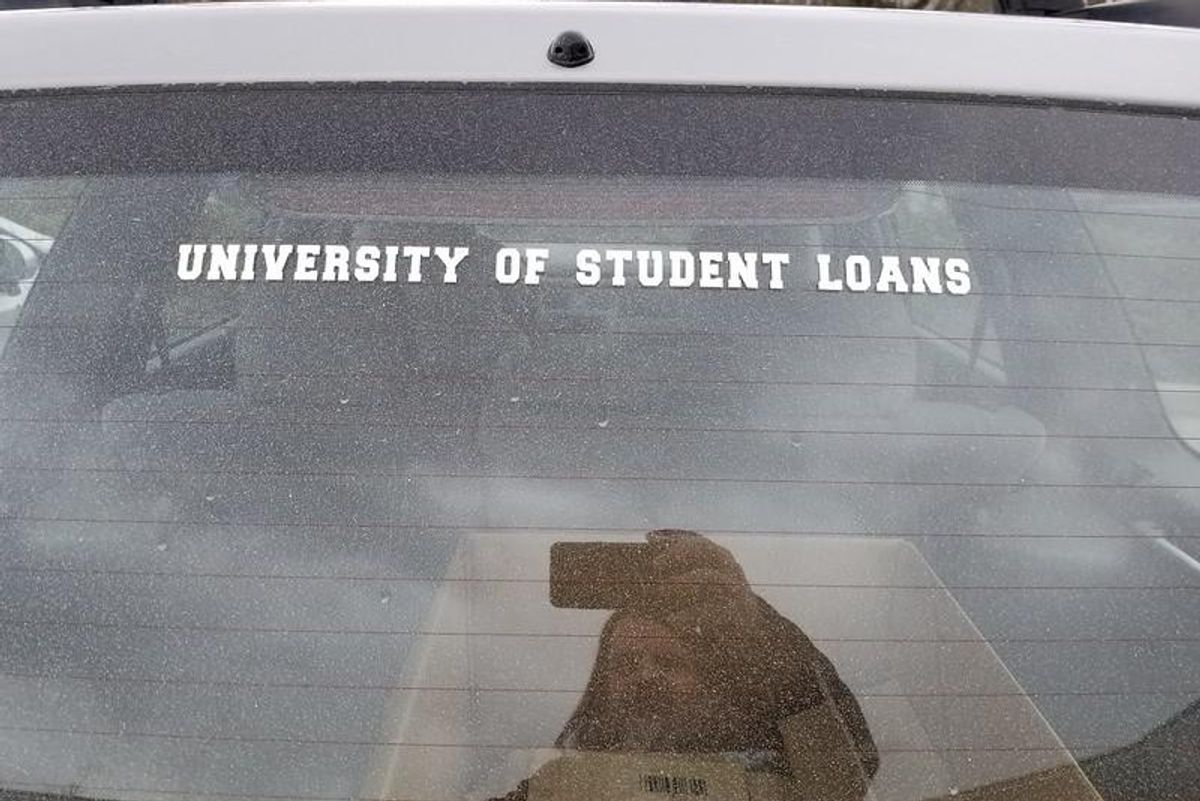 The student loan servicing company Navient, source of disturbing anxiety dreams and night sweats for so many of us with student debt, agreed in a lawsuit settlement this week to cancel $1.7 billion in debt for about 66,000 students who had been talked into taking subprime private loans the company knew they were unlikely to be able to pay, mostly while attending useless for-profit colleges. The crappy loans were issued by Navient's corporate predecessor, Sallie Mae, between 2002 and 2014; Sallie Mae spun off its student loan business as Navient in 2014.

In addition, the company will pay about $95 million in restitution to another 350,000 borrowers to whom its customer support agents recommended only costly loan forbearance plans, instead of much more affordable options like income-based repayment plans. The lawsuit contended that Navient's poor call center drones were actually incentivized to speed up operations, making the forbearances a quick, easy option to process — even though forbearance merely suspends the borrower's payments while interest on the loans keeps building.

Unfortunately, that part of the settlement only works out to about $260 per borrower, not enough to cover a single month of loan payments for most folks. The average monthly student loan payment is about $460, though that varies widely from borrower to borrower.

The deal settles a years-long lawsuit brought against Navient by 39 state attorneys general, and will apply only to folks with loans in those states and in Washington DC. Folks who got similarly ripped off in the 11 states (Texas among them) that didn't join the lawsuit will get bupkis, unfortunately. A separate lawsuit by the federal Consumer Financial Protection Bureau against Navient for deceptive practices is also continuing.

The details of the settlement, which still has to be approved by the US District Court for the Middle District of Pennsylvania, can be found at NavientAGsettlement.com, a site posted by the attorneys general in the lawsuit. Once that approval is final, Navient will contact borrowers whose private loans are being forgiven, or who qualify for the $260 restitution. Qualifying borrowers don't need to do anything, but to make sure they can be found, it's always a good idea for anyone with student debt to make sure your information is up to date at Studentaid.gov.

Insert your own bitter joke here about how they'll always find you if you owe money, but can't seem to locate you if you're due any relief, amirite?

Most of those who took out the loans that will be forgiven under the settlement attended for-profit schools — like the defunct ITT Technical Institute — that often have low graduation rates and poor job-placement records. The private loans were — in Navient’s own words, according to legal filings — a “baited hook” to reel in more federally backed loans.

At some schools, Navient anticipated that more than 90 percent of the loans would default. But what it lost on the private loans was far outweighed by what it gained on the federal loans — guaranteed by the government — that students at those schools took out.

It was a really clever scam — oh yes, here is where we duly note that Navient says the settlement is not an admission of wrongdoing, as scammers always do — to get around the Education Department's rules about federal student aid, especially at nonprofit schools. No more than 90 percent of the schools' total tuition payments could come from federal funding, including programs like the GI Bill, Pell Grants, and federal student loans. According to the lawsuit, Sallie Mae cleverly filled that 10 percent funding gap with the private loans, even though it didn't expect most of them to be repaid, because wow, look at all the federally subsidized loans all those students would apply for.

It was like a Black Friday doorbuster sale, except the customers ended up with tens of thousands of dollars in debt instead of a cheap flatscreen TV and some bruises.

Again, Navient says in a statement that it acted entirely within the law, you betcha, and who are we to satirically suggest anything weaselly happened, in an opinion story that is protected by the First Amendment? Americans have always loved their friendly student loan servicing companies!

“The company’s decision to resolve these matters, which were based on unfounded claims, allows us to avoid the additional burden, expense, time and distraction to prevail in court,” said Navient’s Chief Legal Officer Mark Heleen.

Navient repeatedly and deliberately put profits ahead of its borrowers — it engaged in deceptive and abusive practices, targeted students who it knew would struggle to pay loans back and placed an unfair burden on people trying to improve their lives through education.

The erasure of the private loans will be a huge relief for borrowers who had little hope of paying them, but the Times story also notes that doesn't mean anyone at Navient is likely to be spending sleepless nights worrying about the loss:

[Most] of the debts Navient is agreeing to wipe out are long-overdue loans for which it was already unlikely to be repaid. Navient valued the $1.7 billion it agreed to forgive at just $50 million — the total it expected it would ever be able to recoup, the company said on Thursday in a regulatory filing.

There's also this weird detail, which simply left us staring at the screen in disbelief:

Notably, students who were current on their loans as of June 30, 2021 — meaning they’re still paying their bills — will not have their loans canceled. Representatives for Mr. Shapiro, the Pennsylvania attorney general, did not immediately respond to a question about why those loans were left out of the settlement.

It's almost as if no good deed went down to Georgia, looking for a soul to steal, and got a job in a loan processing company, to coin one of those expressions Evan can never get right.

Yr Wonkette is funded entirely by reader donations. If you can, please give $5 or $10 a month so we can pay our own loans until we're dead and then Navient will follow us into Hell to demand some of our brimstone too.