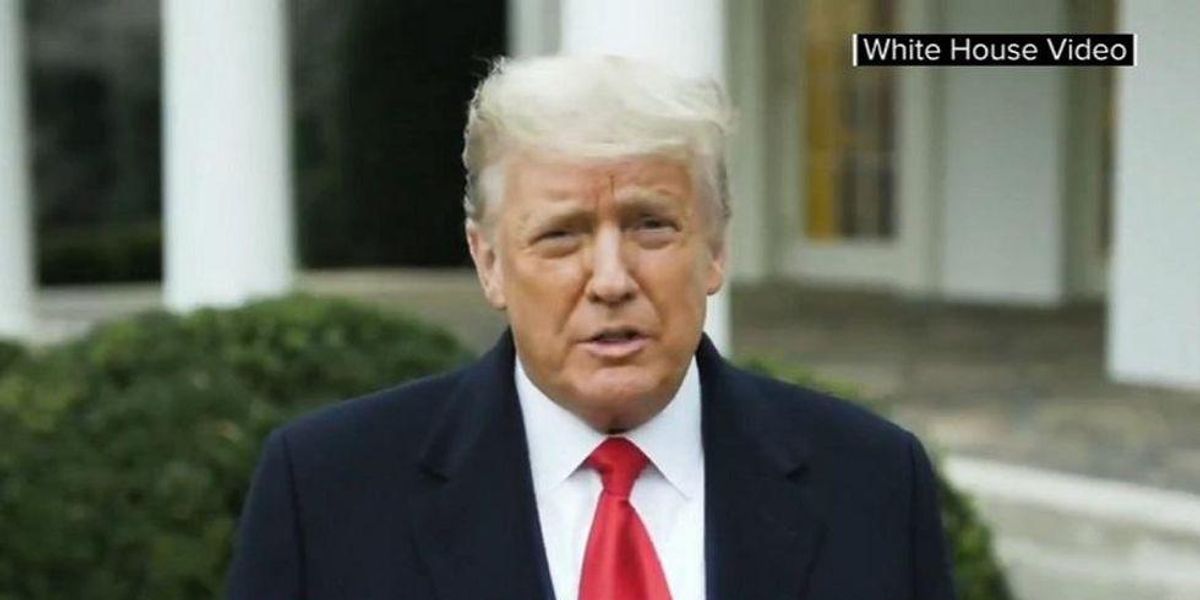 More details have emerged about how desperate Donald Trump was to stop Congress from certifying Joe Biden’s election win on January 6. Once-loyal lapdog Mike Pence wouldn’t go along with Trump's Constitution-shredding plan to unilaterally reject electors from states Trump lost like a loser, but Trump continued plotting with his loyal stooges at the Willard hotel in Washington DC over how they could overturn the election results.

But as Trump relayed to them the situation with Pence, he pressed his lieutenants about how to stop Biden’s certification from taking place on 6 January, and delay the certification process to get alternate slates of electors for Trump sent to Congress.

Again, for the record, there were no legal “alternate slates of electors for Trump” from the states Biden won decisively. Trump’s plan here was to overrule the voters and steal a second term. Several Trump lawyers reportedly insist that they "only considered delaying Biden’s certification at the request of state legislators because of voter fraud,” but the Trump campaign’s claims of voter fraud were repeatedly rejected and laughed out of court.

However, what really matters here is motive and intent. Trump was delusional enough to believe that stopping the electoral vote count would help him hold onto power. The objective was to delay, delay, delay, and what could’ve been more conducive to that goal than a MAGA mob storming the Capitol?

Consider Trump’s actual words when he addressed his supporters on January 6: "We fight like hell. And if you don't fight like hell, you're not going to have a country anymore.” True, there’s not yet a smoking gun where Trump states outright that he wanted a disturbance, but he also was reportedly “delighted” when it occurred and failed to call off the mob, despite GOP Leader Kevin McCarthy begging him to do so. Instead, he watched on TV, for 187 minutes.

Trump further seized upon the crisis as a means of blocking Biden’s victory.

In a voicemail recorded at about 7pm on 6 January, and reported by the Dispatch, [Rudy] Giuliani implored the Republican senator Tommy Tuberville to object to 10 states Biden won once Congress reconvened at 8pm, a process that would have concluded 15 hours later, close to 7 January.

“The only strategy we can follow is to object to numerous states and raise issues so that we get ourselves into tomorrow – ideally until the end of tomorrow,” Giuliani said.

So, the question remains, “Why aren’t these people in prison?” They tried to overturn a free and fair election, and the midterms are less than a year away. Trump and his family aren't hiding out in Argentina but are fully at liberty in Florida (personally, I’d rather be in Argentina). Republicans only partly joke about making Trump speaker of the House, and he’s still the frontrunner for the GOP presidential nomination in 2024. This isn’t an appropriate post-treason lifestyle.

Reasonable people will caution us to give Attorney General Merrick Garland and the Department of Justice time our democracy doesn’t actually have to assemble a strong case against Trump and his fellow coup plotters. However, CNN’s Elie Honig tweeted Monday that there is “zero public sign” of some “highly-secret probe of Trump’s role in trying to steal the election on January 6.” And neither the FBI director nor Adam Schiff are aware of any such probe.

For anyone who believes Garland is running some highly-secret probe of Trump's role in trying to steal the election or January 6 -- there's zero public sign of any such investigation, and neither the FBI Director nor Adam Schiff know of one.
— Elie Honig (@Elie Honig) 1638192887

Schiff also wonders why the DOJ and Garland haven’t launched an investigation into Trump’s alleged attempt to commit election fraud in Georgia. “Alleged” is almost too generous considering Trump was caught on tape asking Secretary of State Brad Raffensperger to “find” votes for him that didn’t exist.

Regardless, the people who know best insist that only spoiled, entitled brats would demand swift action when dealing with active threats to democracy ... you know, overwrought divas such as former Senator Claire McCaskill, who told Nicolle Wallace Monday that she lacks confidence right now in the Justice Department.

"This is not a time for norms... My message to the Department of Justice is get on it. Do not act like feds here, act like state prosecutors, got fast... Do not give the other side a month to answer... Get going guys, quit stalling and treading" - @clairecmc w/ @NicolleDWallacepic.twitter.com/Tdm5nauZM6
— Deadline White House (@Deadline White House) 1638229236

MCCASKILL: I think we may be watching the slow-moving but inevitable destruction of the ability of Congress to do meaningful oversight. That is a big deal in our Constitution ... and the people who can stop that from happening appear to be frozen in norms. This is not a time for norms. Congress appears to be frozen and unwilling to use its inherent power to try to force testimony. My message to the Department of Justice is get on it. Do not act like feds here, act like state prosecutors, go fast... Do not give the other side a month to answer... Get going guys, quit stalling and treading.

Wow, McCaskill’s joined the dreaded "Do Something!” Twitter. What’s gotten into her? It seems as if the potential collapse of the American experiment has her spooked.

It’s certainly possible that Garland is biding his time, feigning weakness, while preparing to strike aggressively like Michael Corleone at the end of The Godfather. If so, we can all pop open the champagne after the legal whackings. However, sensible people are very worried right now, so it seems sensible that we should share their concerns.