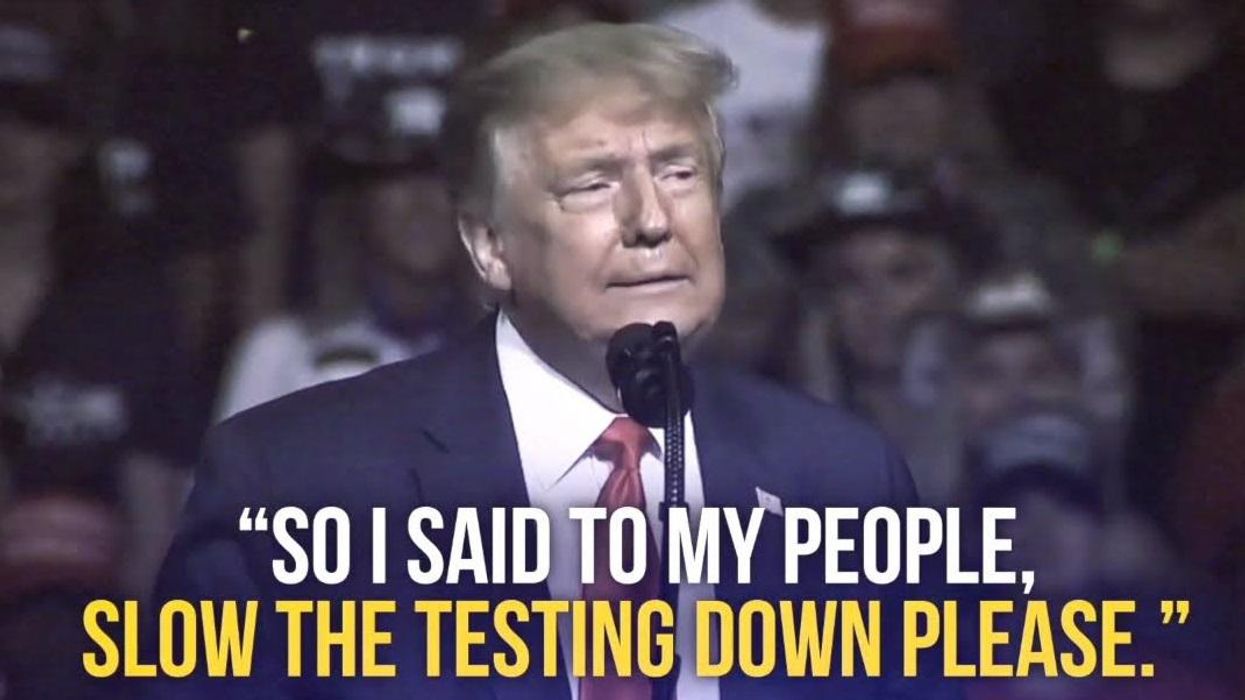 The House Select Subcommittee on the Coronavirus Crisis published a doozy of a report Friday on the Trump administration’s failures in handling the coronavirus pandemic in 2020, finding that Trump and his appointees made “deliberate efforts to undermine the nation’s coronavirus response for political purposes.”

It’s really an impressive collection of documents and witness testimony, showing that again and again the Trump administration interfered with science and tried to put a happy face on the pandemic, pursuing policies that weren't merely incoherent but outright dangerous, like promoting useless treatments for COVID, or pushing "herd immunity" — the idea that if the virus could spread quickly to as many Americans as possible, the survivors would all have immunity and the virus would magically go away, and if a few million people died, no big deal. (Haha, they wouldn't die, proponents said, because they'd be "protected" from contact with infected people, somehow — the advocates never got terribly specific about that. Presumably, vulnerable people would be locked down, although requiring nursing aides to wear masks would be tyranny.)

The report also looks at the Trump administration's deliberate efforts to slow testing — because as the Great Man himself explained, in public with his mouth, if you don't detect the disease with tests, it doesn't exist and the numbers are great — and at the overall shambles Trump's people made of getting desperately needed personal protective equipment (PPE) to hospitals. Other sections examine rampant fuckups in the administration of economic aid like disaster loans (lotsa fraud!), the USDA food box program (including those wedding planners who never put food on anyone's families!), and a shady $700 million loan to a failing trucking company (Yellow Corporation, the trucks with the orange-ish logo reading "YELLOW") that was dubiously deemed "critical to maintaining national security."

Among many non-surprises, the report confirms that the Trump administration muzzled the US Centers for Disease Control and Prevention and any scientists who might suggest maybe a deadly pandemic would be a bad thing. You probably recall that last week of February 2020, when everything went to shit and Donald Trump got mad at CDC's Dr. Nancy Messonnier for having said that the virus was likely to disrupt everyday life, and that that it was "not a question of if this will happen, but when this will happen, and how many people in this country will have severe illnesses." And even though that was an accurate statement, the CDC was subsequently blocked from holding press events for months, and administration officials refused to allow CDC scientists to talk to the media.

Some of the real eye-openers come from emails and testimony by Dr. Deborah Birx, the Trump White House's COVID response coordinator, who told the committee that when she began the job in March 2020 (a good month after Trump had declared a national health emergency), she learned that US health officials hadn't yet been in contact at all with some of the companies the administration would need to rely on to provide COVID testing supplies.

The report also says Birx confimed that Dr. Scott Atlas — Trump's "herd immunity" guru, who insisted doing nothing would be the absolute best — and other administration officials "purposefully weakened CDC’s coronavirus testing guidance in August 2020 to obscure how rapidly the virus was spreading across the country." Worse, Atlas also was involved in changing CDC's recommendations for who should be tested at all, defying the scientific consensus and saying that people with no symptoms shouldn't be tested even after exposure to the virus. Birx said the whole point of the change was to reduce the amount of testing being done, which of course meant nobody was actually infected. The science-based guidelines were restored in September 2020, but only over the objections of Atlas and others, Birx said.

Atlas's bizarre, unscientific boner for herd immunity also was behind am August 2020 "roundtable" attended by Trump and members of a group advocating for getting everyone infected for the good of the economy, and if people die, hey, they were brave soldiers in the fight. Folks from the same group attended a weird White House meeting in October 2020 with HHS secretary Alex Azar.

Birx wrote in an email that the Dr. Strangelove wannabes were "a fringe group without grounding in epidemics, public health or on the ground common sense experience,” and she refused to have anything to do with them. Dr. Francis Collins, director of the National Institutes of Health (NIH), similarly was appalled by the ideas being pushed by Atlas and the "fringe epidemiologists” and called for "a quick and devastating published take down” of the dangerous dickweeds, but ultimately the farthest he got with that was criticizing them in a Washington Post story.

And yes, in that same email, despite her objections to the quacks spreading lies, Birks offered to “go out of town or whatever gives the WH cover” the day of the meeting with Trump. Profiles in Birxing it up!

Another CDC official testified that she was "instructed to destroy evidence of political interference by a Trump Administration political appointee," and that she "understood" that the order had come directly from then-CDC Director Dr. Robert Redfield.

At other points in the pandemic, the report says, documents obtained by the committee reinforce the impression we all had that the Trump administration was just plain bored with the pandemic, and largely ignored it for the sake of the 2020 election campaign and the attempt to push the Big Lie that poor Trump would in the future get the election stolen from him.

There's a hell of a lot more, but it's also Christmas week and we don't want to bum you out further. Thank heaven these assholes are no longer running things, except for how they've got an entire cable network and wingnut media ecosystem convincing Trump supporters to keep the pandemic going forever, the end.

Yr Wonkette is funded entirely by reader donations! If you can, please give $5 or $10 a month to keep this little mommyblog bringing you all the greatest congressional committee reports you can stomach!