Kyle Rittenhouse as Captain America - from a Trump campaign vet running for Congress in Ohio, on a new map that makes him a slight favorite to beat Rep. Marcy Kaptur (D). https://t.co/eOZeUFjeJ0


We mock the images of Trump as Rocky Balboa or Trump on Mount Rushmore, but Republicans see value in this sort of thing -- it clearly taps into a primitive but powerful desire many ordinary voters have to unite around heroes, even if the actual heroism is pure fiction (as is the sculpted torso).

That's one of the purposes of the recent video in which an anime version of Congressman Paul Gosar killed his colleague Alexandria Ocasio-Cortez and attacked President Biden, as well as the videos Trump retweeted during his presidecy, in which he attacked and brutalized CNN and other mainstream news outlets.

Obviously these are appalling murder fantasies; the argument that only a fuddy-duddy liberal would take them seriously because they're based on scenes from anime or Hollywood cinema is transparently phony. But they're also intended to make Republicans into heroes -- and not just heroes, but heroes of rousing, crowd-pleasing entertainment. This makes Republican politicians (and politics-adjacent right-wing figures like Rittenhouse) larger than life, and it makes supporting the GOP team emotionally satisfying and fun.

When Trump was President, I started every morning by reading the New York Times, followed by the Washington Post, and would track both papers’ Web sites regularly throughout the day.... My friend Mike likened this constant monitoring to having a second job. It was exhausting, and the moment that Joe Biden was sworn into office I let it all go. When the new President speaks, I feel the way I do on a plane when the pilot announces that after reaching our cruising altitude he will head due north, or take a left at Lake Erie. You don’t need to tell me about your job, I always think. Just, you know, do it.

For Democrats, politics is work. No wonder Terry McAuliffe lost and Phil Murphy nearly did.

I'm not saying that Democrats should post altered Hollywood CGI videos of themselves murdering Republicans. I'm not saying Dems should portray Joe Biden as Superman -- although I'm convinced that The Onion's depiction of him as a shirtless guy washing his Trans Am in the driveway during the Obama years had a small but real positive effect on his public image. I'm saying that Democrats shouldn't dismiss the potential value of playing to the less developed parts of voters' brains.

They used to know how to do this... 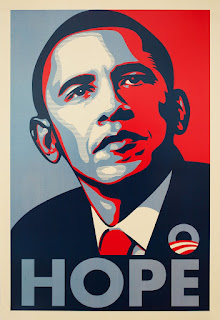 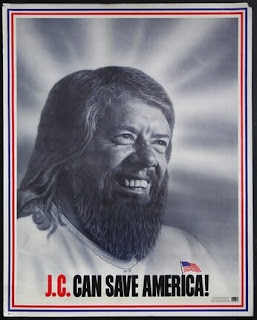 But now they zeem to want nothing to do with that kind of image-making, for the same reason that most Democratic strategists, according to a recent Atlantic story, don't want to try to recruit celebrity candidates:

But one by one, most of the strategists also rejected the idea of recruiting more celebrities as candidates: “Nothing is telling me that we have to go recruit a celebrity,” said A’shanti Gholar, the president of Emerge, which recruits Democratic women to run for office. “If you don’t have some kind of a résumé that says, This is what I’ve done for people, and this is what I’ve fought for ... then we don’t have any business recruiting such a person to run for office,” said Gilberto Hinojosa, the chair of the Texas Democratic Party. “The idea that you can recruit celebrities to run for political office is a fallacy and a fool’s errand,” said David Turner, the communications director for the Democratic Governors Association. “Democratic primary voters tend to be really engaged on substance,” Amanda Litman, a co-founder of Run for Something, which helps progressive candidates seek local office, told me. They “have less of a tolerance for emptiness.”

I'm against recruiting celebrities who don't know what they're doing -- we don't need any Democratic Trumps. But someone with star power who's willing to learn how to do the work? How is recruiting a candidate like that different from recruiting an astronaut (Mark Kelly, John Glenn) or a preacher (Raphael Warnock)? Why should hero worship be yet another area where we cede the contest to the GOP without even competing?