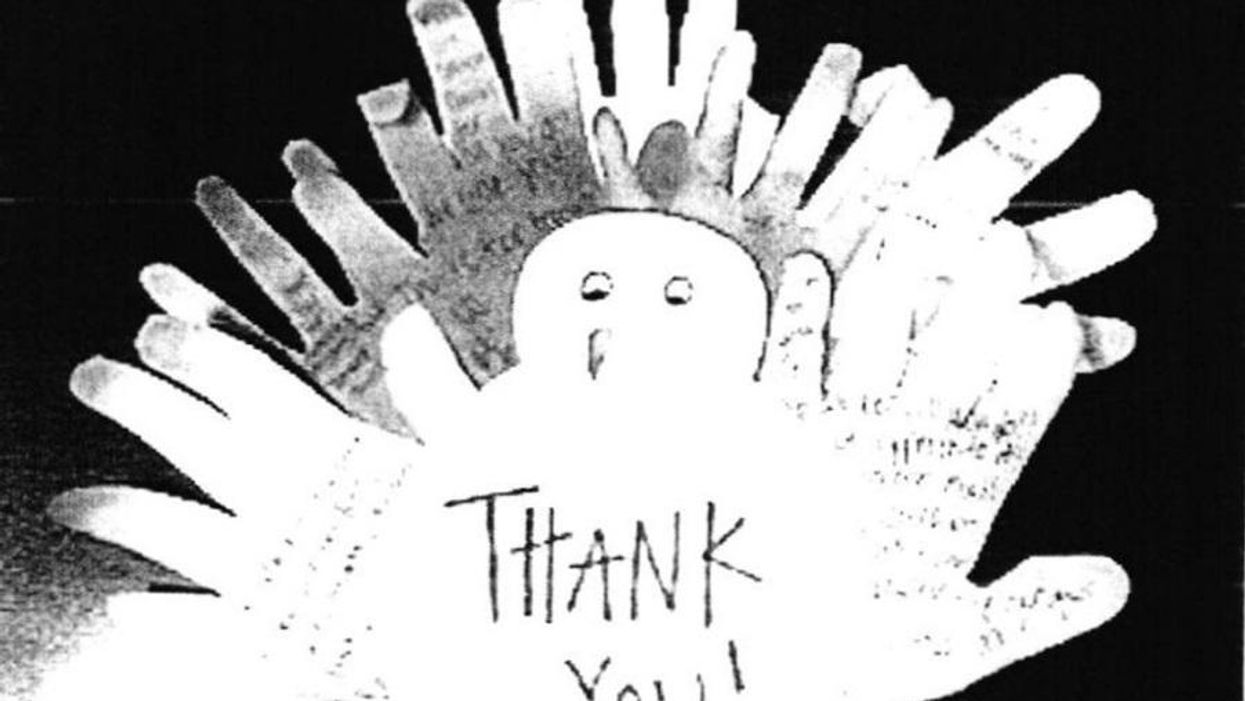 The sheriff of eastern Idaho's Bingham County has been charged with a load of felonies after a November 9 incident in which he waved a gun at a group of girls and their youth group leader, pulling the leader out of a car by her hair, then cursing and threatening to shoot the lot of them. The girls were on a pre-Thanksgiving crime spree in which they left paper turkey cutouts on people's doors, then knocked and ran away giggling like the 12- to 16-year-olds they are. Sheriff Craig Rowland was charged Tuesday by the Idaho Attorney General's office with "aggravated battery, aggravated assault, and exhibition of a deadly weapon."

Well damn. You hold a gun in the face of one Mormon youth group leader ...

Boise teevee station KTVB describes the incident that provoked Rowland to spring into action, ready to bring down deadly vengeance upon the marauding band of wilding LDS girls:

According to a probable cause affidavit, the seven girls, ages 12 to 16, were delivering paper "thankful turkeys" to people around the neighborhood as part of a youth group activity.

The girls would deliver the turkey thank-you notes by taping them to a recipient's door, ringing the doorbell, and running away before the person inside could see who had left the note.

The girls apparently thought that maybe Blackfoot, Idaho (population not quite 12,000), is a safe place for youthful high jinks and japery, but the sheriff, no doubt keenly aware that crime is out of control everywhere, went immediately into Cop Freakout Mode when his Yorkie started barking s bit after 8 p.m. and he saw two suspicious figures running from his house into the inky darkness.

According to the affidavit, the girls returned to their youth leader's car giggling, and told her they had tried to leave the turkey, but had nearly been caught by Craig Rowland so had been unable to deliver it. The group delivered another "thankful turkey" to a house nearby, then returned to the sheriff's home to try again.

Rowland told police that a few minutes after he had seen people running away from his house, his Ring doorbell activated and he heard his front door rattle.

The sheriff said he got his gun, and stepped outside wearing long johns and socks.

Soon, those potential committers of hoopla learned a thing or two about messing with the Long Johns Arm of the Law:

In Ring doorbell footage, Rowland is shown looking at the turkey and can be heard saying, “Thank you,” and “That’s frickin bulls***.”

Rowland said he saw a vehicle driving down the road, which he stopped. Rowland said the car did not look familiar and the driver of the car stopped and opened the driver’s side door.

“I reach in and pull the driver out by the hair,” Rowland told investigators, according to court documents. “I say, ‘Who the f*** are you?’ And I do have a gun in my hand, but I still have my finger on the slide.”

Rowland told investigators he pointed the gun at the woman’s head. The woman later identified herself as a neighbor and family friend for over three decades.

To be fair, it is a well-known fact that Antifa terrorists can be anyone, even a neighbor who thinks they've known you for years.

Rowland said he didn't recognize her, but that after holding his gun on the woman for a while, he ascertained that the danger had subsided and he allowed the suspicious individuals to continue on their way (we are assuming he framed it that way, at least).

And because "Rural Idaho," yes, there was alcohol and gratuitous racism, too!

Rowland told investigators that he had had a single alcoholic drink that night, but he was clear-headed. He told investigators about several threats that had been made against him and his wife in recent months that caused them to be concerned about people at their home.

Oh, yes, he also told investigators that the recent switch from daylight savings to standard time had "really messed me up," which is perhaps a point in favor of discontinuing the time shift, since apparently it turns some people into raving racist assholes.

The statements from the youth group leader and the girls differed only slightly from Rowland's account:

The woman said when Rowland pulled her out of the car, he reportedly lifted his gun then pointed it inches from her forehead, according to court documents. The woman said Rowland told her to never do this again, that he could shoot her, and that she needed to “get the f*** out of here.”

The girls who were in the car described Rowland getting upset, having a gun and saying the “f-bomb” multiple times. Several of them recall Rowland pointing the gun at the leader’s head and saying “I will f***ing shoot you.”

Rowland has taken a leave of absence from his job, but remains the elected county sheriff, at least for now.

Devon Boyer, spokesperson for the Shoshone-Bannock tribe, called Rowland's comments about Native people "extremely offensive" and called on Rowland to resign and issue a public apology to members of the Fort Hall reservation community.

We hope the woman and the children involved will be able to heal from this traumatic incident. This incident should not have occurred but proves racism still exists. We need major relationship building between our communities.

The tribe noted (pointedly, we hope) that no tribal members were involved in the incident. We'd like to think Boyer's comments might trigger some kind of review of his office's handling of past cases involving Bannock-Shoshone people, but then we remember we are in Idaho. Still, sounds like a really eager civil rights attorney might want to look at some records, huh?

This isn't Rowland's first brush with infamy for general assholishness; KTVB notes that in 2016, he said a state bill aimed at more efficient processing of rape kits, and of tracking possible matches, wasn't needed because he believed most reports of sexual assault are made up.

Under Idaho law, Rowland could face up to five years in prison on the count of aggravated assault, and/or 15 years on the aggravated battery charge. Also under Idaho politics, he was able to get reelected with 85 percent of the vote last fall, even after those 2016 comments about rape.

We're going to assume that coming close to shooting a nice LDS lady and some cheery teen girls may be a bridge too far for Bingham County residents, even for a manly man who might have gotten away with it if he'd claimed he was standing his ground against a less sympathetic victim.

Yr Wonkette is funded entirely by reader donations. If you can, please help us keep bringing you news of America's Finest Lawpersons with a $5 or $10 monthly donation. Dok isn't planning any visits to Bingham County, either.