Skip to content
John Stoehr of The Editorial Board believes Republican politics is very simple:

I say “obviously” because there was a long period when I thought the defense of whiteness at society’s center, which is clear when you bother looking, couldn’t be right. It was just too simple.

But then I learned, thanks to effort, study and the influence of people who knew better, that white supremacy is no simple thing at all. It can’t be, as it’s the principle organizing the whole of our society.

I'm guessing that many of you agree with this. I'm not so sure. White supremacy might be the main component of GOP politics, but is it everything to Republicans? Don't Republicans hate a lot of other people in addition to non-whites?

America’s first Black president was reelected more than a month before the Sandy Hook massacre during which 20 first-grade kids were shot to pieces down the road from where I live in New Haven.

The Republicans had a choice to make. They could turn away from a seditionary interpretation of the Second Amendment and toward good and sensible gun legislation to prevent other kids dying in cold blood.

Or they could lean into a seditionary interpretation of the Second Amendment on account of democracy having yielded another term for the first Black president who signaled the end of “our way of life.”

Do the right thing – let kids live? Do the wrong thing – let kids die? You know the answer. The Republicans and their white supporters would rather die, literally, than be replaced at the center of power. It was a fateful choice. The land is soaked by the blood of legions.

Dead kids were the price for protecting whiteness. 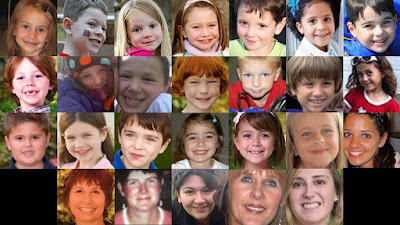 You'll say, "Well, those kids were from Connecticut, which is liberal. Republicans didn't care if they died." Parkland, Florida, where there was another mass slaughter of mostly white young people, was also fairly liberal. But the right doesn't care even when there's a mass slaughter of churchgoing white Texans. Here's a tweet that was posted yesterday by wingnutty Kentucky congressman Thomas Massie:

Stephen Willeford is a "good guy with a gun." On Nov. 5, 2017, Willeford used his AR-15 rifle to confront an active shooter at the First Baptist Church in Sutherland Springs, Texas. Willeford hit the shooter with all six shots he took, stopping a mass murder in progress. pic.twitter.com/R7Elzb2bb1


Willeford did end this mass shooting, but only after 26 people died and 22 were wounded.

This group of victims was mostly white as well: 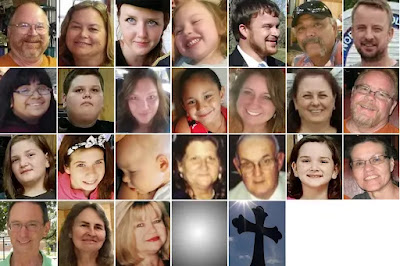 Very, very frequently, those culture war outrages have a racist component. But Republicans will use anything that works. They also like to make their voters hate advocates of gun control, whom they portray as either lily-livered, Prius-driving, soy-latte-swilling pajama boys or people of other gender identities who ally themselves with these half-men. Many of these demonized opponents of gun violence are white, but they're still the enemy to the GOP.

Stoehr moves on to abortion:

The Republicans are sacrificing the lives of children on the altar of whiteness while appearing oh-so-concerned about unborn children. But the pro-life movement doesn’t fear for all kids, just white ones.

Um ... I guess it is, although the GOP propaganda machine deploys people like Candace Owens to bewail the fact that Blacks can legally get abortions.

62% of abortions in Alabama are performed on black women.
Black women are only 7% of the population but account for over 40% of ALL abortions performed in America.
Due to abortion, black population growth has stagnated.
Planned Parenthood is voluntary genocide for black America.


I know that this is meant to appeal to white people (See? Liberals are the real racists!), but Republicans also want to increase their share of the non-white vote (which they did in 2020).

And even if you buy Stoehr's notion that anger about abortion is anger about the loss of white babies -- rather than just another way to make GOP voters hate liberal Democrats, by painting them as depraved and evil -- why don't Republicans support any policies that actually help white people to raise children? Republicans supported aid to families during the first year of the pandemic when Donald Trump needed to dole out largesse in an election year, but they're very much opposed to such aid in general. They don't support paid family leave or universal health care. They support budgets that shift the tax burden from wealthy people to ordinary people, not the other way around. They talk a lot about "globalist" companies shippping jobs overseas, but they never want to punish them for doing so. They rail against undocumented immigrants, arguing that these workers hold down wages for native-born Americans, but they never crack down on the companies that hire these immigrants. You'd almost think they're lying when they refer to their party as the party of the working class.

I know that the obvious response to this is that Republicans don't want to support programs that benefit working-class whites because those programs will also aid Those People. But by definition, any such program will help more white people, simply because, in America, there are more white people. Other right-populist countries find ways to help the Volk -- in Hungary, for instance, some aid is expressly intended to improve the birthrate (though it's not working) -- but in America, when Republicans run the country, the message is "Let them eat the culture war." Republicans simply don't bother to aid their voters.

And just as Republicans tolerate the mass slaughter (of whites and others) that's the inevitable by-product of their gun culture, they also tolerate an approach to the COVID pandemic that now kills Republicans at a faster rate than Democrats -- and their voters are fine with that, because the ones who haven't died yet would rather be angry than safe.

Stoehr says that the Republican Party "has mainstreamed ‘the great replacement’" theory. He's right, but that doesn't mean the GOP actually wants to preserve the white race. It just wants to make enough people angry -- about increasing multiculturalism, but also about a hundred other alleged outrages -- to keep winning every election forever.