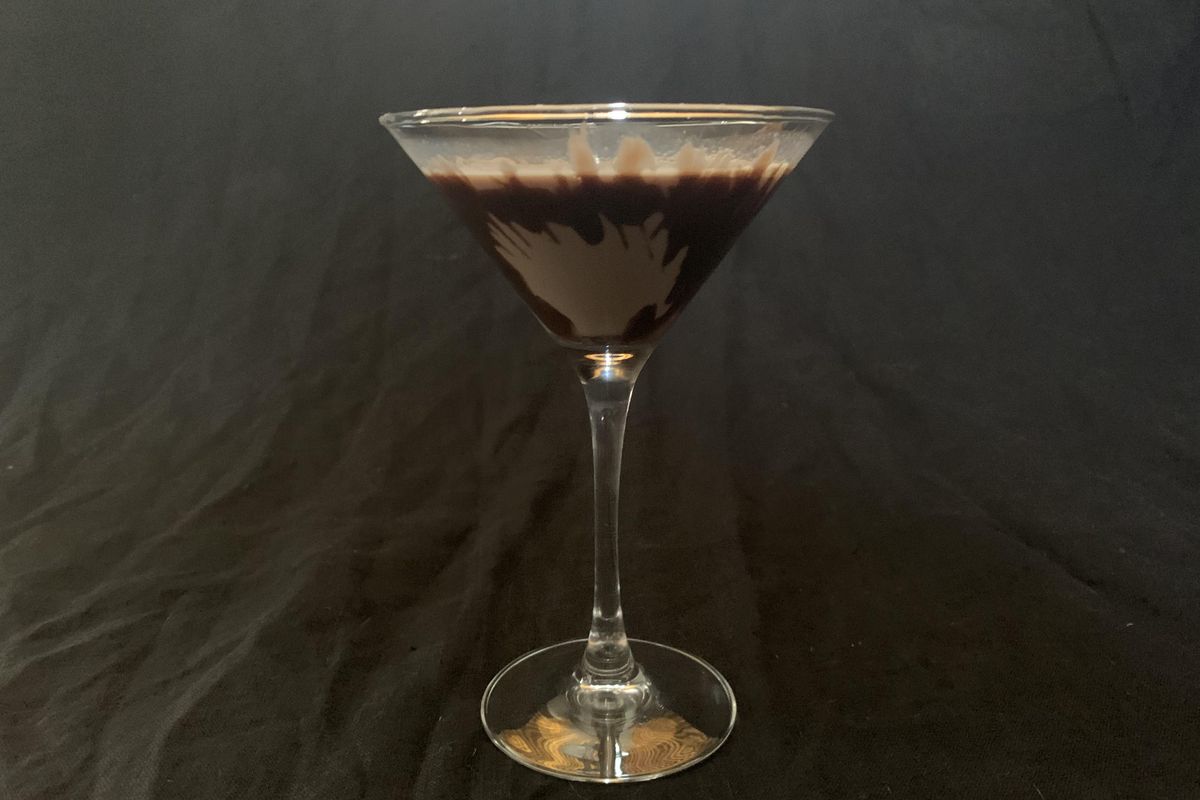 Greetings, Wonketteers! I'm Hooper, your bartender. I'm bringing you an alternative to pumpkin pie today, something sweeter than my normal cocktails. Let's make up some Chocolate Almond Martinis. Here's the recipe.

Add all ingredients into a cocktail shaker (chocolate syrup last). Shake and strain into a chilled martini glass.

Garnish: Drizzle a horizontal chocolate syrup band halfway up the inside of the martini glass. Drag a toothpick vertically through the syrup to make a "scribble" pattern.

To my great surprise, this drink has a more illustrious pedigree than I imagined. According to cocktail history, it was invented by Rock Hudson and Liz Taylor in 1955 while filming Giant. They loved chocolate, they loved vodka, they had rented houses across the street from each other during filming. It was a match made in heaven. Liz and Rock also invented getting sick on drinking too many chocolate martinis … so, word to the wise, limit one. This version's rich enough that you won't drink more than that. 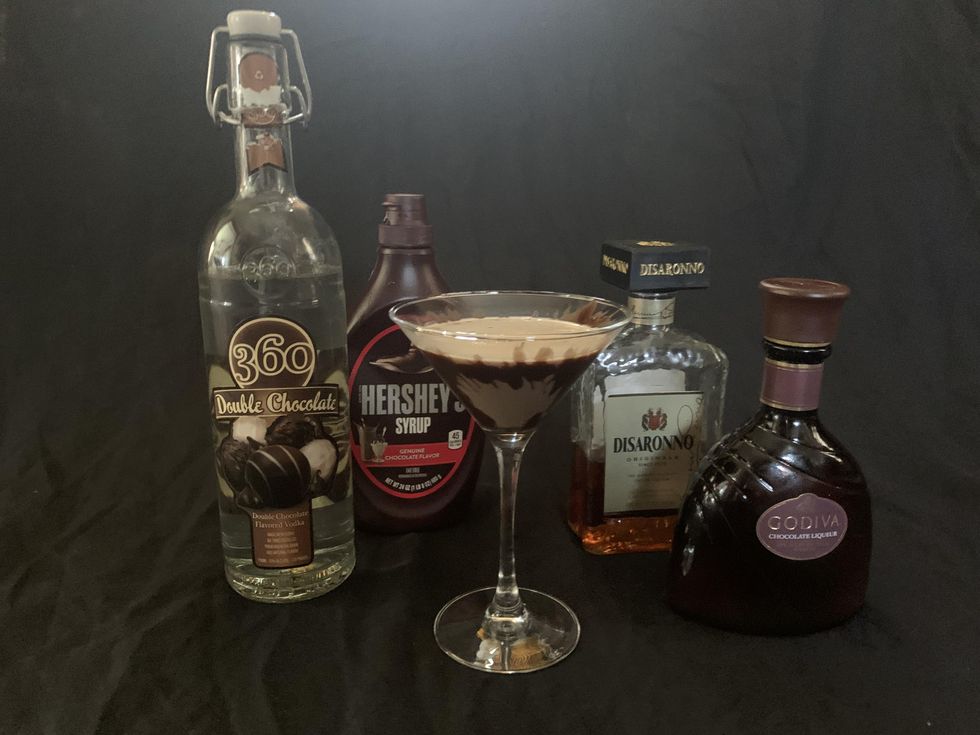 Let's go over the ingredients. I use this recipe as a template for all my dessert martinis, so I'll be tossing in some alternatives as I go. I'll list the variations at the end. The most important thing with dessert martinis? Have fun. Don't sweat the pedigree of your ingredients. This is the place for vodkas and cream liquors and artificial flavors. If it tastes good in the martini glass, go for it.

Godiva Chocolate Liquor: Chocolate obviously has to be front and center here, and this is the perfect tool to start things off. Cream liquors are exceptionally thick and concentrated. Any dessert martini that's using cream for a base will need some vodka to give it space.

Bailey's Irish Cream is the normal go-to cream liquor. And it's perfectly fine, but I don't always want Irish whiskey to be prominent in a dessert cocktail. I'll generally use Godiva for a chocolate martini. Rumchata is also high on my list for possible cream liquors. The rum and horchata flavors are invisible, but there's a strong cinnamon note that could be played with. It's also paper white, which can be useful. Visual appeal matters in dessert cocktails.

There's no reason to be snobby when choosing a cream liquor. Dessert cocktails like this use artificial flavors shamelessly. If it tastes good, use it, and don't worry about where the flavor came from. I've seen an apple pie flavor of Bailey's out there; add some real cider and some Jameson and you'd have a killer apple pie martini. Sonos is an Indian spice cream liquor that keeps fascinating me. Maybe an Earl Grey infused vodka, and some Fireball, for a chai tea latte martini? Why not? Drink what makes you happy. No one will judge you.

360 Chocolate Vodka: I try to use some kind of flavored vodka in every dessert martini. Flavored vodkas are sweet, but not as sweet as a cordial or crème liquor (like crème de menthe). Managing the sugar levels in these cocktails is the trickiest part of the process. If you aren't careful, you can make an undrinkable sugar bomb.

Obviously, a chocolate vodka's the best choice for a chocolate martini. But my staple for most dessert martinis is Stoli Vanilla. Vanilla cooperates with almost any other flavor; it works in apple pie martinis, chocolate martinis, you name it. If you're making a dessert cocktail with Bailey's as the star of the show, consider salted caramel vodka – those flavors will play into the whiskey well. I've used whipped cream vodka along with crème de menthe for a crystal clear "frost martini" for Christmas; that ended up too sweet, so a little bit of unflavored vodka would be in order.

Amaretto: This is the fun part. The third alcohol in the glass should be something that compliments your primary flavor, but doesn't occupy the same space. This is where the chocolate for the peanut butter goes, the caramel for your apple. I've got good amaretto in the liquor cabinet, so we're using it here. Skrewball peanut butter whiskey for a Reese's martini? Sure. Malibu coconut rum for a Mounds martini? Go for it. If it's a combination of flavors that makes sense, use it. You won't go wrong.

Chocolate syrup: This is the "secret ingredient" for any cream liquor based dessert martini. Cream liquors are little thin after shaking; the syrup brings back the body and boosts the chocolate flavor. I haven't tried it, but I'd experiment with caramel syrup or strawberry syrup for dulce de leche or strawberry cocktails.


Garnish: It's important to garnish these martinis. If you don't, you'll end up serving something that looks like a martini glass of Oval-tine. The "scribbled" chocolate sauce is an old trick I picked up from Anthony Bourdain out of Kitchen Confidential. It always works like a dream. Rimming the glass is also an option. Cocoa powder rimmed martinis are a great choice. I've used holiday sprinkles for Christmas as well. Generally, I prefer to rim only half the glass. The visual effect is striking, and it lets the guest decide how many sprinkles they want to ingest with their drink.

A quick summary of the variations I skimmed over here, with some suggested ratios:

It's the holidays. Play. Enjoy. OPEN THREAD, too.

In summary and conclusion, drink well, drink often, and tip your bartender — donate to Wonkette at the link below! Tiki Underground's blackout day is TODAY, if you're reading this and in Ohio go say hi to my friends! And if you'd like to buy some ingredients or bar gear from Amazon, please click on the links above, or this one!