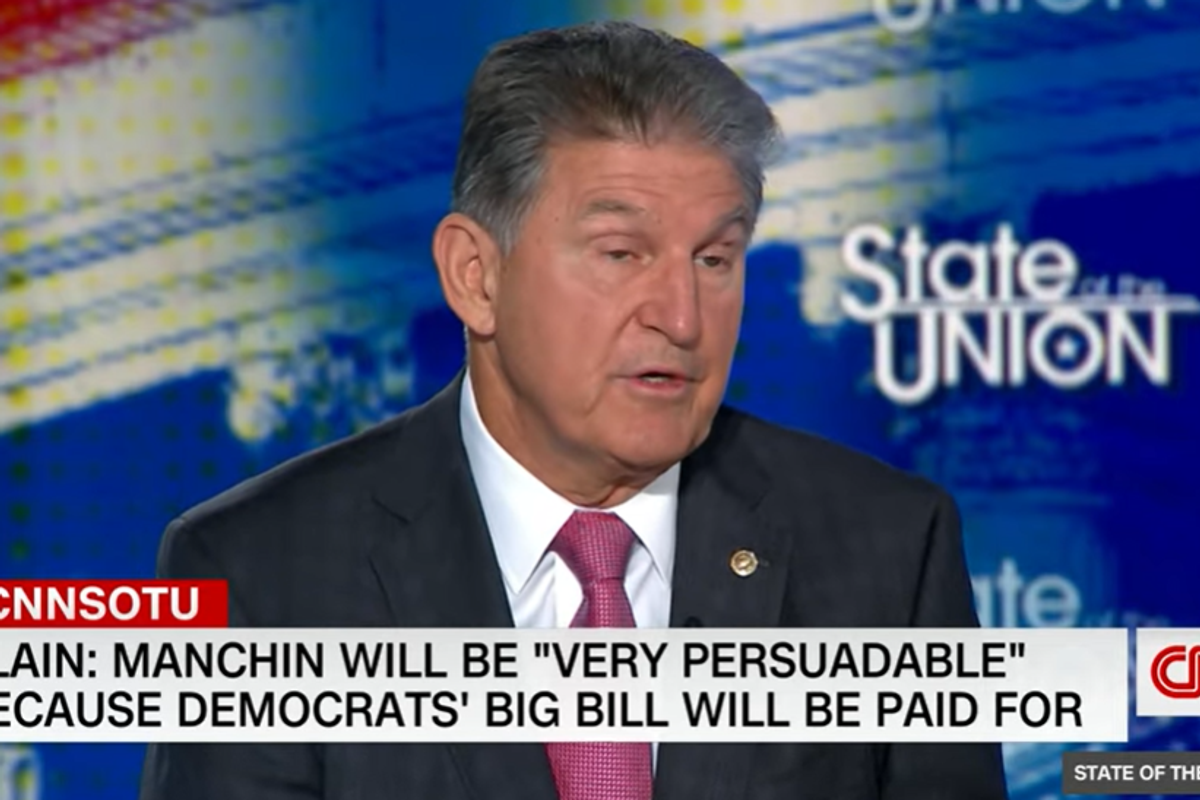 Good news, everyone. You will be glad to know that just days after Wonkette awarded the world's most important Democratic senator with its coveted Legislative Shitheel of the Year award, Joe Manchin has sailed into 2022 with a renewed focus on what's important, which is his needs and his feelings.

Axios reported yesterday morning that Manchin has returned to Build Back Better negotiations — you know, like he's fresh off holiday break — and that he still has "demands." Because that's what literally everyone wants to hear from Joe Manchin right now, about what's missing in his life. His needs, his feelings, his wants, his desires, his most twisted fantasies.

So what are his demands? Well, he still wants that damn child tax credit taken away, because that's some help for families he is NOT ON BOARD WITH. (You know, because the parents were just going to spend "tax credit" on drugs.) "People familiar with the matter" say he could be open to it, however, if the White House "dramatically lowers the income caps for eligible families." (He has also made noises about the "refundability" of the child tax credit, which is the game-changer part we got this last year, if you are some common do-gooder who wants to get children out of poverty.)

The senator’s concerns with the size and the scope of the package remain.

He's reportedly still worried it's going to cost $4 trillion in the next decade and also "he’s concerned about the inflationary effects of so much government spending." Wow, Joe Manchin's 2022 needs sound a lot like his 2021 needs.

That's great. Let's all stare at Joe Manchin to see what he does next!

It sounds like the big question in Washington is whether Majority Leader Chuck Schumer will really make a push to bring the bill to a vote this week, or whether there will be more time for negotiations.

The point is that it is January 3 of the year 2022, when we will have the first midterms since Joe Biden became president, and we get to spend a bunch more time reading and writing about all this horse crap.

Oh yes, and voting rights! Will Senate Democrats be able to get something done with those, or will Manchin and his pal Kyrsten Sinema keep holding those hostage too?

Guess we get to wait and see! Yay, us!