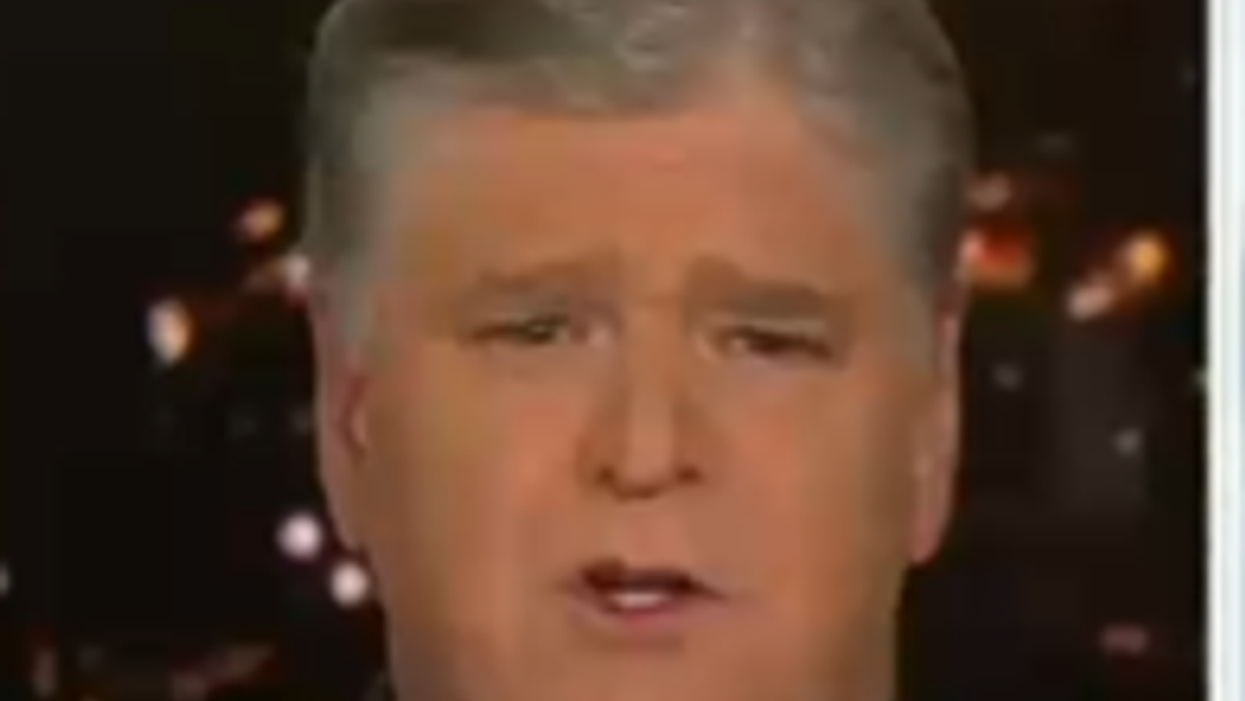 Sean Hannity, come on down! Looks like the Fox News host is the latest recipient of an invitation to come in and have a little chat with the House January 6 Select Committee. The members have been reading up on Trump's informal adviser, and they're sure to have so much to talk about!

Like what did he mean on January 5 — happy anniversary to Sean Hannity's text! — when he received "a stream of texts" and responded to White House Chief of Staff Mark Meadows “Im very worried about the next 48 hours.” 'Cause it kinda seems like he knew there was major potential for shit to go sideways with thousands of goons being summoned to DC and sicced on Congress after getting hopped up on insane lies about a stolen election.

Or what kind of insight did he have into the inner workings of the White House Counsel's Office that led him to text Meadows on December 31 that “We can’t lose the entire WH counsels office. I do NOT see January 6 happening the way he is being told. After the 6 th. [sic] He should announce will lead the nationwide effort to reform voting integrity. Go to Fl and watch Joe mess up daily. Stay engaged. When he speaks people will listen.”

Because that sure sounds like he knew that Justice Department lawyer Jeffrey Clark was trying to mount a coup from inside the DOJ, plotting to get himself made (acting) attorney general so that he could either use the position to announce non-existent investigations of electoral fraud in the swing states as a pretext for Republican legislators to re-allocate their electors, and/or declare a national emergency based on supposed foreign interference in our election via Chinese thermostats, and in either case use it as a pretext to block the peaceful transfer of power. And indeed, that plot was only foiled after "the entire WH counsels office" threatened to publicly announce their resignations, along with the leadership of the DOJ, just as Hannity had predicted.

Ditto for a January 5 text to Meadows that warned: “Pence pressure. WH counsel will leave.”

Not for nothing, but Meadows's claim that his conversations about goings-on at the White House and within the executive branch are privileged go out the window (to the minimal extent that they were ever within any window of plausibility) if he was flapping his yap to members of the public about them.

These fun little peeks under Hannity's skirts (sorry, not sorry) were tucked into the invitation from Select Committee Chair Bennie Thompson and Vice Chair Liz Cheney.

The Select Committee now has information in its possession, as outlined in part below, indicating that you had advance knowledge regarding President Trump’s and his legal team’s planning for January 6th. It also appears that you were expressing concerns and providing advice to the President and certain White House staff regarding that planning. You also had relevant communications while the riot was underway, and in the days thereafter. These communications make you a fact witness in our investigation.

And if you look under Hannity's skirt, you find Trump's brain — that guy didn't get to be called the shadow chief of staff by keeping his opinions to himself.

We already knew from Meadows's contempt hearing that during the attack on Congress, Hannity texted his White House counterpart that the president should "Ask people to peacefully leave the [C]apit[o]l.” But now we know that crazy shit was still going down later that week, as Hannity messaged Meadows and Rep. Jim Jordan, “Guys, we have a clear path to land the plane in 9 days. He can’t mention the election again. Ever. I did not have a good call with him today. And worse, I’m not sure what is left to do or say, and I don’t like not knowing if it’s truly understood. Ideas?”

LOL, remember when House Minority Leader Kevin McCarthy tried to put Jordan on the Select Committee and then stomped off in rage when Pelosi nixed him?

Interestingly, the committee has gone out of its way to pare down the request both chronologically (restricting the period of interest to between December 31, 2020, and January 20, 2021) and by confining their query to "a specific and narrow range of factual questions." This may well be a response to complaints that the committee is casting too broad a net, asking for communications going back to the summer of 2020 during the campaign and well into 2021.

The committee members also appear to be working to head off criticism that they are interfering with journalistic activities, writing, "The Select Committee has immense respect for the First Amendment to our Constitution, freedom of the press, and the rights of Americans to express their political opinions freely. For that reason, we do not intend to seek information from you regarding your broadcasts on radio or television, your public reporting or commentary, or your political views regarding any candidate for office."

Which is a nice way of stating the obvious: Sean Hannity isn't a journalist, and Fox isn't a news network. Hannity wasn't reporting on the White House, he was advising it, colluding with members of the executive and legislative branch to manage an increasingly erratic president. Mark Meadows wasn't Hannity's source, he was a coworker. So there is no First Amendment issue here, because Hannity and the rest of Murdoch's goons are not members of the press.

Which hasn't stopped Jay Sekulow, Hannity's lawyer, from howling about it.

"We are evaluating the letter from the committee," he said in a statement reported by CNN's Brian Stelter. "We remain very concerned about the constitutional implications especially as it relates to the First Amendment. We will respond as appropriate."

Because Sean Hannity's primary concern has always been propriety. It's the one thing he cares about more than journalistic ethics.

The odds of Hannity cooperating with the Committee are probably somewhere between slim and none. But just in case he's tempted to use his platform to push a false version of events about the day in question — no, he never! — the Committee is dropping in some footnotes to let him know they've got allll his texts.

Sorry to make you think about Hannity's short and curlies. Maybe it's better to try picturing them in the Committee members' hands — because that's where they are.