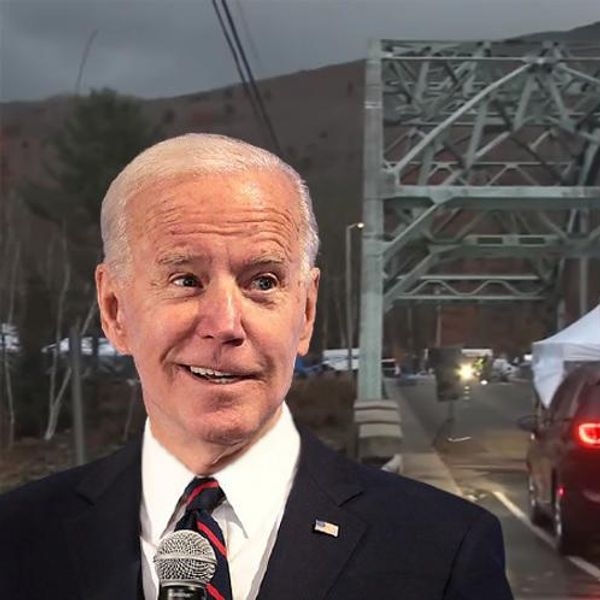 President Joe Biden signed the big Bipartisan Infrastructure bill into law at the White House yesterday, in a ceremony attended by some of the bipartisans who worked on and passed the bill. Like, even some Republicans, even though they've been targeted by Donald Trump and the Crazy Caucus for harassment, for betraying America by rebuilding its roads and bridges like a bunch of commies.

Biden touted the bill as a success for the good ol' values of compromise and bipartisanship, saying,

The bill I'm about to sign into law is proof that despite the cynics, Democrats and Republicans can come together and deliver results. We can do this. We can deliver real results for real people. [...]

Here in Washington, we've heard countless speeches and promises and white papers from experts. But today we're finally getting this done. So my message to the American people is this: America's moving again, and your life is going to change for the better.

It was a very moving sentiment as long as you don't get too hung up on little details like the demands by many of the Trumpiest House Republicans that the 13 Rs who voted for the bill be stripped of committee assignments, and perhaps keel-hauled.

All 32 Republicans from the House and Senate who voted for the bill were invited to the ceremony, but only five Senate Republicans attended. Sen. Ron Portman of Ohio, who is retiring when his term ends next year, spoke, saying he hoped there'd be more such bipartisan work to "advance the interests of the American People," but did not mention whether he would introduce legislation to genetically engineer the flying pigs that would make it necessary. He did, however, insist that the person who really deserved thanks for the bill was Donald Trump, for having said the word "infrastructure'" multiple times during his time in office without ever advancing a bill to the floor of either house.

Just two of the House Republicans who voted for the bill attended the ceremony: New York's Tom Reed, who is not running for reelection next year, and Alaska's Don Young, who will hold his seat until his entire state vanishes in a volcanic disaster. Reps Fred Upton (R-Michigan) and Andrew Garabino (R-New York) were the subjects of death threats after voting for the bill and being labeled as "traitors" by Marjorie Taylor-Greene, because that is how politics goes these days among the more cynical types.

Biden referred to the Republicans in Death Threat Disarray only obliquely, calling Portman a "hell of a good guy" and joking "I'm not hurting you, Rob, because I know you're not running again."

Senate Minority Leader Mitch McConnell, who was weirdly condemned by Trump as an "old crow" for having voted for the "terrible Democrat Socialist Infrastructure Plan," was not in attendance, having previously told a Kentucky radio station he had "other things I've got to do," like perhaps installing anti-aircraft defenses at his home and office.

Today, Biden is off to Woodstock, New Hampshire, as part of a series of road trips he and top members of his Cabinet will make to publicize what the bill is doing for American towns and cities. In New Hampshire, he'll speak at an 82-year-old bridge over the Pemigewasset River, which will finally be fully repaired after being on the state's "red list" of most-threatened infrastructure since 2013.

All told, New Hampshire will be getting $1.1 billion for roads and bridges over the next five years from the infrastructure bill, with another $400 million for water projects and $100 million for high-speed internet. We bet it'll probably see some of those EV charging stations, too!

Tomorrow, Biden will visit General Motors's ZERO EV assembly plant in Detroit-Hamtramck — a GM factory that's been retooled to build solely electric models. In August, Biden signed an executive order calling for half of new US vehicles sold to be zero-emissions, and the Infrastructure bill includes $7.5 billion to build a network of charging stations. At the factory tomorrow, Biden will talk about the job-creation measures in the new law, and will call for the prompt passage of the other, larger part of his agenda, the Build Back Better reconciliation bill, which includes even more funding for green energy and decarbonization, including generous tax credits for purchases of EVs built in the USA by union workers.

Here's hoping that at least one prominent Cabinet member drops by Arizona to talk up the state's new expansion of broadband access, which was paid for by aid to the states in the earlier American Rescue Plan, a detail that Gov. Doug Ducey didn't mention in his tweet announcing the program, which thanked Republican legislators who turned the money into legislation. At least the source of the funding was mentioned in the actual press release, although it too named only Republican legislators, and neither announcement mentioned that all of Arizona's Republicans voted against the Rescue Act.

Could be Biden needs to appoint an Undersecretary for Asterisks and Corrections.

Yr Wonkette is funded entirely by reader donations! Make a monthly $5 or $10 donation and you too can brag about all you're doing for America's information infrastructure!