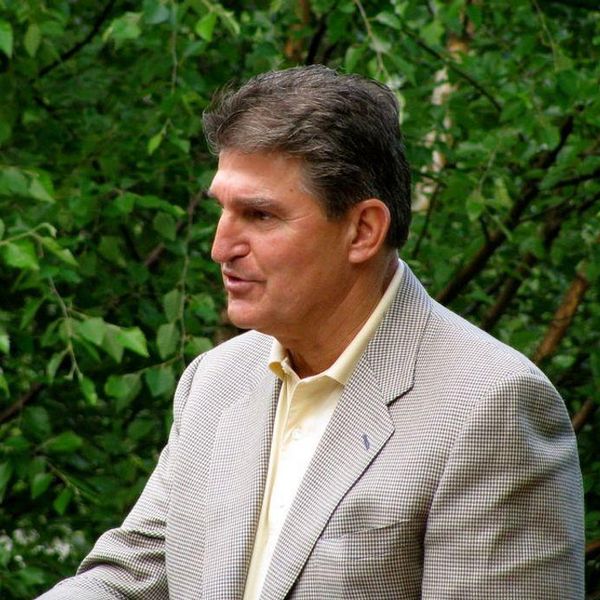 One of the more popular narratives about Joe Manchin is that he would surely love to support progressive ideas and proposals, but has to vote against things that help poor people, because otherwise, he will lose elections in West Virginia, one of the poorest states in the country. It is a story people really love. Manchin is not cruel, but practical, doing what he can to ensure that Mitch McConnell doesn't become Senate leader.

Sure, all the available polls may say people in West Virginia actually overwhelmingly support what is in President Joe Biden's Build Back Better plan, and that they particularly like the parts where we close loopholes that allow the wealthy to avoid paying taxes forever. Even the Republicans like that.


Even more strangely, another poll found that a very large majority of those in West Virginia thinks Medicare should be allowed to negotiate drug prices — with only eight percent as fiercely opposed to it as Manchin is — and that large majorities also support paid leave for illness, caring for a seriously ill family member or a new child, universal pre-K, and renovating affordable housing to make it more energy efficient. Small majorities support reducing Affordable Care Act insurance premiums and extending the enhanced Child Tax Credit.

But we must trust that Joe Manchin understands his constituency better than we do, and he is very sure they will straight up revolt should one billionaire be even somewhat inconvenienced. And we have to believe him, because Joe Manchin is an honorable man.
Not to mention that West Virginia is an entirely unknowable mass of land and all we can really determine about the people there is that they explicitly love working in coal mines, in particular, and are definitely not just working in coal mines because that happens to be the best job available in the area where they live, even though it just happens to be the best job available to many people in the area where they live. Pure coincidence!

However, this weekend on CNN, Columbia University professor Jeffrey Sachs suggested that Joe Manchin's impetus for not supporting the Build Back Better bill may not be based entirely on representing the wishes of all of his constituents, but rather his own interests and the interests of his very rich friends.

SACHS: What's talked about in this plan, for instance, pre-K, child care, basic health for hearing and so on, is so basic. Over other peer countries of ours, whether it's Canada or Britain or France or Germany, they all have this. This is nothing special. This is the most basic needs, but what's happening in the Senate is that rich people are protecting rich people. It's called plutocracy. You have rich people like Sen. Manchin, he represents an impoverished state but he himself is personally rich. He's an owner of two big companies. He's got millions of dollars of personal wealth, but even more than that, he's got his campaign funders saying to him, "We don't want to pay any more tax.'" The richest people in this country -- so that's what this battle is about. [For] rich people in America [to] pay a little bit of their unbelievable wealth so that poorer people can have their kids in pre-K, so that they can raise their children, so that people can get hearing aids. It's -- it's just so basic as this. [...]

This is the game of America, I'm sorry to say it, but Congress is filled with wealthy people, and behind them are even wealthier people who are putting billions of dollars of campaign contributions, so that the Congress votes against taxes on corporations and rich people. It's as simple as that.

And what has held back this bill is not only Manchin but also Senator [Kyrsten] Sinema who said "Oh, we don't want to raise corporate taxes! Oh my god!" The richest people in this country — they are protecting, and then they go and turn back — "Oh, sorry, we can't afford pre-K in this country. Oh, we can't afford to help you with the hearing aid. Oh, dental? That's completely out. Paid leave, no, how can we afford it?" Every other rich country affords this easily, because they actually tax rich people. But in this country, the whole game is don't tax the richest people.

There was a proposal for a billionaire's tax, where did that go? Well, some billionaires said "we don't like that tax!" Elon Musk, who has almost $300 billion of personal wealth, tweeted, "I don't like that very much.'" Come on. And then Manchin turns around and says, to the poorest people of the poorest state in the United States that he is supposed to represent but does not. He says, "Oh, I'm so sorry. We can't afford child care. This is not affordable in America," after he is the one that stopped the taxes on the rich.

One of the big moral panics of the 2016 election was "identity politics." Much like "Cultural Marxism" and "Critical Race Theory," "identity politics" was used as a cudgel by people who had absolutely no idea what the hell they are even talking about. But "identity politics" is simply the very obvious fact that who people are tends to inform what policies they support. As a person with a uterus, I'm a big fan of not being forced to be pregnant. In Manchin's case, he's a rich person who hangs out with other rich people, and therefore supports things that benefit him and them. It's rich person identity politics.

It's not surprising Manchin is acting in his own self-interest — most people do. Those in Congress voting for this bill despite the fact that it is very likely not in their own economic self-interest are the exception and not the rule. Pretending that this is about anything else, or that he is somehow the noble one here because he's "standing up" to his own party, is not doing anyone any favors. He's not standing up for anyone but himself and his fellow rich people.