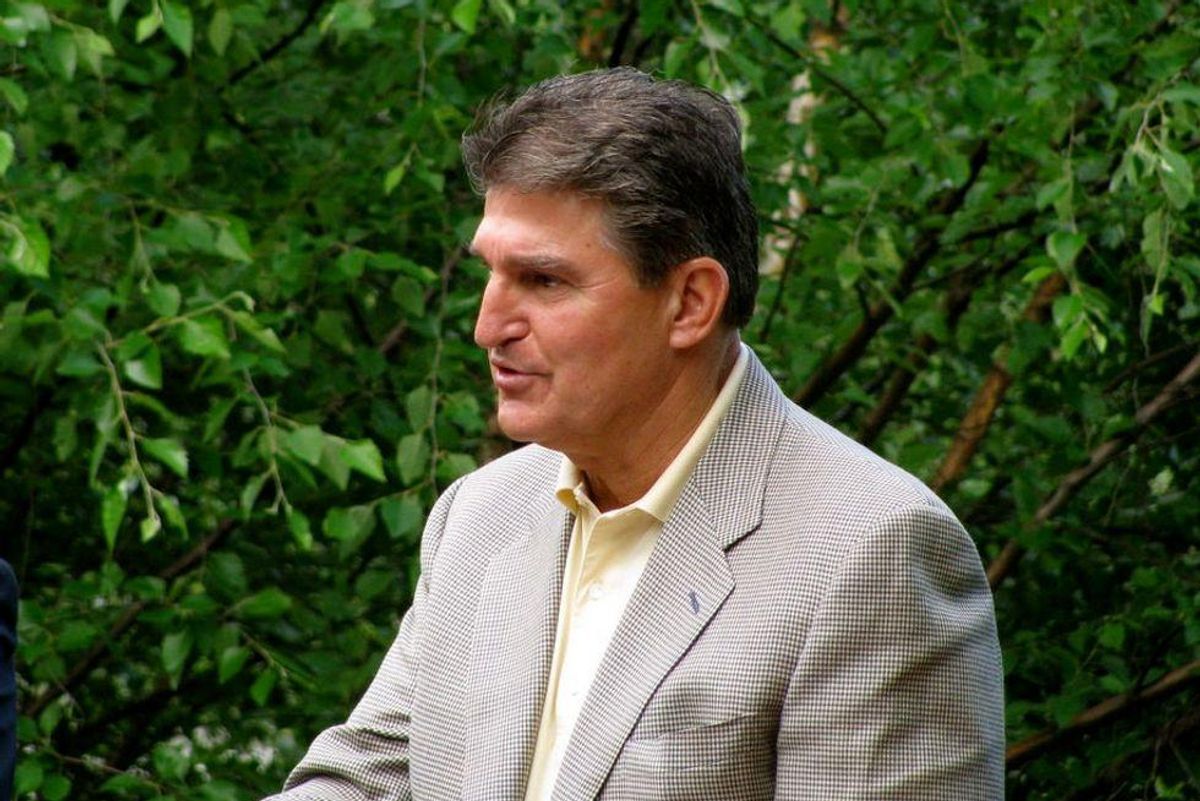 Today, in things that are perhaps surprising for people who are not yet completely jaded: The Huffington Post reports several sources say Joe Manchin, who torched President Joe Biden's Build Back Better agenda this weekend, had been going around for the past several months telling his colleagues that he thought the Child Tax Credit was bad because poor people might just take that money and spend it on drugs.

We assume he is talking about street drugs, as parents would have to have at least three kids to be able to afford the $650 EpiPens from which his daughter made millions.

"They'll just spend it on drugs" is a common refrain we've all heard over and over again from the Right as the reason why we can't have nice things and why people have to live in poverty. This is a convenient belief for people who neither want to pay higher taxes nor feel bad about hoarding vast amounts of wealth while other people are barely scraping by. It's easier to assuage any errant feelings of guilt by telling yourself that poor people are poor because they are morally deficient and would spend money on drugs before spending it on their children.

It's not, however, an argument we usually hear from Democrats, which Manchin is technically supposed to be.

It also does not seem like an argument that is going to be very popular with West Virginians, who might even feel a tad insulted by it.

According to these sources, Manchin also claimed that people would abuse a proposed sick leave policy by pretending to be sick and then going hunting or something — which is a luxury only those in the middle class and above ought to be able to do on occasion. Surely, it's much better that people go to work sick and possibly infect their co-workers and customers than run the risk of something like this happening, because that would just be devastating. Besides, those sick people could always just take the day off and not get paid, and then run the risk of not being able to afford their rent that month or being fired for not coming in.

One of the few who went on the record saying they had heard Manchin was making these remarks was Sen. Sherrod Brown of Ohio.

Sen. Sherrod Brown (D-Ohio), a top proponent of the child payments, said he had heard of Manchin’s remarks about the money going toward drugs but wasn’t paying any mind to it.

“The stories I hear the most, if you put it in categories, are child care, school supplies, college fund, phone bills,” Brown told HuffPost last week. “My focus is getting this program — which is the best thing Congress has done in 25 years — making sure it continues.”

Well, that would be nice. In July alone, the first month the child tax credit was implemented, three million children were lifted out of poverty. That is actually astounding when you consider that the credit is only $300 a month for children under six and $250 a month for those between six and 17. That's a small amount of money for such a big impact. Some might say that's a really good thing, and worth every penny. Though not, apparently, Joe Manchin.

If the things Joe Manchin believed about people were true — if poor people were poor because they were morally deficient lazy jerks who only ever wanted to take advantage of others and would do so given any opportunity, if people actually were able to live off of the minimum wage — many of his positions actually would make a certain amount of sense. The problem is, they're not.

If every person in America were absolutely perfect, if we all worked hard and only ever spent our money on sensible things (the lower classes, anyway), we would still have the exact same problems we have now. Our economic problems are not caused by workers not being good enough or moral enough.

We literally need people to do the work that we have decided shouldn't pay a living wage. This is the lesson of the pandemic. No matter how bad things were, we still needed people to work at the Targets where we scrambled for toilet paper. We needed people to deliver food and groceries to us so we could shelter in place. There was no amount of time that we were able to go without people doing these jobs and we cannot survive without them. Those people need enough money to eat, to pay rent and to take care of their children if they have them. We need people to do the work, therefore we need those people to be able to survive off of doing that work.

If the system still doesn't work even if everyone in it is perfect, that's a problem with the system, not with the people in it. That is what Joe Manchin doesn't seem to get, though with a seemingly incredibly pissed Chuck Schumer scheduling a vote on it anyway, Manchin presumably will be forced to explain this at some point in the near future.