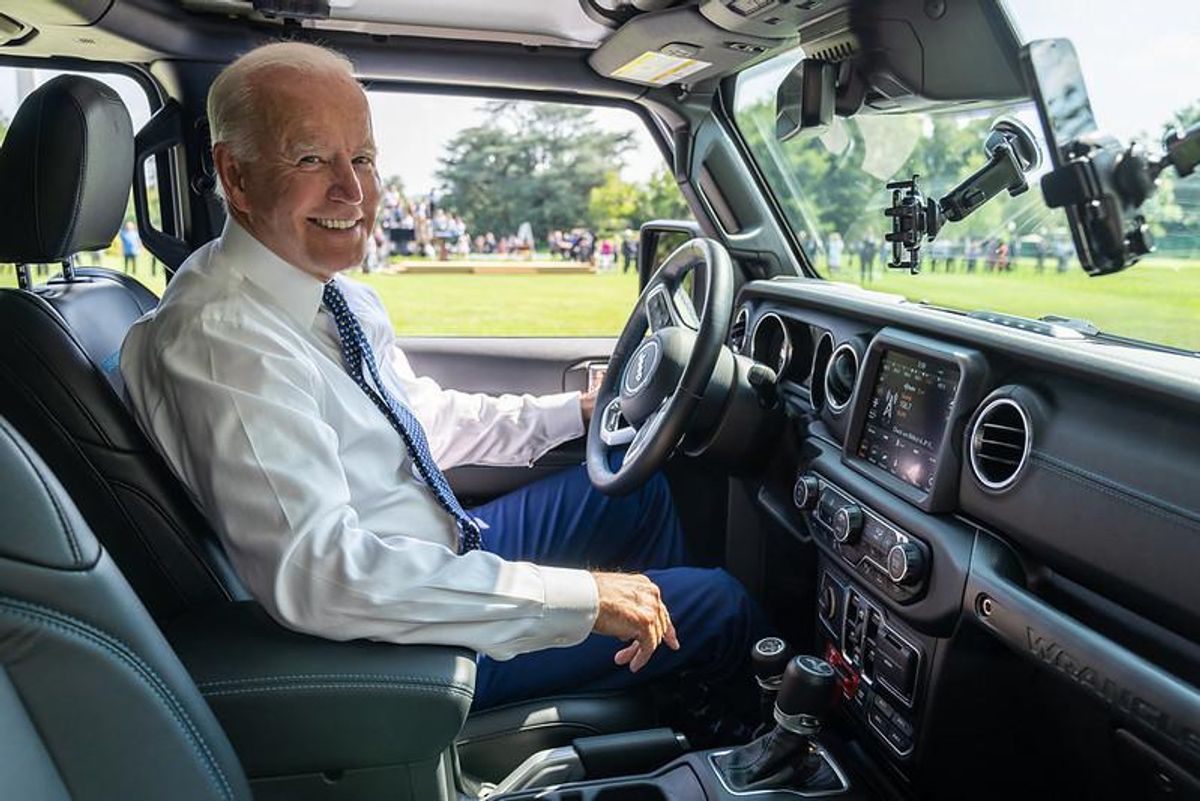 Sen. Joe Manchin, the leader of the Senate's two-member Democratic Obstruction Caucus, has found a new thing he doesn't like about the Build Back Better reconciliation bill that constitutes the greater part of Joe Biden's first-term agenda. This time Manchin is getting all pissy over a key part of the bill's plan for tax credits of up to $12,500 on the purchase of electric vehicles. He is simply OUTRAGED that in order to receive the full amount of the credit, consumers would have to purchase an EV that's both assembled in America, and built with union labor, because what about all the wonderful job creators who located their auto plants in "right to work" states, where workers have fewer rights at work?

Happily, there is a possible workaround to Manchin's objection, which was already floated in the Senate Finance Committee's version of the credit. There could be one credit for buying American-made, with a second credit if the vehicle is union-built. Easy-peasy, you can stop reading now except you'll miss a really good joke in the rest of the piece. We know how incentives work.

As we explainered yesterday in our SUPER MEGA-LISTICLE on Build Back Better, the new plan would extend the current base refund of $4000 per vehicle, with another $3500 added if the battery pack has a capacity of at least 40 kilowatt-hours. (For plug-in hybrids, that part of the tax credit only works if their gas tanks hold just 2.5 gallons or less, like the BMW i3's "range extender" model; a small gas motor runs a generator to give the battery enough oomph to make it about 40 more miles to either a charger or a gas station.) Another $500 is available for cars whose battery packs are built in the USA.

The bit that Manchin and a number of automakers with non-union workforces have complained about: On top of the other tax credits, the House bill offers another $4,500 for purchasing an EV that's both made in America and built with union labor. That's it, that's what Manchin is mad about.

The Washington Post reports it's all about fairness and competition and Not Choosing Winners and Losers, a "principle" that Manchin has previously invoked to kill off Build Back Better's most aggressive incentives to move the US toward clean electricity generation. Will no one offer equal help to the fossil fuels that risk civilizational catastrophe?

In an interview with Automotive News, Manchin said the idea was so totally unfair that he went straight to Sen. Debbie Stabenow (D-Michigan), the Senate sponsor of the pro-union provision, to complain. It's worth noting that currently, the only EV factories that meet both conditions are owned by Ford, GM, and Stellantis (that's this week's name for the umbrella corporation that owns Chrysler-Jeep-Fiat and we think maybe Buddy L). Also, they're all based in Detroit. Joe Biden said in October at a UAW job training center that's the damn idea, damn it: "I want those jobs here in Michigan, not halfway around the globe."

Manchin, as we say, let Stabenow know that this aggression against non-union automakers would not stand, man. Because America became great as a land of robber barons who exploited and even massacred workers, and that's how it should stay:

When I heard about this, what they were putting in the bill, I went right to the sponsor [Stabenow] and I said, 'This is wrong. This can't happen. It's not who we are as a country. It's not how we built this country, and the product should speak for itself.

Also in the (paywalled) Automotive News story, WaPo says, Manchin said the incentives were downright "not American," because that's not how how capitalism works: You can't "use everyone's tax dollars to pick winners and losers" unless you let Joe Manchin pick non-union winners.

Oh, yes, just to make plain that this IS about picking winners and losers, just different ones from the preference of the president and most of the Democratic Party, WaPo notes that Manchin delivered the remarks at an "event in Buffalo, W.Va., where he was celebrating a $240 million investment from Toyota Motor West Virginia." He just wants to help.

To her credit, Stabenow pointed out that she has worked with Manchin to ensure good union jobs for West Virginia, so maybe he could try not being a fucking prick, thank you very much (we're paraphrasing a little bit there).

"Senator Manchin and I work together on many issues, and I was proud to stand with him two years ago to help the members of the United Mine Workers of America union in West Virginia. At that time, some argued his bill was unfair and was picking winners and losers. But we rejected that argument and stood together to protect union pensions," she said. "This issue is no different. Standing up for hard-working Americans is always the right thing to do."

We honestly don't think this will necessarily doom the bill, however, because as we noted up top, the tax incentive could easily be modified by swapping in part of the Senate Finance Committee's version of the credit: Have one bonus credit, say $2000, for EVs built in the USA, and another $2,500 enhancer on top of that if they're union made. (We aren't crazy about other aspects of the Senate proposal, particularly its lower battery-capacity threshold, which would apply to more conventional plug-in hybrids like Rebecca's Chrysler Pacifica minivan, which only goes 32 miles on battery alone. We need to incentivize full EV's to get off the fossil fuel teat.) [Hahahaha LOL Wonkette has a minivan. — Editrix]

The downside of bifurcating the credit is obvious: It wouldn't provide the boost to organized labor that the House version does, and wouldn't encourage automakers to shift production to union labor to drive sales.

On t'other hand, the split credit would definitely drive demand for a wider range of US-built EVs, with the bonus for union-built vehicles still there as a substantial incentive. Currently, only two versions of Chevy's electric Bolt (little hatchback or slightly bigger SUV-ish model) qualify for the full credit, although as already-unionized manufacturers build more EVs, that number will increase. It might not be a bad idea to get more drivers' butts into EVs ASAP, to help the transition to electric, and then expand the union incentives farther down the line, sez me.

In conclusion, I really want to buy an EV in the next year or two, because even the used ones will qualify for (smaller) tax credits.

Yr Wonkette is funded entirely by reader donations. If you can, help us stay electrifying with a monthly donation of $5 or $10! Also, don't care what you think, that Buddy L joke was solid.