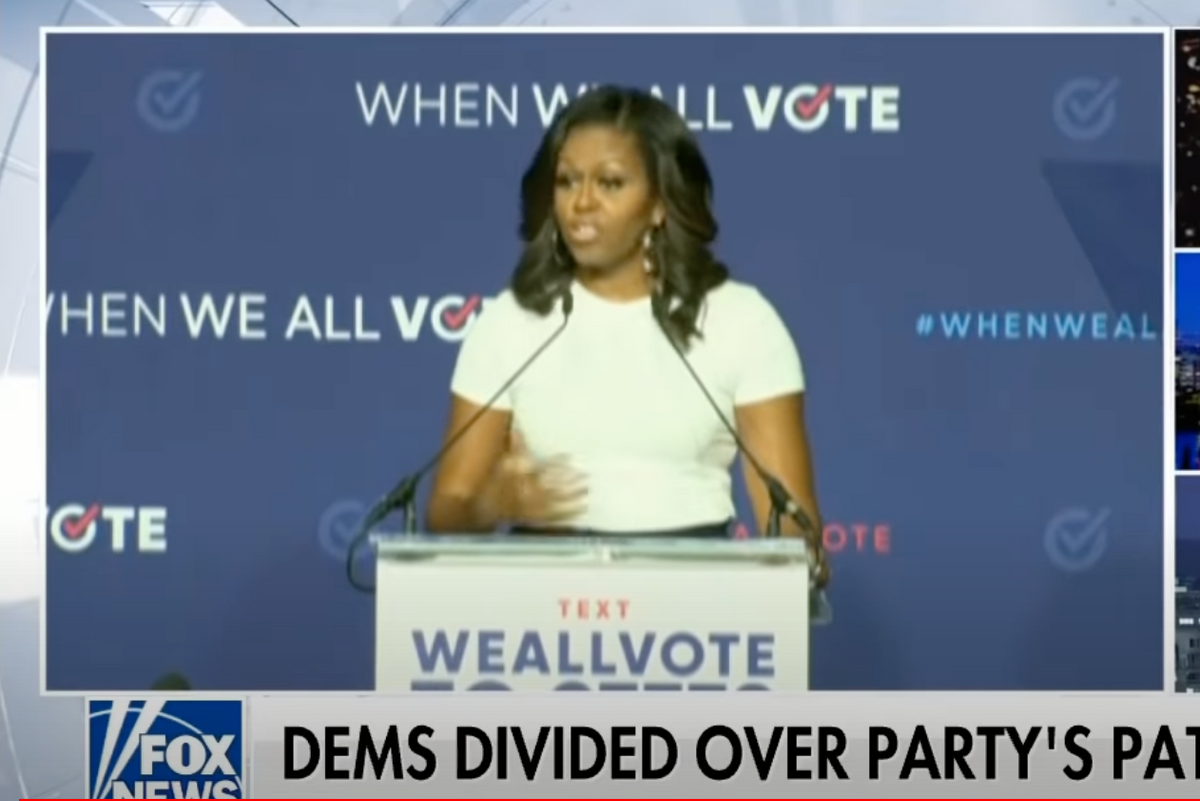 However, noted political pundit and deep thinker Joe Rogan suggested that Obama could replace President Joe Biden at the top of the 2024 Democratic ticket. On his podcast Monday, he said: "Harris comes back as the Vice President and Michelle Obama is the President. We get a double dose of diversity.”

Or we get two exceptional, talented women who are more capable than the ragamuffin Donald Trump/Ron DeSantis dream team Rogan presumes will run in 2024. It’s not just about diversity. An all-white male GOP ticket is just as reflective of “identity politics” as an all-Black woman Democratic ticket.

But before we get too far into this, let’s stress that Biden is probably running in 2024. Yes, he’s 79 and mortal, but he’s still relevant to this discussion.

Rogan extended some enthusiastic and only mildly racist praise for Obama:

“I really believe if Michelle Obama runs, she wins,” Rogan also added. “She’s great, she’s intelligent, she’s articulate, she’s the wife of the best president that we have had in our lifetime in terms of like a representative of intelligent articulate people.”

Michelle Obama graduated from Princeton and Harvard Law, so the guy who ate a roach on "Fear Factor" would someday recognize that she’s well-spoken.

Over on Fox News, Pete Hegseth, who was filling in for Sean Hannity, asked the articulate Matt Schlapp and Rep. Nancy Mace what they thought of Rogan’s prediction, because apparently Rogan is a serious person who doesn’t just make noises with his mouth.

The Democratic Party is not a socialist party, and it’s both hilarious and infuriating that Republicans keep dismissing “identity politics" when the GOP is openly a white Christian identity party. Anyway, Schlapp admitted he doesn’t know Biden personally, but he’s gonna go ahead and assume Biden is too senile and decrepit to run again in 2024 unless "they can do one of these pseudo-presidential races where he stays in his basement with Hunter and everybody can vote as many times as they want through the mail.”

Biden beat Trump from his garden-level office, which is pretty damning of Schlapp’s Dear Leader, so Schlapp grossly suggests that people voted illegally — multiple times, even! — by mail. There is zero evidence to support his claim, but undermining the integrity of US elections is a major plank of the Republican Party platform. Schlapp then launched into a racist, misogynistic rant against Harris.

SCHLAPP: So now you have the identity politics of picking Kamala Harris. Why? Well, she’s a woman, she’s a woman of color, she comes from California, she’s very leftwing. Now they have this problem of, "Oh my God, they’ve gotten to see Kamala Harris, and she’s terrible.”

I mean where is she, on planet Mars during all of this? I mean they don’t put her out at all because she’s not able to connect to the American people.

He means “white people.” Harris is actually polling around the same as Donald Trump himself when he was president, and that’s just on Trump’s good days. His approval rating frequently dipped into the mid-30s, and no one talked about replacing him in 2020. The Fox News propaganda machine just insisted that Trump was bigger than both the Beatles and Jesus.

SCHLAPP: So they’re gonna replace Kamala Harris. They gotta look to the identity politics, and I have to say, Michelle Obama fits that type of thinking. Another woman of color who’s obviously got good poll numbers.

If Michelle Obama chose to run for president, she wouldn’t be an affirmative action pick. She’s incredibly popular. If anyone owes their current status to their racial identity, it’s Matt Schlapp.

During this discussion, Rep. Nancy Mace smiled uncomfortably as if passing a kidney stone on live television. Her sole contribution was to claim she couldn’t think of a single good thing the Biden/Harris administration has done for the country. She should probably talk to her fellow Republicans who shamelessly took credit for the many benefits in Biden’s COVID-19 relief package, which they voted against.