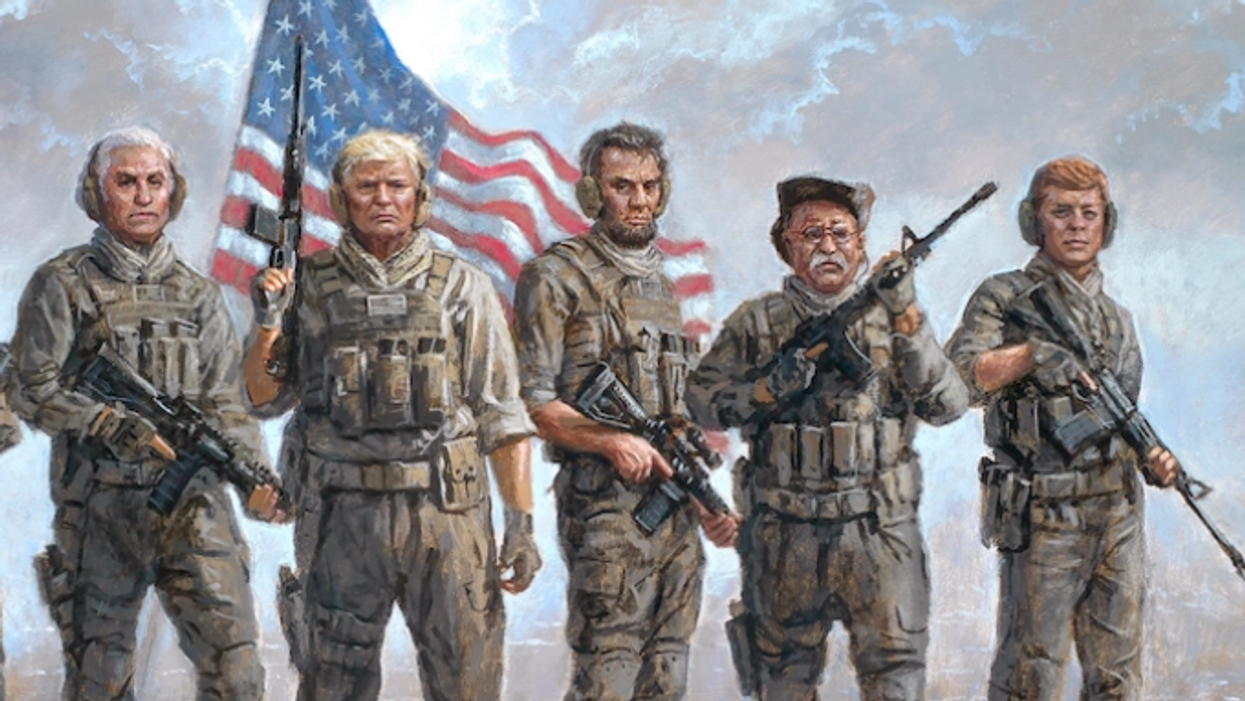 Usually when hero patriot Christian inspiration prophet painter Jon McNaughton releases one of his little paintings, we let Doktor Zoom review it. You know, like when he paints "Duck Dynasty" riding on Donald Trump's muscular back while they do sexual anger tangos with Robert Mueller, to show him who's boss. Or when he paints Donald Trump wearing regular-sized man pants while he does sexual anger tangos to the American flag. (Are those descriptions of actual Jon McNaughton paintings, or did we mix up descriptions of multiple paintings like somebody who doesn't even respect McNaughton's genius? It's the second thing.)

Hey this painting in this link is a piece of shit too.

See? It's got Dasher and Dancer and Prancer and Vixen, Comet and Cupid and right there in the middle, Donald, who appears to be treading on a snake. 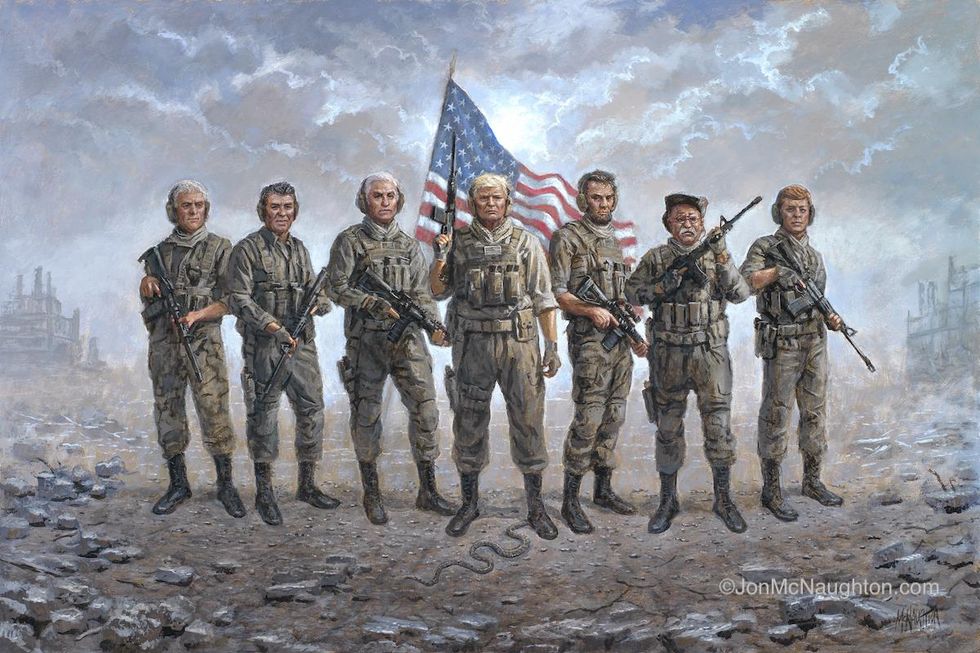 NO STEP ON SNEK

Of course, because McNaughton has such a well-documented love for Donald Trump, he puts Trump in the middle and paints Abraham Lincoln next to him all sassy like he and Washington are Trump's sidekicks. This is also likely why McNaughton paints Trump to look like he's about 174 years younger than he actually is. As for why Trump is the only president in the picture who sorta kinda appears to have a discernible bulge, WELL, we have no comment.

Before you make too much fun of this shitty garbage painting, though, remember: this is the closest to Mount Rushmore the 2020 election loser is ever getting.

The others in the painting, according to McNaughton, and we guess we're just gonna have to trust him here, are, from left, Thomas Jefferson, St. Ronald of Reagan, Teddy Roosevelt, and JFK. All such similar presidents, if you were a student of history and were going to rank your favorites.

There have been 46 US Presidents since George Washington: some good, others not so much. As the artist, I decided to put together my team of the most magnificent seven Presidents. How did I choose this motley crew? Each was loved and hated for different reasons, but all stood against the establishment and to fight for American
ideals. These are - The Magnificent Seven!

We don't want to read too much into how skillfully McNaughton paints each president, and we don't want to mine these images for secret messages, because Occam's Razor says he's just not that good at painting and that's why JFK looks weird as shit.

Of course, on top of Trump's head, behind the American flag, you see the sun creeping in, and that of course symbolizes Jesus, haha LOL just kidding Thomas Kinkade is the one who puts secret Where's Waldo Jesuses in his paintings and Thomas Kinkade and Jon McNaughton are certifiably different people, according to facts. (Also Wikipedia says Kinkade is dead as of nine years ago. If we knew that, we completely forgot it.)

But what did Trump and his Six Sidekicks destroy in that painting, and why are they standing in rubble? Maybe woke cancel culture. Maybe just THE WORLD.

Before we leave this post, just want everyone to also know that McNaughton is selling a wall calendar of his most favoritest paintings, which might be nice for holiday gift-giving, or if you need a calendar to remind you when to get abortions and do critical race theory.