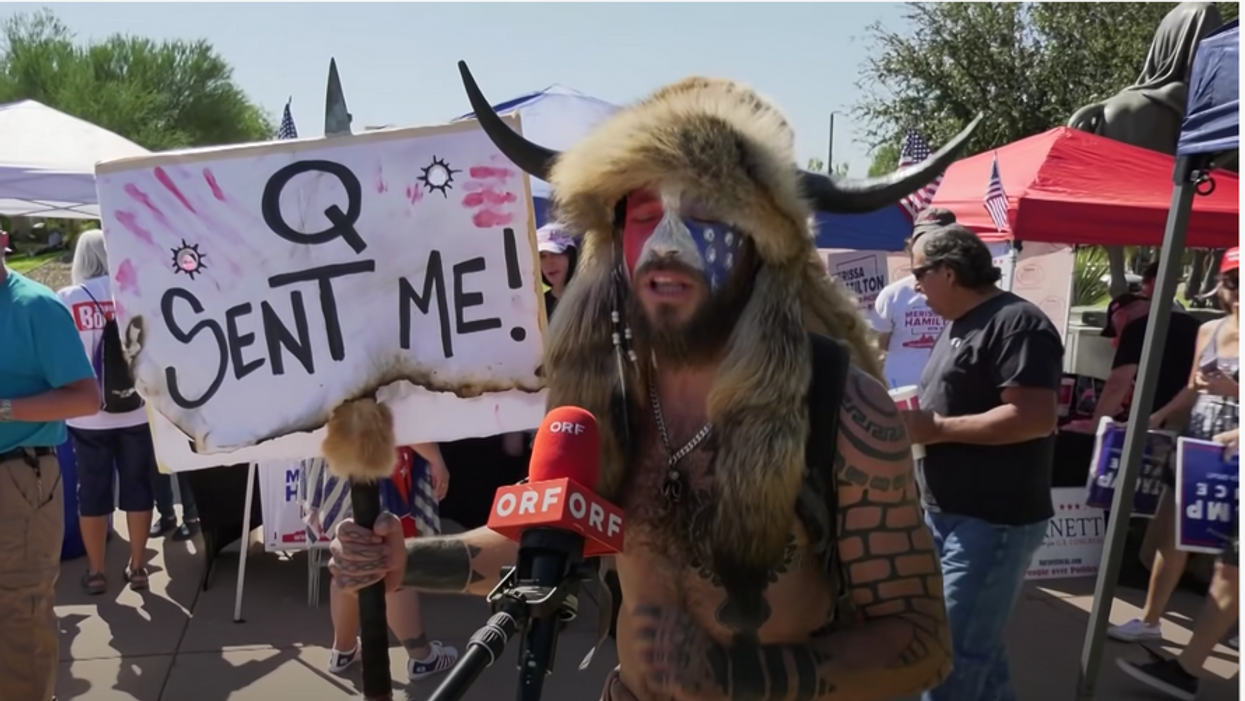 Pour one out for the "Q-Anon Shaman." Actually, pour out 41, since that's the number of months Jacob Chansley will be spending in the pokey after he invaded the Capitol on January 6 wearing that ridiculous fur horn hat and waving around a six-foot spear-tipped flag pole.

It's been a wild ride for the 34-year-old who became the face of the Capitol Riot. Chansley was among the first of the insurrectionists to breach the Capitol and was photographed in the Senate chamber, where he shouted, "Times up, motherfuckers!" Then he scaled the dais, sat in Mike Pence's seat, shouted "Mike Pence is a fucking traitor!" and then scrawled a note on official papers warning, "It's Only A Matter of Time. Justice Is Coming!"

Chansley's lawyer Al Watkins was equally colorful, first advocating for a pardon from Trump, then insisting that his client had seen the error of his ways ... mostly.

"Have I witnessed this traversing of a path away from Q-Anon by Jacob? Absolutely. Has he extricated himself such that his boots don't smell of Q-Anon? No. No, it's still there," Watkins said at a press conference in January.

Watkins's defense consisted mainly of calling his client an idiot who was too stupid to have real criminal intent and had been manipulated by evil people.

"A lot of these defendants — and I'm going to use this colloquial term, perhaps disrespectfully — but they're all fucking short-bus people. These are people with brain damage, they're fucking r----ded, they're on the goddamn spectrum," he told TPM. "But they're our brothers, our sisters, our neighbors, our coworkers — they're part of our country. These aren't bad people, they don't have prior criminal history. Fuck, they were subjected to four-plus years of goddamn propaganda the likes of which the world has not seen since fucking Hitler."

The lawyer continued in this vein in his sentencing memorandum, twice likening his client to the movie character Forrest Gump. Describing Chansley's costume and "Shamanic chants" as "indicia of mental health vulnerabilities," the brief notes his "apparent Forrest Gump-like obliviousness to much of the activity and many of the actions of those surrounding him as he approached, entered, and traversed the Capitol."

In contrast, the government's sentencing memorandum notes Chansley's social media posts in the months before the riot calling to "hang the traitors lurking among us" as well as media interviews he gave afterward celebrating it. "The fact that we had a bunch of our traitors in office hunker down, put on their gas masks and retreat into their underground bunker, I consider that a win" he told the UK Telegraph on January 8.

Watkins argued for a significant downward departure from the sentencing guidelines, preferably to "time served," adding, "It is time for the Shaman to start on his journey to freedom — not from jail, but from mental health infirmities of significance. It is time for Mr. Chansley to commence his journey from within."

The government said he should get 41 to 51 months.

In the end, the government got its way, more or less.

""What you did was terrible," Senior US District Judge Royce Lamberth told Chansley. "You made yourself the epitome of the riot."

But Lamberth also praised the defendant for his lengthy statement of repentance, in which Chansley invoked Jesus, Mahatma Gandhi, and the movie Shawshank Redemption. Chansley returned the favor, praising Lamberth for ordering the Bureau of Prisons to feed him organic food, saying, "God bless you for it. It made all the difference ... I could not have asked God for a better judge."

"I think you are genuine in your remorse and heartfelt," the judge agreed. "Parts of those remarks are akin to the kinds of things Martin Luther King would have said."

Which makes sense, if you think about it. Because Chansley's lawyer described him as "short-bus people," and Dr. King led a bus boycott, so these two things are practically the same.