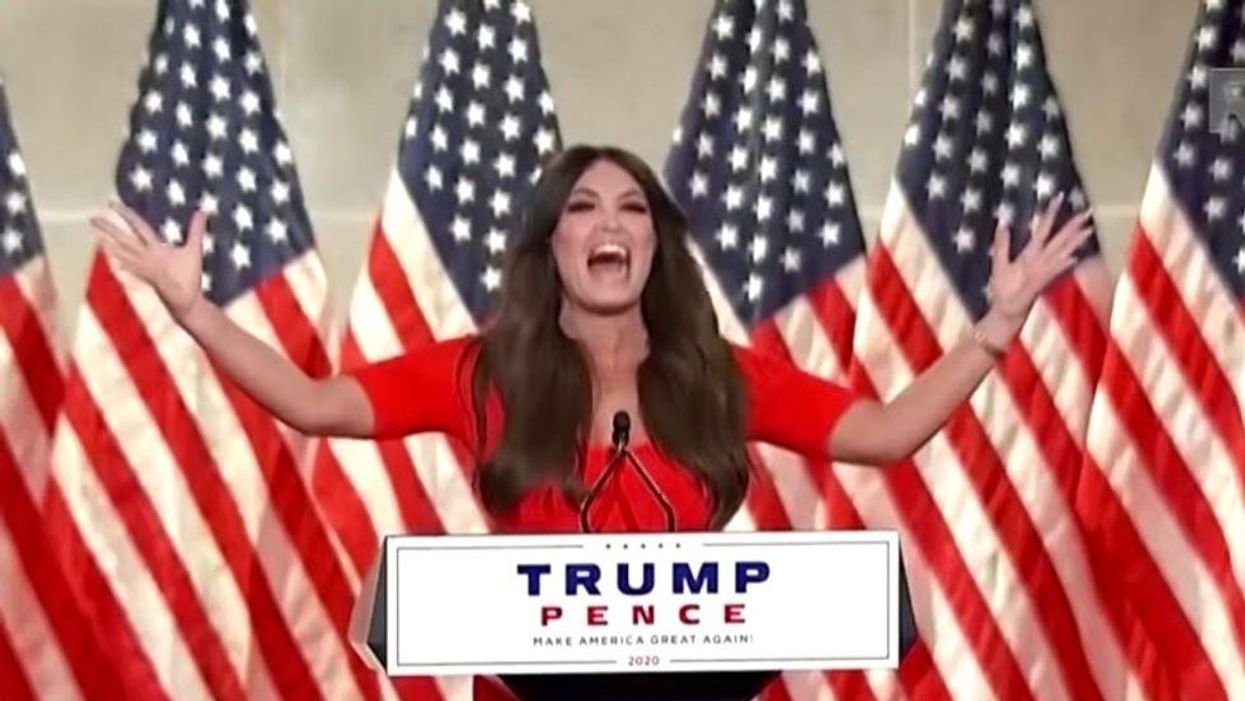 ProPublica got its hands on texts and email from Don Jr.'s ladyfriend Kimberly Guilfoyle clamoring to be given credit for her role in organizing the January 6 protest, and they make it clear that her fingerprints are all over this thing.

"Literally one of my donors Julie at 3 million," she texted January 4 to Katrina Pierson, the Trump campaign's liaison to the White House for the protest, demanding to be given a speaking slot and dictate which speakers got to address the crowd.

Guilfoyle appears to be referring to Publix supermarket heir Julie Jenkins Fancelli, whose largesse was revealed previously by ProPublica when Guilfoyle's deputy Caroline Wren also sought to take credit for it.

Dustin Stockton, a Republican operative who helped organize the rally, told ProPublica he met with Wren at the Willard Hotel in Washington on the evening of Jan. 5.

At that meeting, Stockton said, Wren boasted of having raised $3 million to support the rally. She also described how she had "parked" unspecified amounts of money for Jan. 6 at an arm of the Republican Attorneys General Association, at the Tea Party Express and at Turning Point, a collection of affiliated nonprofits that serve young Republicans.

Routing funds to multiple groups "added a layer of confidentiality for the donor and offered institutional support for the 6th," Stockton said.

Oh, hey, the Willard Hotel! That place where they had the command center for the protest.

In what is probably not a coincidence, Wren and Pierson were both subpoenaed by the January 6 Select Committee for documents and testimony. And it's probably a safe bet that if ProPublica has these texts and emails, so does the Committee.

How you livin', Kimmy?

According to the public interest media outlet, Guilfoyle and Wren were trying to get the rally organizers to let Roger Stone, Ali Alexander, Alex Jones, and Texas Attorney General Ken Paxton address the crowd on January 6. Trump's people had already put the kibosh on Stone, Alexander, and Jones, hoping to keep the more radical figures quarantined away from the president. Wren was apparently so aggressive about it that "a senior White House official suggested rally organizers call the U.S. Park Police on Wren to have her escorted off the Ellipse. Officers arrived but took no action."

Through her lawyer Joe Tacopina, Guilfoyle denies all the allegations, characterizing the texts with Pierson as "inaccurate" and "taken out of context."

"Your contention that Ms. Guilfoyle approved a speaking list for January 6th is patently false," he huffed to ProPublica, threatening to "aggressively pursue all legal remedies available."

And yet, here's Pierson bitching to Guilfoyle about a list of speakers including Stone, Alexander, and Paxton which appeared in Breitbart on January 3:

"All I know is that someone leaked a list of 'speakers' that the WH had not seen or approved," Pierson wrote. "I've never had so much interference."

Guilfoyle responded: "Yea and this the list we approved."

All of which makes it clear that White House staff and the Trump campaign engineered every aspect of what went on that day leading up to the riots. And Mark Meadows can STFU about executive privilege regarding his conversations with these people.

In the end, Guilfoyle got half of what she wanted. Jones, Alexander, and Stone were left off the roster, although Paxton got a speaking slot. More importantly, perhaps, Guilfoyle herself got a moment in the spotlight, if only to introduce her boyfriend.

"We will not allow the liberals and the Democrats to steal our dream or steal our elections," she shouted to the lunatic crowd assembled on the Ellipse. Then she hopped on a private jet bound for Florida with a couple of wealthy donors.

Always be hustling, right? Or answering subpoenas for documents and testimony, as the case may be.