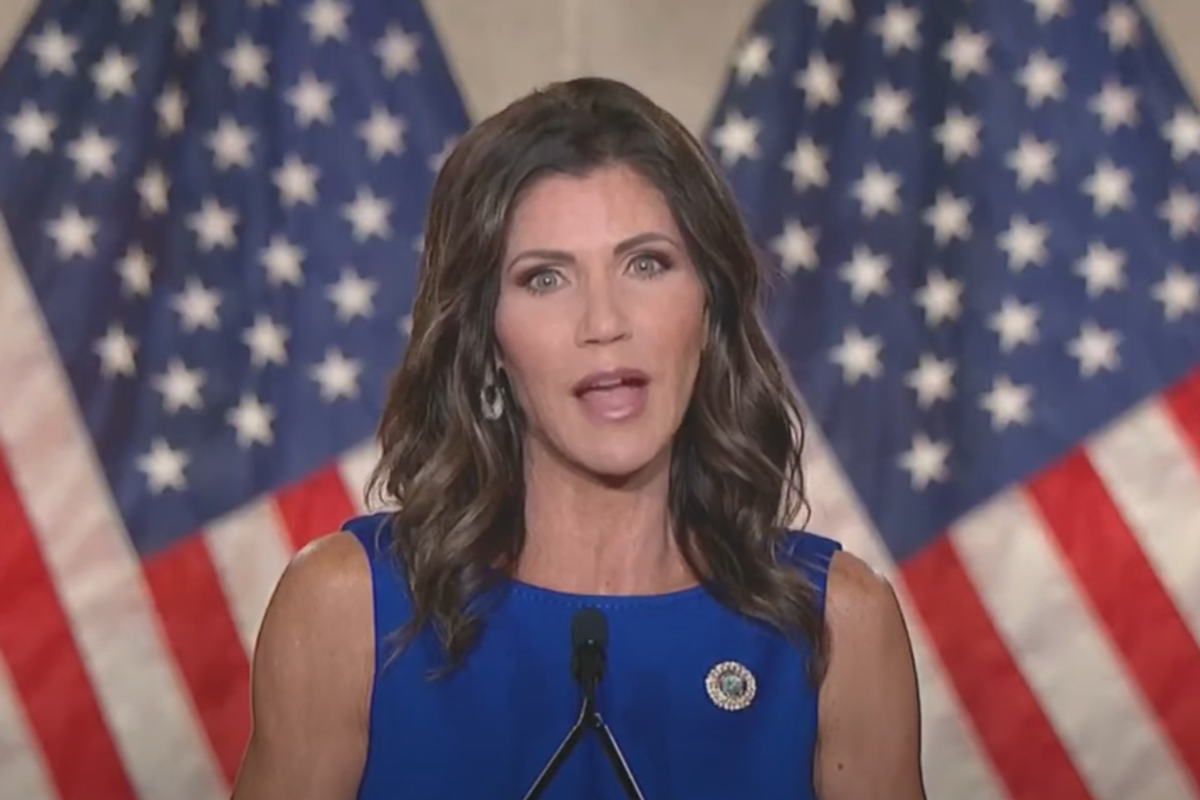 On Thursday, the state of South Dakota enacted a spate of new rules that Governor Kristi Noem and much of the state legislature have decided to pretend have something to do with "protecting women's health." The extremely expected "twist," however, is that like every other Republican measure to "protect women's health," this does the exact opposite.

Sadly, the only time Republicans seem to care about "protecting women's health" — or protecting anyone's health for that matter — is when it has something to do with abortion. In this case, it has to do with medication abortion.

As you may recall, pretty much the only good abortion news we got last year was the FDA permanently lifting the ban on telehealth abortions, which was ridiculous to begin with. We're now getting a backlash on that in the form of laws meant to make the most convenient means of exercising one's reproductive rights as inconvenient as possible.

The new rules in South Dakota not only ban the use of telehealth for abortion pills, but require three doctors' visits in order to obtain a complete medication abortion — the initial visit, the visit 72 hours after the initial visit where they actually get the mifepristone, and a third visit where they take the hormone blocker misoprostol. Usually, even when one gets a medication abortion in a doctor's office, the misoprostol is taken at home.

Noem's official statement on the new rules was as ill-informed as you'd think.

Chemical abortions are four times as likely to cause a woman getting an abortion to end up in an emergency room – and we have a duty to protect the lives of those women. [...] I look forward to the day when the life of every unborn child is protected in South Dakota. Until then, South Dakotans will know that if a mother uses abortion pills to end her unborn child’s life, she will not get those pills from a stranger over the internet.

First of all, literally no one is being forced to get abortion pills "from a stranger over the internet" — they are choosing to do things that way, because it is more convenient. Second, visits to the emergency room after medication abortions are far rarer than visits involving other kinds of medication. "Anticoagulants, antibiotics, diabetes agents and opioid analgesics" are responsible for the majority of emergency room visits for adverse drug events, and people are generally allowed to take those at home.

They're also much lower than for literally any other unregulated outpatient procedure.

This has nothing to do with health and everything to do with trying to scare people out of having abortions, because Kristi Noem doesn't like abortions. As PBS News Hour points out, there have been only 26 deaths related to medication abortion since it came on the market in 2000, whereas there are 150 deaths Tylenol-related deaths every year.

The new rules will also require abortion patients to be told that they can "reverse" their abortions after the first dose by taking a high dose of progesterone, which is not a thing and would be far more likely to result in an emergency room trip than taking the drug as prescribed. It's also very dangerous to just take the first dose without taking the second on time, a thing that could very likely happen because of how people have jobs to go to and may not actually be able to go to the doctor three times.

“How many women will be unable to comply, unable to return for the third time in about a week and decide they just have to take their chances and skip taking the second drug?” asked Nancy Turbak Berry, a lawyer representing Planned Parenthood, at the committee’s meeting last month. “How many emergency rooms and clinics in the outlying areas of our state are going to be faced with unnecessary medical emergencies?”

One medical trial, which published its findings in the journal Obstetrics and Gynecology, tried to study the effects of women either not taking the second drug or taking the hormone progesterone, which anti-abortion activists claim may stop a medical abortion. But the trial halted at just 12 participants after three were rushed to the hospital due to bleeding. Two of the women had not received any medication the second round; one had received progesterone.

No one's health is being protected here — and let's be real, under no circumstances do Republicans ever care, legislatively, about anyone's health. They hate health and safety regulations, they hate Medicare for All, they hate COVID mandates, they hate anything that might make it slightly more difficult to murder the environment, they hate people not dying of drug overdoses — hell, they hate healthier school lunches. The only instance I can even think of in which a Republican has supported any legislation at all having to do with protecting anyone's health was Bob Dole and the Americans With Disabilities Act, which just may have had something to do with the fact that it personally affected him.

We all know that this has nothing to do with that and everything to do with preventing people from having abortions, and pretending it's about "protecting women's health" is insulting not only to everyone's intelligence, but to the very notion of "protecting people's health" to begin with. Republicans love to insist that any efforts to protect people's health are actually about controlling them, and yet they seem to be the only ones who do things this way or even have any interest in controlling anyone else to begin with.