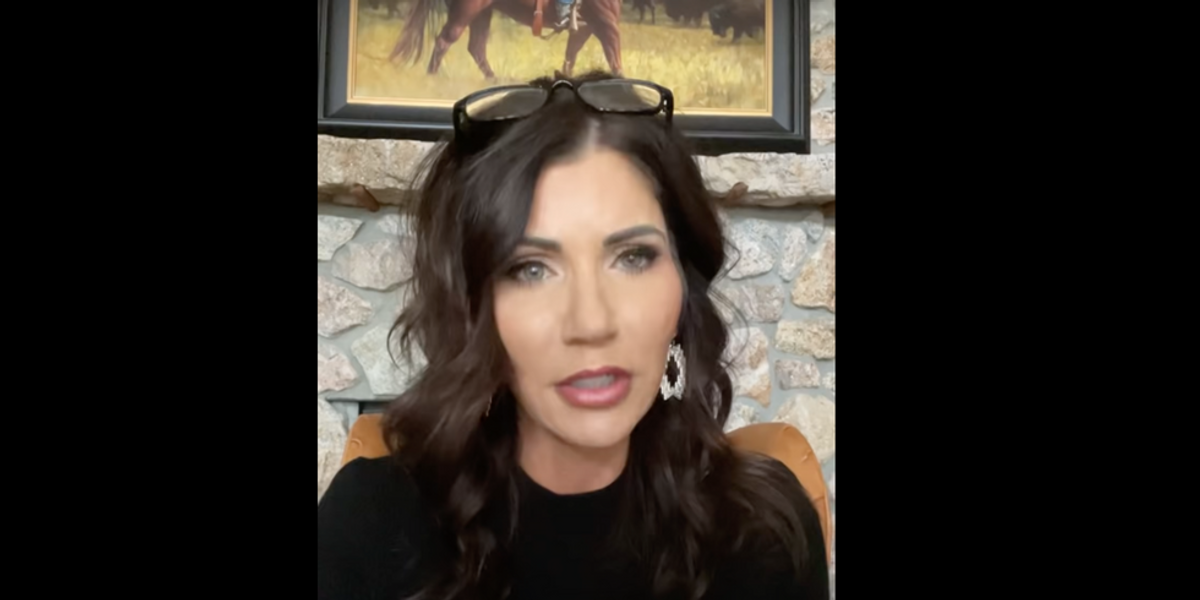 We have a brief update for you on the story of South Dakota Gov. Kristi Noem, a Republican who MAY POSSIBLY MAYBE PERHAPS have done a wee spot of nepotism when she reportedly leaned on the powers that be in her state to change their real estate appraisal licensing rules, yanking them into her office. You see, Noem's daughter Kassidy Peters was trying to get a certain level of certification, and it was denied. Noem denies doing anything "impropriety" or in any way asking for special treatment for her dear daughter, but the allegations were there and it looked bad.

And now Peters has announced she's QUITTING APPRAISING AND EVERYTHING IS TERRIBLE, YOU ALL HAPPY NOW?

Noem's daughter, Kassidy Peters, slammed a legislative inquiry and news reporting on the episode in a letter to Secretary of Labor Marcia Hultman. She also released a document that a legislative committee was seeking to subpoena. Lawmakers were zeroing in on the timeline of a meeting Noem called last year that included Peters and key decision-makers in a government agency that had moved days earlier to deny her application for an upgrade to her appraiser certification.

"I am writing you today to express my disappointment and anger that my good name and professional reputation continue to be damaged by questions and misinformation concerning the Appraiser Certification Program," Peters wrote to Hultman in the letter, which was obtained by The Associated Press. KSFY first reported the contents of the letter.

She told Hultman she would turn in her appraiser license by the end of the year, adding "I'm angry and I can acknowledge that this has successfully destroyed my business."

Oh golly, well that's all a shame. Maybe next time she has a business, her mom the governor shouldn't do anything that appears "impropriety" with the state regulators overseeing that business, allegedly.

The Associated Press includes an interesting detail, namely that Labor Secretary Hultman had claimed last month that the powerful appraiser certification people were already going to give Kassidy Peters an extra chance to get the certification she was seeking before Governor Mommy pulled everybody into her office. And there was a document to prove it!

But the signed agreement with Peters is dated the week after the July 27, 2020, meeting.

The governor's office referred a request for comment to the Department of Labor and Regulation. The department in turn released a letter from Hultman to lawmakers that blamed the AP for giving "the impression I testified at the hearing that there was an agreement in place with Ms. Peters before the hearing."

The AP has not reported that Hultman said the agreement was signed before the meeting.

There are more details in the AP's article if you'd like to read them, but what it sounds like to us is that SOMEBODY got caught telling a fib.

Well boy howdy, we sure do hope everybody in the Noem family has learned whatever lesson the Lord was trying to teach them with all of this, and as riveting as we find South Dakota real estate appraisal drama, we are probably done with this story, unless the Noem family finds a way to make it stupider.