Skip to content
Kyrsten Sinema has been trolling us with her public silence for months. Now she's deigned to give an interview to Politico, and she's still trolling us.

Her main point is that she still doesn't have to respond to the lowly peasants who dare to ask her what she stands for.

... And even though she’s quietly informed Democrats for weeks that she’s supportive of Biden’s social spending and climate bill and publicly signaled she wants to clinch a deal, she still won’t explicitly say she’ll back it — even after the House passed her infrastructure legislation.

“If you're in the middle of negotiating things that are delicate or difficult ... doing it in good faith directly with each other is the best way to get to an outcome,” Sinema said just a few minutes after returning from Biden’s signing ceremony. “I'm still in the process of negotiating the second provision of the president's agenda ... and I don't negotiate in the press.”

She seems not to understand how democracy works, or pretends that she doesn't.

“I've been concerned at the push that happens in both parties, this push to have no disagreements. To only have unity or to only speak with one voice. And some will say, ‘Oh, that is our strength,’” Sinema said. “Having some disagreement is normal. It is real, it is human. And it's an opportunity for us as mature beings to work through it.”

(Yes, but in a Senate where your party can win a vote on a reconciliation bill only if every member is on board, you eventually have to have "no disagreements" on the text of the bill, or at least no disagreements on whether to vote for it.)

Also, she apparently believes that she's a private citizen, and that the rest of us are intruding on her private life.

... she’s definitely fed up with the emerging niche literary genre regarding what she wears on the Senate floor — something her male colleagues don’t have to endure.

“It's very inappropriate. I wear what I want because I like it. It's not a news story, and it's no one's business,” Sinema said. “It's not helpful to have [coverage] be positive or negative. It also implies that somehow women are dressing for someone else.”

Since when is it "no one's business" what public figures wear? If Sinema doesn't want her very eccentric clothes written about, she should get a job in the private sector, where her fashion choices would merely be the subject of endless water-cooler conversations among her colleagues. And while I'd normally be sympathetic to the complaint of sexism, the main reason her male colleagues in Congress aren't subject to this is that they wear boring, predictable clothes. But President Obama was mocked for wearing a tan suit. (The tan suit controversy was such a big deal that it has its own Wikipedia entry.) Donald Trump was mocked for excessively long ties, ill-fitting untailored clothes, unnatural orange skin, and ridiculous hair. And decades ago, when a man in Congress embraced eccentricity as Sinema does, believe me, he was mocked. Behold the much-derided hair -- or, rather, toupee -- of James Trafficant, who held a congressional seat from 1985 to 2002, and later went to prison: 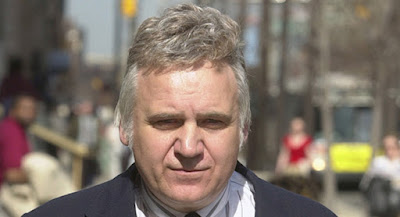 But I need to get to the real news in this Politico story, which is buried several paragraphs deep. We're told upfront that Sinema considers the top Republican leaders in the Senate to be boon companions, even though she's not planning to switch parties.

Watch the Senate floor enough and you'll notice Sen. Kyrsten Sinema regularly chatting with Mitch McConnell and his top deputy John Thune. Republicans have even tried to recruit her to their conference, and throw the Senate to the GOP.

Don't worry though, Democrats: Sinema's not becoming a Republican.

The friendship with McConnell, we're assured, is merely because he's a delightful raconteur.

Sinema also revealed why she’s constantly spotted on the floor chatting with GOP leader McConnell: “He has a dry sense of humor. It's underrated.”

... She insists those relationships are not transactional but instead reflect the fact that “I’m a human who has friends.”

(This "human who has friends" seems to have few friends who are Democrats. Apparently no member of her own party is as much of a scintillating wit as ... Mitch McConnell.)

So Sinema hangs with Republicans, but won't try to become one. However, we're informed of this well into the story:

Sen. John Cornyn (R-Texas), a prospective successor to McConnell, went as far as to say he “would be surprised if Republicans tried to unseat her” in 2024 if she runs.

This is news. Assuming Sinema either survives a Democratic primary in 2024 or runs as an independent, the GOP might just take a dive and let her win.

That, of course, is what happened in Connecticut in 2006, when Senator Joe Lieberman, running for reelection and still a big supporter of George W. Bush's war in Iraq, lost the Democratic primary and then ran as an independent: The Republican candidate, Alan Schlesinger, all but disappeared, spending only $38,001 on the race (Lieberman and Democratic nominee Ned Lamont each spent millions). In Arizona three years from now, Republicans might well decide to save their money and nod-and-wink to their voters that they should support Sinema, too. (Expect her to make frequent appearances on Fox News during the general election capmaign.)

Why not? On the one thing Republicans really care about -- pampering rich people -- Sinema is in complete agreement with their party. And if she runs indie and they need her in order to attain a Senate majority, I'm sure she'll agree to caucus with them once she's safely reelected. Just don't ask her during the campaign whether she might do that -- she'll undoubtedly say it's a rude question and she's entitled to her privacy.

Asked @JohnCornyn about this a moment ago and he clarified that the GOP WILL support a candidate to defeat @SenatorSinema in 2024.

He adds: “I do appreciate Sen. Sinema working constructively in a bipartisan way to get some things done.” https://t.co/dI6lftETWf

Technically, Republicans offered some support to Alan Schlesinger in Connecticut in '06, so we'll see what this really means.